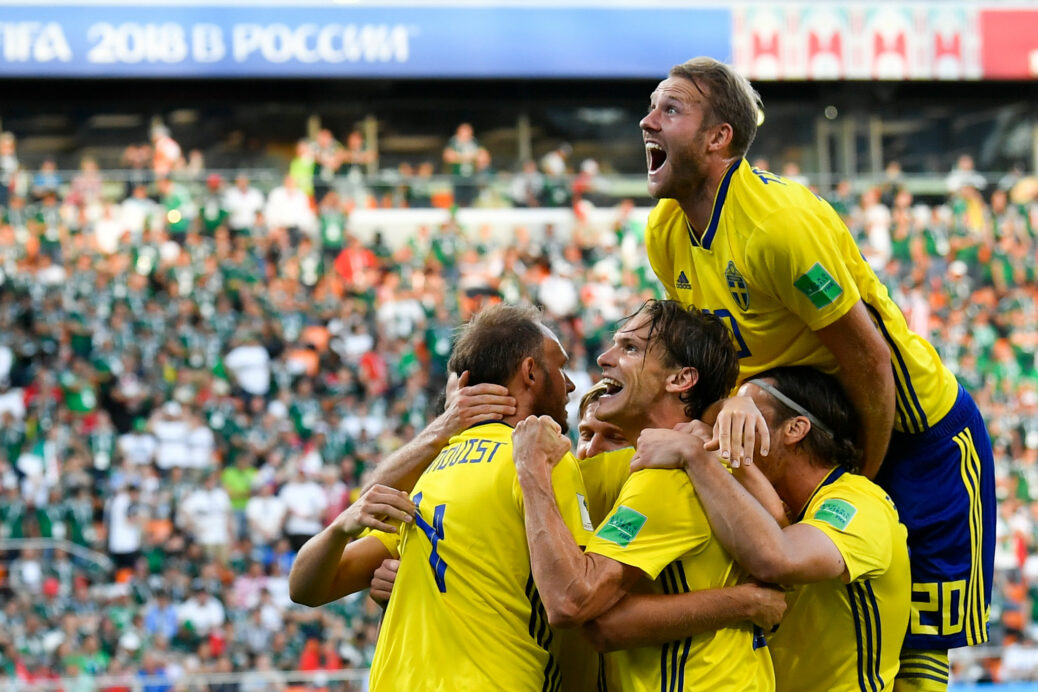 The Swedish National Team probably was not the first choice to advance to the knockout stage in the World Cup. Getting paired with international heavyweights Germany and Mexico in Group F added to the difficulty waiting for Jan Olof Andersson’s side this summer in Russia.

Despite the amount of talent on the other three teams in their group, Sweden stayed true to themselves and finished first on six points after a 3-0 triumph against Mexico on Wednesday. A trio of second-half goals helped the Swedes to a shocking victory over their CONCACAF opponents, who would later drop to second in Group F.

It’s been an interesting tournament for the Swedes, who did a great job overall just to make it to Russia. After finishing second in their UEFA qualifying group and holding off a late surge from the Dutch, Sweden eliminated one of the World’s elite nations in a two-legged playoff.

A slim 1-0 win over Italy last November shocked the footballing world as the Swedes prepared for their first major competition, without star forward Zlatan Ibrahimovic. Defense became the focal point for Andersson’s team, who allowed only nine goals in 12 qualifying matches.

That trend carried over this summer as Sweden allowed only two goals in three group stage matches. A heartbreaking defeat to Germany looked to have broken the Swedes’ spirits ahead of their final showdown against El Tri. Little did we know it added to their preparation and helped them rise to the occasion.

Highlighted by captain Andreas Granqvist, Sweden was able to pester and frustrate El Tri for the entire 90 minutes. Experienced right back Mikael Lustig shut down the in-form Hirving Lozano, while forwards Javier Hernandez and Carlos Vela were held to a combined zero shots on goal.

Granqvist and fellow defender Ludwig Augustinsson each bagged goals, while an own goal by Mexico defender Edson Alvarez was the icing on the cake. After not qualifying for the last two World Cups, Swedish fans in Yekaterinburg and back home were able to celebrate like they had won the entire tournament.

The Swedes may not have any World Class stars on their roster, but they do have a hard working core that lead by example. Lustig and Granqvist each have over 65+ caps each and are anchors to a stubborn backline. Emil Forsberg and Viktor Claesson are talented playmakers who look ready to be the next generation of Swedish midfielders. Marcus Berg and Ola Toivonen are experienced veterans who knows how much efforts needs to be put in.

Now as they prepare for a date with Switzerland in St. Petersburg next Tuesday, Sweden will have to continue doing what got them here. Dealing with the feisty Xherdan Shaqiri will be a tough challenge but knowing they have already silenced players such as Son Heung-Min, Timo Werner, Chicharito, and Lozano will be great motivation.

Will their backs be up against the wall? Absolutely. Are they up for a challenge? Wednesday’s performance against El Tri should answer that question. Sweden will be expected to edge the Swiss but it won’t come easy. Playing as a unit that allowed only nine shots on goal so far will make them more comfortable, knowing they can advance even further in the tournament.

Wednesday’s win marked the first time since 1958 that Sweden topped their group at a World Cup, the last coming on home soil. That year they would finish as runners-up against a future legend named Pele. Can Sweden take a few more scalps along the way? Definitely, but first they will savor the moment of finishing first in a group many thought they wouldn’t get out of.