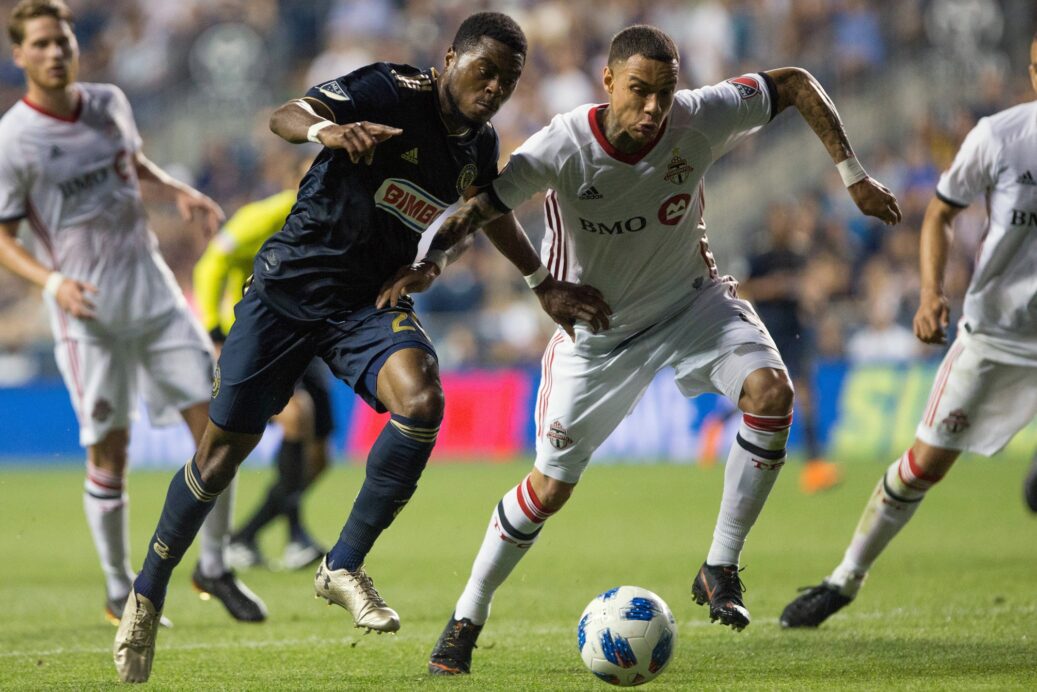 CHESTER, Pa. — When you’re finding it tough to seek consistent results, sometimes as a team you just need your talent to push you through.

Toronto FC showed that talent on Friday night, using a brace by midfielder Jonathan Osorio to down the Philadelphia Union 2-0 at Talen Energy Stadium.

Alex Bono came up big early for TFC, as he stoned Fafa Picault on a breakaway in the 13th minute. The 27-year-old was played in and got the better of Nick Hagglund but the American keeper stood strong and kept the forward out.

Toronto’s class was on display as Osorio put Toronto ahead in the 19th minute. Michael Bradley hit Victor Vazquez with a pass allowing the Spaniard to seek other a forward option. Vazquez’s pass split the Union defense allowing Osorio to streak down the middle and beat Andre Blake into the bottom-left corner. It was Osorio’s third goal of the season.

As the half went on, Philadelphia had their chances to level things. A Warren Creavalle redirection was whistled offside by referee Baldomero Toledo, while Ray Gaddis and Picault also had efforts.

The Union’s pressure continued in the second-half with the hosts inching even closer to an equalizer. Picault’s right-footed curler in the 58th minute had Bono scrambling to his left, but the effort rattled the crossbar keeping Toronto in front.

A poor throw in by the Union allowed Toronto to ice the match in the 79th minute, with Sebastian Giovinco playing in Osorio for his second.

Bono made four saves in the win for TFC, their fourth of the season. Blake recorded two saves as the Union were held goalless at home for the first time since April 13th.

The Union (5-7-3) head on a two week break from league action before hosting the Vancouver Whitecaps on June 23rd. Toronto (4-7-2) returns home for a date with D.C. United on June 13th before an 11-day break of their own.

Osorio shined brightest for TFC, scoring a pair of goals on good finishes. His first was a brilliant curled effort past the Jamaican keeper Blake, while his second was a composed finish.

Picault’s screamer off the crossbar kept Philly optimistic to get a point, but eventually they could not build from it. A little lower and the Union may have gotten a result against the defending champs.

Offensively, the Union showed problems that have haunted them in the past. C.J. Sapong continued his cold run of form for Philadelphia and was later subbed in the second-half for Cory Burke.