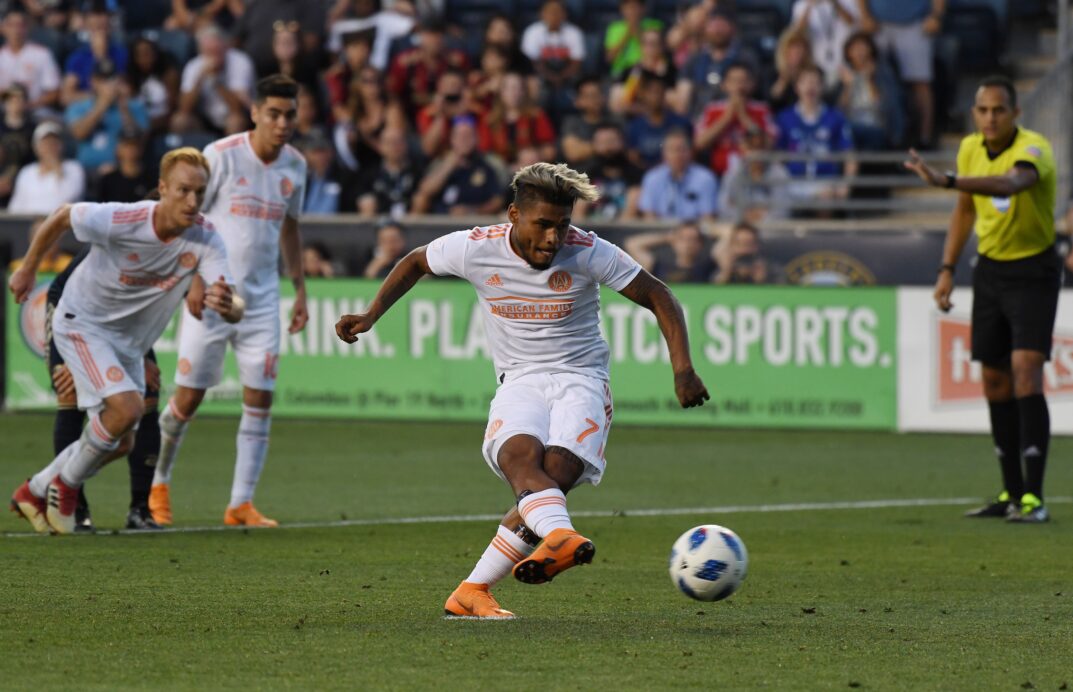 CHESTER, Pa. — Finding a consistent striker is a hard job for any General Manager or Scouting Department in MLS, but when it does work it pays dividends in the end. Atlanta United has their main man up top who is continuing to impress week after week and is inching even closer to the MLS single-season goalscoring record.

Venezuelan striker Josef Martinez bagged his 18th goal of the 2018 season on Saturday night, helping Atlanta to a 2-0 victory over the Philadelphia Union. It was the 13th match this season in which Martinez found the back of the net out of the 20 matches Atlanta has played. The forward stepped up and scored from the penalty spot in the second-half, while also adding an assist on his side’s insurance goal at the end.

He has scored in three straight matches for Tata Martino’s side and has tallied nine goals since the start of June. Every time you think a team would find the way to shut him down, Martinez makes them pay in the end. His hot run of form now sees him nine goals shy of the league’s record for most goals scored in a single season.

Roy Lassiter, Bradley Wright-Phillips, and Chris Wondolowski all are tied with 27 and Martinez would welcome the record with open arms if he were to achieve it.

“I hope I am able to break it,” Martinez said. “The main goal for me is to help my team win and if that means scoring a lot of goals then I will welcome that. But at the end of the day my job is to help Atlanta win games.”

Martinez broke onto the scene in 2017, scoring 19 goals in his debut season in MLS. Scoring only seven goals over a three-year span with Serie A outfit Torino from 2014-17, Martinez was in need of a move to a place where he could start consistently.

After a terrific season a year ago, Martinez has carried that momentum onto this year where he has helped Atlanta sit atop the MLS standings on 40 points. He has been able to become an all-around forward by helping in possession, the build-up play offensively, and an assist man for his teammates. His goals are what gets him the recognition he deserves, but Martinez feels he has grown in all aspects for his team.

“Maybe this season is just more noticeable just because of the style we’re playing,” Martinez said. “We want every guy to help out on the team, whether it’s a guy like Miguel who gets the ball we all want to be there to provide an option offensively. We want to be able to contribute in any way possible, whether it’s scoring or assisting on goals.”

Martinez is definitely fortunate to have had such a slew of attacking talent from day one. Almiron is one of the top playmakers in the league, while Hector Villalba adds grit and physicality along with Martinez. The acquisition of Ezequiel Barco brings yet another talented player into the already dangerous front.

Chemistry has grown between this quartet and looks to show zero signs of stopping. As Atlanta seeks a championship in their second season in MLS, Martinez feels that chemistry will need to continue to grow as the season half of the season approaches.

“The chemistry is getting better between us as we play more and more together,” Martinez said. “With Barco he’s only been here a few months now so that’s taken us a little time, but with Miguel and Tito I can take one touch and already know where those guys are going to be. Naturally the more we play with each other, the chemistry will continue to improve.”

Martino is definitely no stranger to talented players on his roster. The former Barcelona and Argentina manager has coached the likes of Lionel Messi, Neymar, Alexis Sanchez, and Andres Iniesta during his days overseas. Martinez may not be on the same level as Martino’s former class, but the 55-year-old believes that his forward is growing right in front of his eyes.

“I’m really happy with how Josef is playing, but especially on how he is affecting the matches in other ways,” Martino said. “He is providing assists to other players on the team even when he is not scoring. He may not score but he is playing other dangerous attackers in.”

“This season he has grown even more as a player and I think if he continues to do so, then it will only help us achieve our goals as a team.”

Atlanta (12-4-4) returns home for a July 15th clash with the Seattle Sounders, with Martinez needing 10 goals in 14 matches to put his name first in the single-season list.