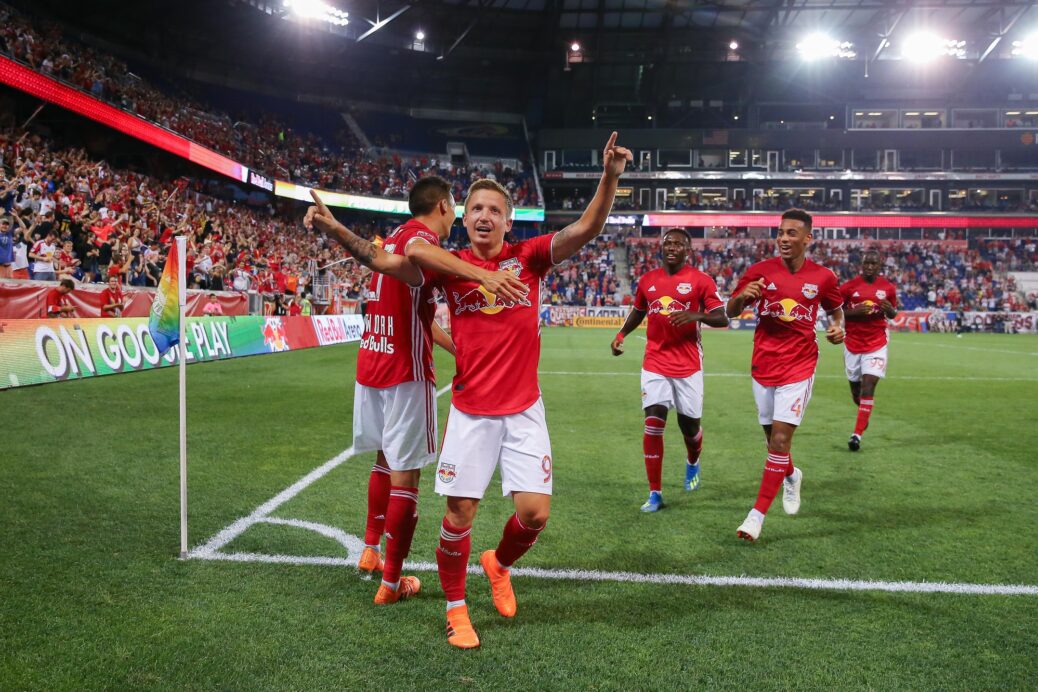 It was always going to take time for the New York Red Bulls to gel under new head coach Chris Armas. A derby defeat to NYCFC in the dying moments at Yankee Stadium didn’t help his cause last weekend, but the Red Bulls surely wouldn’t let that come again on Saturday.

German midfielder Marc Rzatkowski’s brace in a seven-minute span in the second-half propelled New York to a 3-2 home triumph against Sporting KC. It was the 28-year-old’s first goals in MLS after his move from Red Bull Salzburg this offseason, which now adds another goal scoring weapon to Armas’ arsenal.

“It really means a lot to me, I’m really just happy for the entire team and to be able to help with two goals,” Rzatkowski said. “There have been a lot of ups and downs this season for me with being injured, but I’m happy to be able to prove to the team that I can help.”

“I just wanted to come onto the pitch and improve the whole game for us. It was not only me, Derrick and Amir came on and did very well too so we’re happy it ended up our way in the end.”

Rzatkowski had seen some time under Jesse Marsch, but hadn’t registered a point since June 9 at Columbus. He had shown some flashes of his creativity in the midfield, but found it tough to beat out Alex Muyl, Daniel Royer, and Kaku for a spot in the starting XI. The German replaced Kaku in the 60th minute which was a surprising substitution with the hosts fighting to tie the match. Armas praised Rzatowski’s week of training and knew he would be a guy to call on if things got shaky.

“Marc had a great week of training and every session brought energy and his talent to the mix,” Armas said. “He showed a lot of life and coming into the game we knew he would be someone we could rely on if we needed it.”

“I had a talk with all of the players on the roster when I took over and told them where they stood and where they needed to be to play,” Armas said. “Marc was also involved in those conversations.”

Saturday’s win helped the Red Bulls move to five points behind NYCFC for second place in the East. Their home unbeaten run in league play extended to five matches, where they have outscored their opponents 13-3 and kept three clean sheets.

Midfielders Tyler Adams and Sean Davis were huge in helping the Red Bulls quiet some of KC’s attackers, helping hold Daniel Salloi, Yohan Croizet, and Gerso Fernandes off the scoresheet. While Adams continues to become one of the top young talents in the U.S., Davis’ organization in the Red Bulls defensive set up has not gone unnoticed as he continues to grow into a top player in MLS.

“Sean Davis continues to grow, as a soccer player understanding how to play the No. 6 and be a leader,” Armas said. “He’s the guy when you scour video after the match he’s the guy pointing teammates in directions, organizing and running the show. I think he will continue to be a big player for us this season.”

“We knew tonight would be a conflicting match with two teams facing one another under very different styles,” Armas said. “I think the first half they powered us a little but the second half we pushed our way back.”

The Red Bulls next close out a two-match homestand on July 21st with an Eastern Conference clash against the New England Revolution. As for Armas, he will learn from the success of Saturday’s victory but also notice the changes that need to be made as New York continues to stride up the table.