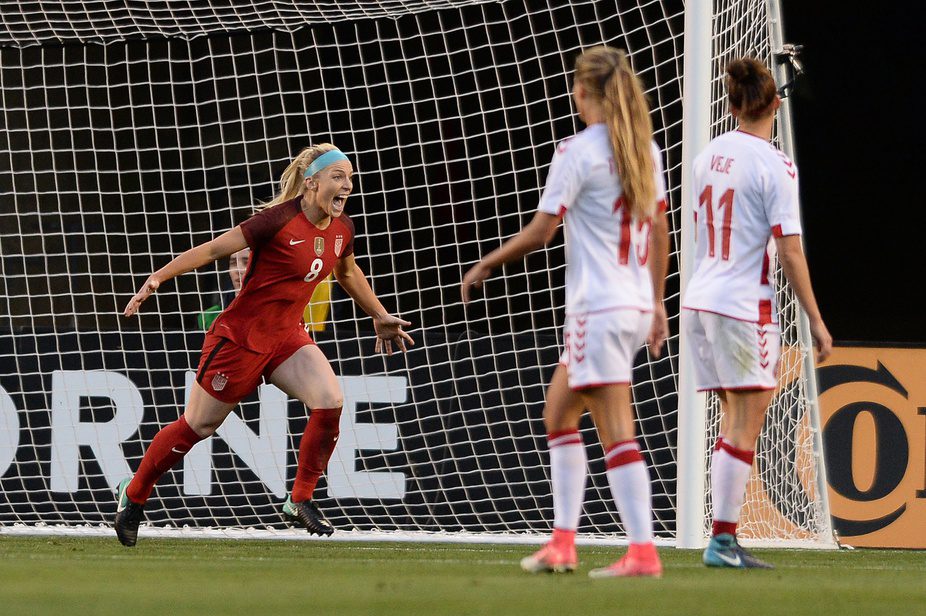 Julie Ertz and her teammates on the U.S. Women’s National Team are running into a busy few months.

While many of them are in the playoff hunt for their club teams as the National Women’s Soccer League regular season approaches its end, the team itself is in the final stages of preparing for October’s Concacaf Women’s Championship. Yet, according to the midfielder, the mood in the USWNT camp before World Cup qualifying is positive.

For starters, Ertz calls the combination of club and country responsibilities “fun,” though it obviously ties in to the team’s recent form.

“We feel like we’re in a good spot to continue off of that as well,” Ertz told SBI Soccer at the start of the team’s first camp since winning the Tournament of Nations. “These are the last games obviously going into [the Concacaf Women’s Championship], so a lot of excitement, really, I feel like is the biggest feeling.”

Before they compete in the quadrennial World Cup qualifying tournament, though, the U.S. has one more friendly against Chile. The first game of the two-game series resulted in a 3-0 USWNT victory on Friday.

The matches present a unique opportunity, as they serve as the first-ever meetings between the world’s number one team and the 39th-ranked Chile. Though it’s one of the lower-ranked teams the U.S. has faced in the two years since the 2016 Olympics, Chile will provide an appropriate test before October’s all-important tournament.

“South American teams — they’re very technical in their style of play,” Ertz said, “So they do give you a lot of challenges. Playing a team that you’ve never played before, the cool thing is that it helps you for qualifying or a big tournament in general because you could think they’re going to play one way and [they] come out a completely different way, so it’s going to be a cool game to see, as we’re playing, to see what they’re doing.”

Naturally, the U.S. wants to see how it stacks up against a side like Chile, who showed its commitment to pressing and playing out of the back on Friday.

In particular, the U.S. midfield will be an area of interest, as an injury crisis has led to many players splitting minutes, and Ertz partnering with nine different players in a midfield three this year. There has been difficulty finding the perfect balance among them all, but in that, too, Ertz has found positives.

“I think it’s really challenged me in such a unique way and it’s helped me, I feel, grow and see [the game] in a different light through other people’s eyes,” Ertz said about partnering up with different players. “I’ve really enjoyed it and learned a lot from every individual that comes in.”

The experience has been helpful as Ertz has been making her name as a defensive midfielder after breaking out for the national team as a center back. It was a transition she made last year for club and country, impressing on both ends. For her, though, the newness is still there.

“I got a different challenge and a different obstacle of a different position, so that’s been a fun change as well as a challenge,” Ertz said. “For so long, I’ve been a defender, so I’m probably usually a lot more defensively minded. I think for me, obviously as a six, it’s more defensive before attacking, but I would like to improve both to being able to attack and shoot and all that kind of stuff as well.”

A little more than four years after earning a regular starting spot on the national team, though, Ertz is more equipped to handle such changes.

“In the last World Cup, I think I was pretty naive in a lot of things,” Ertz said. “[It] probably helped me in a lot of things as well, but I do feel like I’m a more experienced player, all the way down to tactical game management to how I view the game as well.”

Ertz will likely be a key player in the USWNT’s World Cup title defense next summer as she continues to advance her game and aid her teammates in that quest to once again be world champions. Whether or not they are ready to do that just yet, though, is not on Ertz’s mind.

“I’m not looking past October,” she said. “I think, after October, I might be able to answer that question.”