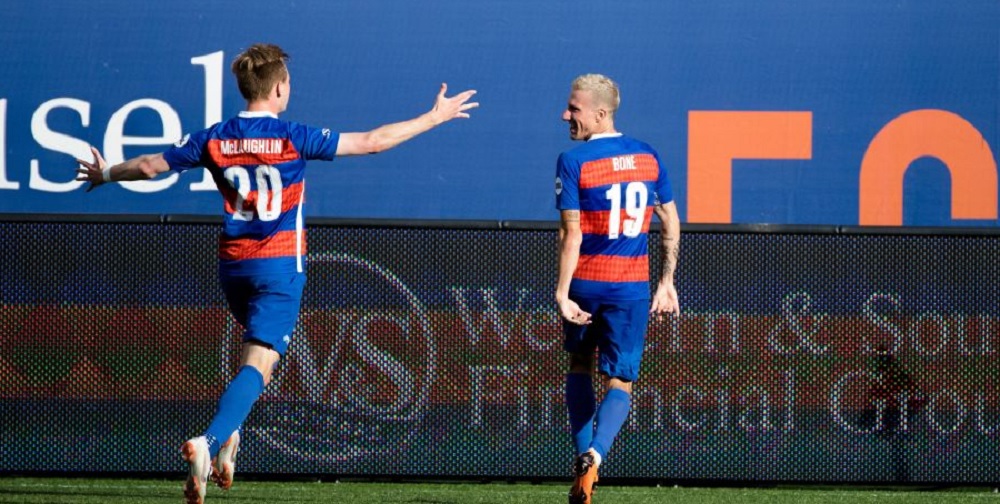 FC Cincinnati continued to their domination of the USL in their final season before joining MLS. Their 66 points are 16 more than their nearest competition in the Eastern Conference. Their latest triumph came in front of 27,275 against Toronto FC II.

Elsewhere, Orange County SC climbed to the top of the Western Conference, Portland Timbers 2 won their third in a row, and Reno 1868 got a big win over LA Galaxy II.

Here’s the full rewind of the weekend of USL action:

FC Cincinnati maintained their assault on the record books and the USL’s Eastern Conference table with their seventh consecutive win on Sunday, beating Toronto FC II 4-3 in a wild match at Nippert Stadium. FC Cincinnati, which will move to MLS for the 2019 season, rode a brace from Corben Bone on the midfielder’s 30th birthday after Toronto took the lead through a stunning finish from Japanese hitman Tsubasa Endoh.

Tokyo-born Endoh produced a man-of-the-match performance for Toronto in the loss that saw the former Maryland Terrapin end the match with a thundering hat-trick. Forrest Lasso and Fanendo Adi added to Bone’s double with a goal apiece for FC Cincinnati, who will no doubt be looking for a deep playoff run in their final season in the USL.

Louisville City FC’s Cameron Lancaster felt obliged to join the Goal of the Week party with a brilliant turn and strike that gave his team a lead just after the half-hour mark against the Pittsburgh Riverhounds. The back-and-forth match between two of the top three clubs in the Eastern standings ended in a 2-2 draw, with Pittsburgh’s veteran Jamaican winger Kenardo Forbes snatching a stoppage-time equalizer just five minutes after the Riverhounds climbed back into the match through an own-goal that was credited to Louisville goalkeeper Gregory Ranjitsingh.

Denmark international winger Thomas Enevoldsen sublimely
slipped in Powder, who made no mistake with his left-footed finish in the 84th minute.

Portland Timbers 2 won its third match in a row to move into fourth place out West with a 2-1 win over the Las Vegas Lights at Cashman Field in Sin City on Sunday, behind goals from Colombian striker Victor Arboleda and Venezuelan midfielder Renzo Zambrano. Arboleda proved to be an inspired halftime substitution from T2 Head Coach Cameron Knowles, whose team had fallen behind to a clean strike from Raul Mendiola after a fine piece of build-up play down Vegas’ left wing and a slick cross from Matt Thomas.

T2 have four matches remaining in 2018, with a mouthwatering showdown with Phoenix Rising set for the final weekend of the regular season on October 13 th in the Valley of the Sun.

Phoenix clinched their place in the 2018 USL Playoffs on Saturday night as they continued their ascent toward the top the Western Conference table with a narrow 1-0 victory at Cheney Stadium in Tacoma against the Seattle Sounders 2. Chris Cortez bagged the winner in the 16th minute for the team best known for a combination of their push towards MLS and their celebrity owners: Didier Drogba, Brandon McCarthy, and Diplo.

A lovely piece of play between right back Saad Abdul-Salaam and Ghanaian midfielder Solomon Asante tore through S2’s defense, with Cortez casually finishing with his left foot after Nick Hinds’ sliding clearance fell kindly to the former University of California Golden Bear.

S2, one of just five teams across the US that have already been eliminated from playoff contention, had its fair share of chances against Phoenix. Perhaps their best was a powerful, dipping free kick in the 84th minute from David Olsen that forced Phoenix number one Carl Woszczynski into a top-shelf save, as S2 had huge swaths of possession throughout the match.

But it was Phoenix Rising that had the better of the chances, with Cortez denied his brace by the post in the 87th minute after a Bolshoi-worthy pirouette from Asante saw the diminutive midfielder find Cortez with an inch-perfect ball to the back post.

Reno 1868 FC grabbed a priceless three points at Greater Nevada Field on Saturday evening against the Los Angeles Galaxy II through a sensational, near 30-yard strike from Eric Calvillo. Calvillo’s first career goal for Reno left Los Dos goalkeeper Eric Lopez with no chance in a game that was bossed from start to finish by the hosts. South African Lindo Mfeka hit the crossbar just before the end of the first half as Reno went in search of their second. Duke Lacroix had a chance to seal the win for Reno in the 49th minute, only to see his strike blaze wide after he’d rounded Lopez.

Calvillo’s brilliant winner is destined to be joined on the USL Goal of the Week vote by another world-class strike from Colorado Springs Switchbacks FC winger Saeed Robinson. The Jamaican winger’s second highlight-reel strike in as many games at Weidner Field gave the Switchbacks an early lead over the visiting Rio Grande Valley FC Toros on Saturday, before a second half equalizer from Nicolas Perea split the points between two teams who remain on the outside of the playoff picture.