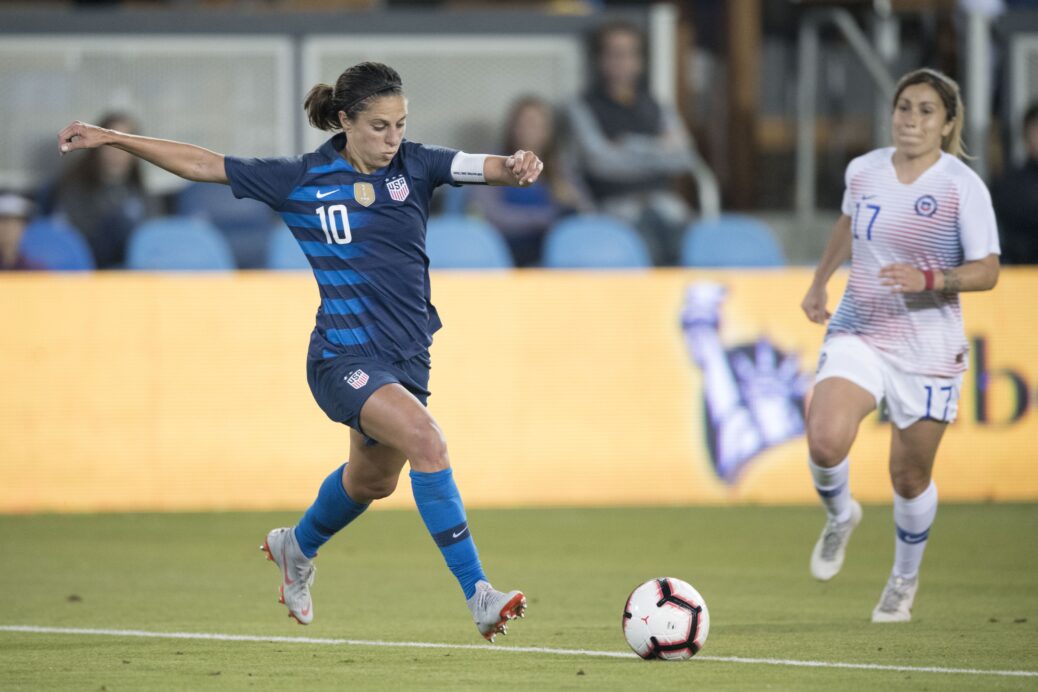 The U.S. Women’s National Team cruised to expected victories against a first time opponent in Chile over the last week in their final preparation for next month’s Concacaf Women’s Championship.

Posting two consecutive shutouts for the first time in more than a year, the U.S. team posed more of a test for Chile, who will be competing in the World Cup for the first time next year, than the other way around. Despite Chile’s commitment to the press and playing out of the back, it was not enough to create too many meaningful opportunities or a lot possession.

For the USWNT, that resulted in a pair of matches they were able to dominate easily, but not matches from which a lot of conclusions can be drawn. The team once again relied on set pieces, scoring four out of their seven goals on them in both matches, but they were standard performances against an inexperience opponent.

However, there were a few standout individual performances along the way for the USWNT. Tobin Heath was one of them, recorded two assists and a goal in both matches, while others continued to boost their own profiles ahead of next month’s World Cup qualifying tournament.

Here is a closer look at how the players fared in the matches against Chile:

Playing only the first match, a 3-0 victory at the StubHub Center, Naeher did not have a lot to do. Chile managed just a single shot on goal, which the goalkeeper handled easily.

Harris was probably less busy than Naeher, playing in the team’s 4-0 victory on Tuesday night. Like Naeher, she only had to make one save, but was otherwise unseen during the match.

As is usual for Sonnett, she was solid defensively in her 90 minute shift on Friday. The right back still lacks a little bit of comfort going forward, but seems to be filling the role adequately, having been the frequent starter in the position all summer.

Making her first start in 2018, Short played around 80 minutes on Tuesday before once again leaving the field with an injury. In that time, though, she did enough defensively to keep any attempt at a Chile attack at bay. That said, she was more error prone than Sonnett, but nothing resulted in a major chance for the opponent.

Playing only half an hour across the two friendlies at right back, O’Hara’s minutes were more about regaining fitness. She did manage to get forward a few times and show off her attacking ability, though.

Davidson was one of the few to play all 180 minutes, and also had little to do as a center back. However, she did record her first international goal and an assist over the two matches, proving herself capable on set pieces.

Like the goalkeepers, Sauerbrunn had a limited role in this pair of friendlies. She did well when called upon, but was otherwise inactive as she played all of the first match and the last 16 minutes of the second.

Getting 90 minutes on Tuesday, Dahlkemper also registered a solid performance that left her mostly invisible through long stretches of the match. She was occasionally a bit slower on the ball than her teammates, but it did not make matters worse for the USWNT.

The UCLA center back got 16 minutes at the end of the first match, meaning there was not a lot left for her to do at center back.

Playing all but a half-hour at left back during the two friendlies, Dunn continues to excel as a wingback of sorts for the U.S. team. Her greatest quality as a player is perhaps her attacking prowess, which she is able to demonstrate frequently in the role. She provides strong support for the forward line while continuing to be consistent defensively.

Ertz proved to be hard to get through for Chile, which is why everyone behind her played smaller roles in this set of friendlies. She continues to be consistent in defensive midfield, as she also easily allowed the team to transition from defense to attack.

Getting all of the second half on Friday, she had to come off after five minutes on Tuesday after picking up an elbow injury that will keep her out of the NWSL playoffs and likely out of the Concacaf Women’s Championship. In that 45 minute shift, though, she proved herself a reliable backup to Ertz, showcasing her dominating physical style of play.

Brian’s 130 minutes over two matches were a mixed bag. At times, she looked better than she has all year in a U.S. jersey, doing a lot of important defensive work. Yet, she gave the ball away more frequently than she should have, leaving her spot on the Concacaf Women’s Championship roster uncertain.

Horan’s versatility and consistency has finally earned her a regular spot on the field for the USWNT. She played both attacking midfield and a bit deeper in the two friendlies and performed well in both positions, easily starting up attacks. She may be the key to the team’s midfield consistency.

Mewis got under half an hour on Friday, leaving her with limited time to make an impact.

Lavelle’s recovery from injury has continued to be a smooth one, playing about 100 minutes over the two matches. Active in attack as the most forward midfielder of a three, Lavelle easily connected with the players in front of her and created a few opportunities of her own.

Playing the full 90 minutes on Friday, Press continued to establish herself as an option on the wing. Playing on the right of the forward line once again, she pressed the Chile defense all night and even scored an impressive goal from a tight angle.

Making her first minutes since recovering from a hamstring injury, Pugh was back in fine form against Chile. Getting the assist on Press’s goal on Friday and scoring herself on Tuesday, she was an attacking presence that was hard to ignore.

It was perhaps not her best pair of matches for Morgan, but not for lack of trying. She was active in attack as always, and was able to create opportunities as well in addition to being involved at the end of them. She walks away with no goals in what happened to be off finishing nights for the star forward.

It seems as if Lloyd is finally settling into her role as a super substitute for the USWNT. After working hard to score on multiple occasions on Friday, she finally recorded her 101st and 102nd international goals on Tuesday. The second was through a stellar individual effort as she won the ball yards from goal and ran to shoot from a tight angle, marking an impressive night for the co-captain.

Playing a little less than half an hour on Tuesday, Rodriguez’s short shift saw her get on the end of a few opportunities. However, there was not enough time to see her make more of an impact.

Easily the standout player in both friendlies, Heath very easily slotted in for the injured Megan Rapinoe. She was able to show off a few of her well-known skills in the process, too. She recorded an assist on a free kick, was able to play smart passes for her teammates, demonstrated her finishing prowess, and added her usual flair. It is players like Heath who prove that the U.S. team’s attacking depth is so strong.