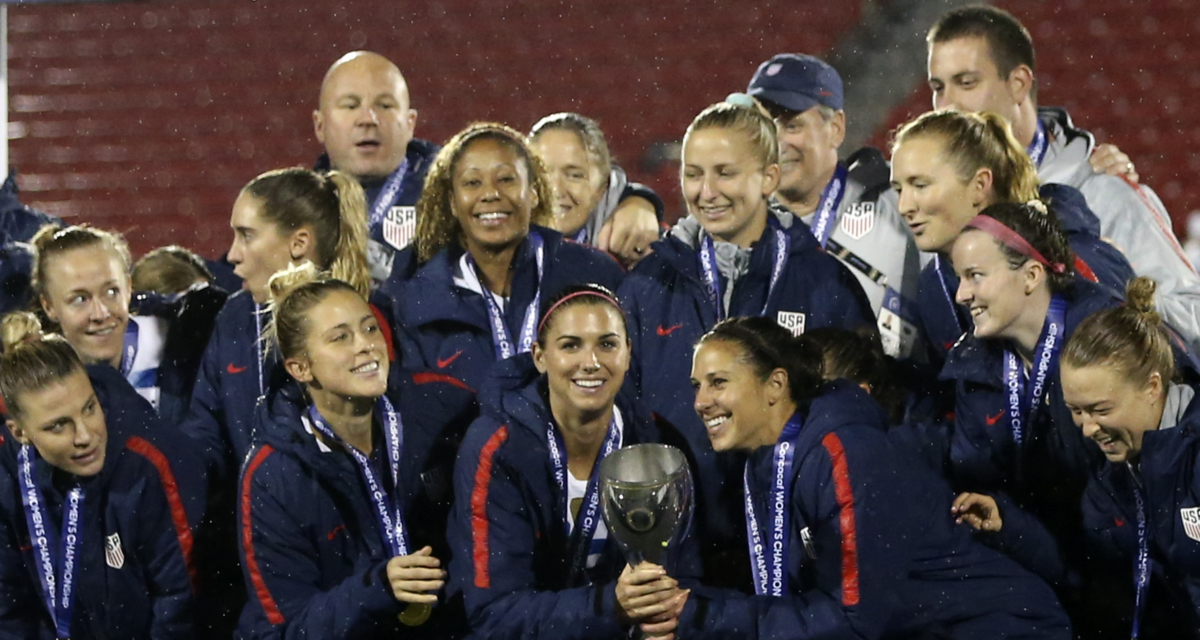 After a successful Concacaf Women’s Championship, the U.S. women’s national team has officially booked its ticket for next year’s World Cup in France, ensuring that Jill Ellis’s side will have the chance to defend its title.

With that task out of the way, Ellis and her staff will spend the next seven months carefully deciding which set of 23 players will be the best ones to successfully follow up the 2015 World Cup winning performance. With the Concacaf Women’s Championship, the head coach has a bit of a head start, as she had to not only commit to a tournament roster, but a starting lineup based on players available.

Most, if not all of the members of the 20 she picked for this month’s tournament will probably be in France next year barring injury; for the 2015 World Cup, the entirety of the 2014 World Cup qualifying roster made the trip to Canada, as Ellis elected to add Shannon Boxx, Lori Chalupny, and Alyssa Naeher.

Whether or not Ellis decides to do the same this time around, the race for the final few spots will be incredibly competitive, and may come down to form when rosters are due. That said, there is plenty of time for anyone on the bubble to emerge as a mainstay not just for the future, but for the present, as was the case for Julie Ertz ahead of the 2015 World Cup. Making the Concacaf Women’s Championship roster only after Crystal Dunn pulled out with an injury, Ertz quickly became the USWNT’s go-to starter at center back with Becky Sauerbrunn. Since, she’s become a staple at defensive midfield, with the potential to be a mainstay for years to come.

As the race for a roster spot in France officially begins, here is this month’s projection for the final 23:

(Changes from September are in bold; new additions are in bold italics.)

Outlook: Franch was left off the Concacaf Women’s Championship roster because the roster size for the regional tournament is smaller, but she is likely still the favorite to back up Naeher and Harris in France. Perhaps the most consistent American goalkeeper in the last year or two, it’s ultimately Franch’s spot to lose.

Outlook: Davidson missed this month’s tournament with an injury, and while the extent is unknown, there have not been any indications that the player will not recover in time for the World Cup. If she does, she’s likely not just to crack the roster, but the starting lineup next to Sauerbrunn. Mace went to the Concacaf Women’s Championship in her place, but is no certain bet to make the journey to France. However, the UCLA player may edge out her fellow competitors because Ellis has a certain amount of comfort with her in the squad, and because Mace herself is fairly versatile, frequently playing up top in college.

Outlook: Of the above group, only Zerboni missed the Concacaf Women’s Championship after picking up an elbow injury in the team’s last friendly against Chile. That said, she had begun to challenge for a starting spot, so should be able to recover from her injury in time, she will likely be on the roster. Another place to keep eyes on is attacking midfield, where Lavelle is seemingly locked in as the starter, but has no clear backup at the moment. It would not be surprising to see Horan take that responsibility, in addition to starting in between Ertz and Lavelle. The likes of Mewis, Zerboni, and Brian could easily back up Horan in that case.

Outlook: It seems as if Ellis is set here, having established her preferences in the front three and a back up for each member. It is possible that another forward ends up making her case as the World Cup approaches, but that would likely be in addition this six, not in place of anyone. Barring injury, it seems incredibly likely that these will be the forwards for the USWNT in France.

Any surprising inclusions or exclusions? Feel free to share below.