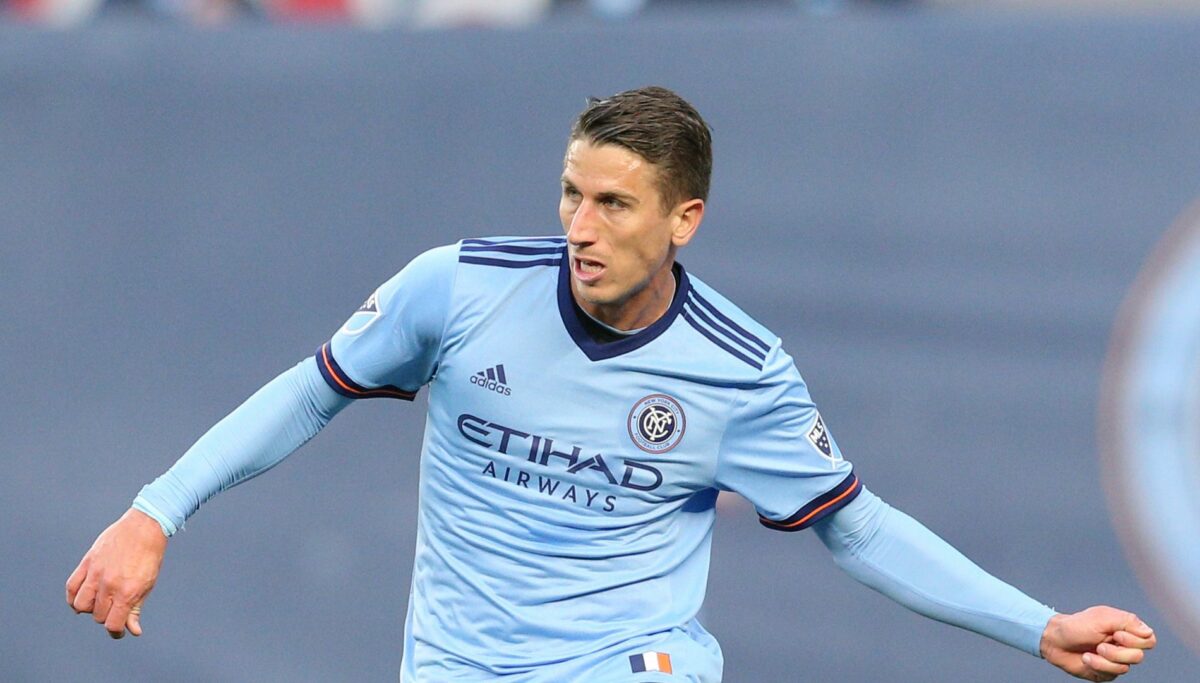 New York City FC defender Ben Sweat was the most unlikely player to earn a call-up to the USMNT during the program’s decision to rebuild through its youth.

Similarly, as unexpected as his first career call-up to the senior side was, so was how he found out about it.

“I found out from my trainer,” Sweat said on Monday, “Not even my agent because everybody was calling my trainer to make sure I was healthy and ready to go. It was funny to hear from my trainer first rather than my agent or the coach himself.”

Sweat, 27, was invited to national team camp years ago with the U-20’s, but never featured or appeared for the team. He is the oldest of three newcomers to national team camp, joining 20-year-old FC Dallas defender Reggie Cannon and 19-year-old winger Jonathan Amon of Danish side FC Nordsjaelland.

“There’s always opportunity,” Sweat said. “To me, age is just a number. Anyone can come in and contribute – we have a bunch of good young players coming in, the middle age and the experienced guys. So, everyone can contribute. Everyone is a talented player here and it should be a really good camp.”

Sweat’s journey from the Chargers Soccer Club of the U.S. Soccer Development Academy in Florida, to Columbus castaway, to NYCFC regular and now to the national team is one of patience, persistence and a lot of perseverance.

A native of Palm Harbor, Florida, he was the 14th overall pick by the Columbus Crew in 2014 after becoming the all-time appearances leader at the University of South Florida. What seemed like a smooth trip from college to Major League Soccer ended up taking the more rigorous, indirect route that didn’t come with immediate success.

Sweat never made an appearance for the Crew and was loaned to the then-USL Pro side Dayton Dutch Lions that May, where he made five starts. He was waived by Columbus in February 2015 and joined the then-NASL Tampa Bay Rowdies, spending two years back home before joining NYCFC on a preseason trial in 2017 under then-head coach Patrick Vieira.

He’s made 57 appearances for NYCFC since his arrival, becoming somewhat of a regular in NYCFC’s backline. He’s tallied one goal – a memorable header to the far post at Red Bull Arena in the Hudson Derby in 2017 – along with seven assists.

“I believe that everything happens for a reason,” he said on NYCFC.com. “I think I was meant to come to New York and I got the opportunity to play and be successful in my first year and now into my second season and now this.”

The USMNT’s first October friendly is Thursday against Colombia at Raymond James Stadium in Tampa, 20 minutes from Sweat’s hometown of Palm Harbor. Sweat’s international debut could come, literally, at home against Colombia.

His journey to the national team truly came full circle this week, with the national team’s training camp this week was held at his alma mater at USF on his old home pitch at Corbett Soccer Stadium for the first two days of camp before shifting over to Raymond James Stadium on Wednesday.

“It’s a special moment,” he added. “My first call-up and it happens to be in my hometown. It’s a special moment for myself, my wife, friends, and family. To be back at my old school, it’s a dream come true. I’m a bit emotional about it and I’m excited about the opportunity.”

The USMNT enters their upcoming friendlies against Colombia and Peru coming off a less-than-stellar showing last month, losing to Brazil 2-0 but bouncing back in a 1-0 win over a 10-man Mexico team.

Sweat isn’t guaranteed minutes or even a future with the USMNT after this pair of friendlies. Yet, that hasn’t put a dent in his excitement over his first USMNT call-up.

“I think when any player gets to that international level, it’s the highest level and it’s been a goal of mine for a while and I’m excited to be here,” he said. “If I play, I play. And if I don’t, I contribute as much as I can and enjoy the process.”