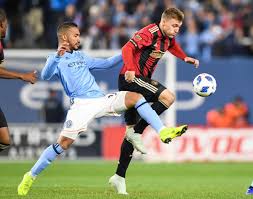 NEW YORK – It might not have been the sexy, flowing soccer that Atlanta has grown accustomed to, but it was effective and also quite possibly just what the doctor ordered.

Atlanta United took the first leg of its Eastern Conference Semifinals series by beating New York City FC on Sunday night, but the ingredients that made up the big road win differed greatly from those normally used by Gerardo ‘Tata’ Martino.

Normally a team that tries to dictate the tempo for 90 minutes by attacking relentless with its talented and dynamic front men, Atlanta United changed a bit of its DNA in the triumph at Yankee Stadium by taking a more pragmatic approach. Atlanta was the more aggressive team in the first half and found a reward via an Eric Remedi goal, but went into a shell and played defensively from there by dropping deep into its own half, staying organized as a team, and routinely hitting long balls forward to try and jumpstart counters or to simply clear the ball.

“The playoffs are played differently in every part of the world,” said Martino after the 1-0 win. “Just look at the Copa Libertadores and see if teams play the same there as compared to the first phase of the tournament or in their respective leagues. It’s clear that teams prioritize the ability to avoid errors because if you lose a league game in Week 9 and then you win in 10, 11, and 12 and nothing happens, you’re back up higher in the standings.

“But here when you make a mistake and commit an error, you end up eating nuts at home.”

Seeing Atlanta United alter its style from the free-flowing, attack-minded identity that has taken MLS by storm since last year surprised many observers, but Martino adopting for a more simplistic approach in order to avoid coughing the ball over while trying to build out of the back was due to a combination of him understanding the nature of the playoffs and what had happened to the club a week prior.

Atlanta United wasted a golden chance to claim the first piece of hardware in its history on Oct. 28, painfully getting routed, 4-1, by Toronto FC in the regular season finale to miss out on capturing the Supporters’ Shield. The lopsided defeat was littered with individual and collective mistakes, and having a repeat performance like that one week later at the start of the postseason, where errors are magnified and usually prove more costly, was the focus all week.

“We understand that in terms of the playoffs you play distinctly than you do in the regular season,” said centerback Leandor Gonzalez Pirez. “Normally during a game in the season, you keep taking chances and keep looking for another goal or a better result. Here, we had scored an important goal and gotten an important advantage. We could’ve maybe scored another goal in the first half or on the counter in the second, but we wasted the chances.

“Still, we knew we had to keep a clean sheet at the back because it was important to leave from here having not conceded. Thankfully, we were able to. We had to fight and scrap. We had to do that job today, and thankfully we were able to do it well.”

A key recipe in Atlanta United’s ability to successfully flip the switch and be more defensive-minded was the way the midfield managed to win second balls. Remedi, Darlington Nagbe, and Julian Gressel all showed more fight and grit, getting stuck in and playing with the type of steel that has largely evaded Atlanta in the majority of its matches against the other top-level clubs in MLS.

It was no coincidence, after all, that Atlanta United finished the choppy game with 21 fouls on the night. In fact, many of the players talked afterwards about playing with the type of “toughness” and “attitude” that they have lacked many times before. Like against Toronto one week prior.

“I think we just had to prepare mentally,” said midfielder Ezequiel Barco of the difference. “The last game we didn’t have attitude and toughness and they scored four on us. That couldn’t happen today, especially not in the instance we’re in. A loss is more costly in the playoffs as opposed to the regular season so we had to mentally prepare and demonstrated attitude.”

Atlanta United does not expect to have to be so defensive in the second leg at Mercedes Benz Stadium next Sunday. NYCFC needs at least one goal and will have to push, leaving space behind for the likes of Josef Martinez or Miguel Almiron to exploit.

That said, Atlanta is prepared to do what ever is necessary to advance to the next round of the postseason, even if it means having to once again get away from its usual style in order to play more defensively.

“Yeah I think so,” said centerback Michael Parkhurst when asked if the team needed to adopt this tactical wrinkle. “We want to stay true to who we are but at the same time winning is important. Winning is the most important thing right now. There’s no style points in the playoffs, there’s no performances that you can feel good about unless you win so you have to do what you have to do to win the game.”

Added Martino: “Today we weren’t so strict or rigid when it came to building out of the back and we used more long balls, but I think it’s justified because of the moment we are in and the importance of the game we had in front of us.”