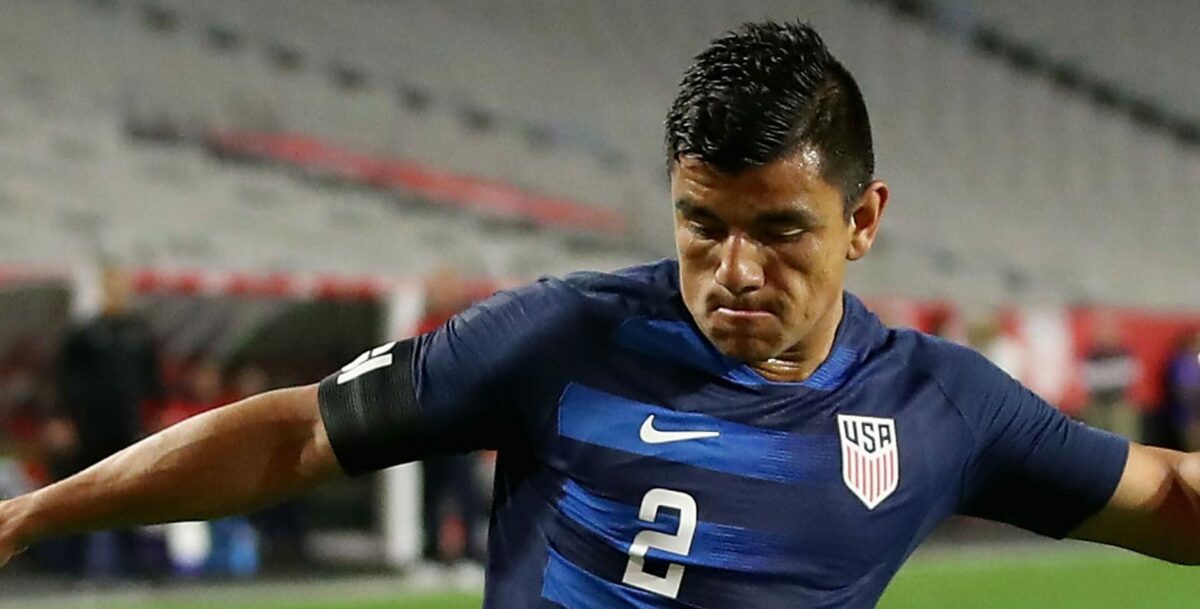 Saturday’s friendly against Costa Rica is not a World Cup match as he first dreamed as a kid, but San Jose Earthquakes defender Nick Lima is a step closer to reaching that goal.

Lima earned his first cap for the United States in Sunday’s 3-0 win over Panama and, despite making his debut for the national side, he’s approaching his time with the USMNT as if he’s been here numerous times before – like any other game.

“It’s another game day. You know, I try to treat them all the same,” he said after training on Wednesday. “I’ve been here a hundred times – well, maybe not that many – watching and playing. You just go out and we execute the game plan just the way we did the other day and pick it up another level.”

Lima enjoyed a happy homecoming back to the Bay Area after earning Man of the Match honors following his performance against Panama on Sunday where he played the full 90 minutes and tallied an assist on a “Wayne Rooney-esque” cross into the box that resulted in a headed goal by Walker Zimmerman in the 80th minute.

“I was ready to go and prepared and my mindset was dialed in,” Lima said. “I just saw him take a big touch and I know what I’m capable of defensively. So I took advantage of it.”

DOUBLE THAT 🇺🇸 LEAD! @thewalkerzim buries a header off a fantastic cross from @nick__lima! 2-0! 🔥 pic.twitter.com/ghAND2Ut3Y

Now the Quakes’ third-year Homegrown defender gets to showcase his stuff in his hometown on the national stage. Friends and family, along with some Quakes’ fans are expected to be in attendance to see the Castro Valley native wear the red, white and blue at home. Lima knows that it’s a big occasion, even if he isn’t making a big deal about it.

“I don’t take it lightly,” he explained. “It means the most to wear this crest and now you’re getting to wear it being home. I don’t really have the words for the meaning, but I could show it with action and the work that I’ll put in and be ready for the game.”

Lima spent time with the USMNT in last year’s January camp (then under interim head coach Dave Sarachan), but didn’t play in the two friendlies at the end. He’s already starting to make his mark with the national team at the right time at the beginning of Gregg Berhalter’s tenure while learning the new system.

“It’s a new system,” Lima explained. “Gregg wants to play a certain style and it takes more than what we have here in just under four weeks to get used to it. So, you know, it’s going to continue as the months and the years go with the national team.

“You just take it one day at a time, but you learn, you progress, you make mistakes, and you go through it, but when you’re here, you know from day one we hit the ground running and Gregg created a culture where we have to learn.”

With the Earthquakes, Lima overlaps the midfield to help push the attack. In Sunday’s win over Panama, he advanced more into the midfield to help support the attack. He created a chance in the opening minutes in this new role and also had a shot on goal saved. He played a big role on the USMNT’s opening goal by Djordje Mihailovic, sending a perfect pass to Corey Baird out wide to set him up for the assist.

“The second goal is a great example of his competing in transition and winning the ball and serving the ball in. So, we were really happy with him and I think it showed that he has a good understanding of the game.”

It’s a change of positioning from what he’s used to, but a role he’ll easily adapt to.

“If you’re not going to abide by the system and play along those like and adapt to it, you know, you’re not going to play,” he explained. “You want to be part of the team and you want to fit in and you wanna be able to help as well. I played the six so it was different, but I think there are moments in the game that allows me to be myself and what I’m used to doing.”

And he still knows it, even in his first appearances for country.

“Well it’s the first time I ever played with the national team,” he explained. “So you know it’s on the level of the whole country. And you know internationally as well.

“You wear the red, white, and blue so that’s the dream you think of as a little kid, the first one that kind of blossoms in your mind, and to be here it definitely holds a lot of weight.”