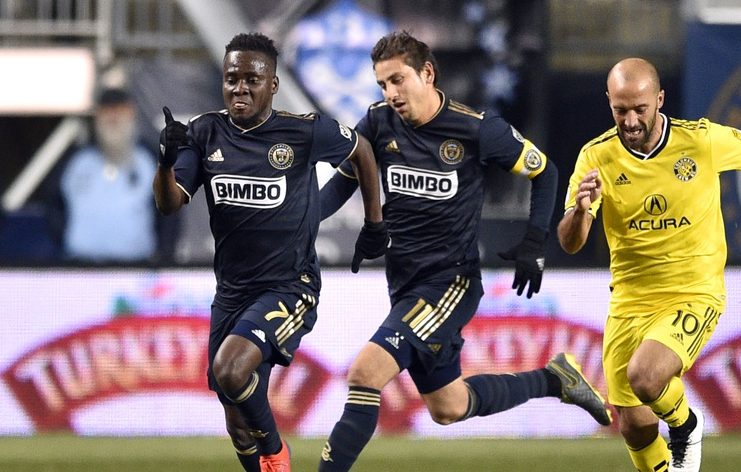 David Accam sparked the Philadelphia Union to a 3-0 home success over the Columbus Crew, scoring a brace at Talen Energy Stadium. The win was Philly’s first of the season which saw several starters miss out due to international duty and injuries.

Orlando City earned their first win as well on Saturday with Sacha Kljestan scoring the lone goal against the New York Red Bulls. Also, LAFC used a late winner from Walker Zimmerman to down Real Salt Lake while FC Dallas used a late goal from Ryan Hollingshead to defeat the Colorado Rapids.

A pair of Western Conference clubs kicked off the day’s action with the home team walking away with three points.

FC Dallas downed the visiting Colorado Rapids 2-1 at FC Dallas Stadium with Ryan Hollingshead getting the winner late in the second-half. The defender was in the right spot at the right time, pouncing on a rebound and beating Tim Howard.

Michael Barrios scored the opening goal in the 35th minute, beating Howard to the bottom-left corner for his second goal of the season.

Tommy Smyth equalized for the Rapids in the 69th minute, putting away a rebound after Kei Kamara rattled the post.

Hollingshead’s first goal since May 2018 proved to be the difference as FC Dallas moved to fourth in the West. Colorado are in ninth.

The New York Red Bulls were favored at home against Orlando City but it was a former Red Bulls standout who paid back his old club.

Sacha Kljestan’s 73rd minute finish proved to be the difference at Red Bull Arena as the Lions earned their first win of 2019. The midfielder got on the end of Joao Moutinho’s cross and beat Luis Robles to the bottom-right corner.

Alex Muyl and Omir Fernandez had the best offensive chances for New York but Brian Rowe made four saves in the clean sheet win.

Chris Armas’ side travel to Chicago next Saturday while Orlando hosts D.C. United a day later.

The Philadelphia Union limped into Saturday’s showdown with the Columbus Crew but ended it full of confidence after a dominant performance.

David Accam bagged his first two goals on 2019 and Ilsinho rifled in a third as the Union downed the Crew 3-0 at Talen Energy Stadium. Accam broke the deadlock in the 31st minute, squeezing an effort out of the reach of Joe Bendik and off the right post and in.

The Ghanian would double the hosts lead in the 42nd minute as he used some nifty footwork inside of the box. After shaking loose, Accam scored past Bendik inside the near post. Ilsinho would slam the door shut on any comeback attempt as he roofed an attempt into the top of the goal.

It was also the first MLS clean sheet for Carlos Miguel Coronel who stepped into goal for Andre Blake.

LAFC remained unbeaten to start the 2019 season with their star defender scoring the game-winning goal.

Walker Zimmerman’s long-range shot in the 92nd minute proved to be the difference as Bob Bradley’s side fought back from a one-goal deficit to win 2-1.

Both sides found the back of the net in the opening half with the hosts fighting back after RSL took an opening lead.

Damir Kreilach’s 35th minute penalty kick gave Mike Petke’s side an advantage at Banc of California Stadium. Sebastian Saucedo drew the foul from Latif Blessing which allowed the Croatian the opportunity to score his first goal of the season.

Diego Rossi answered in quick fashion for LAFC, slotting home his second goal of the season. The Uruguayan beat Nick Rimando to the bottom-left corner which drew the sides level heading into halftime.

Zimmerman beat Rimando to the top-right corner in stoppage time to make it 10 points from a possible 12 to begin the campaign.