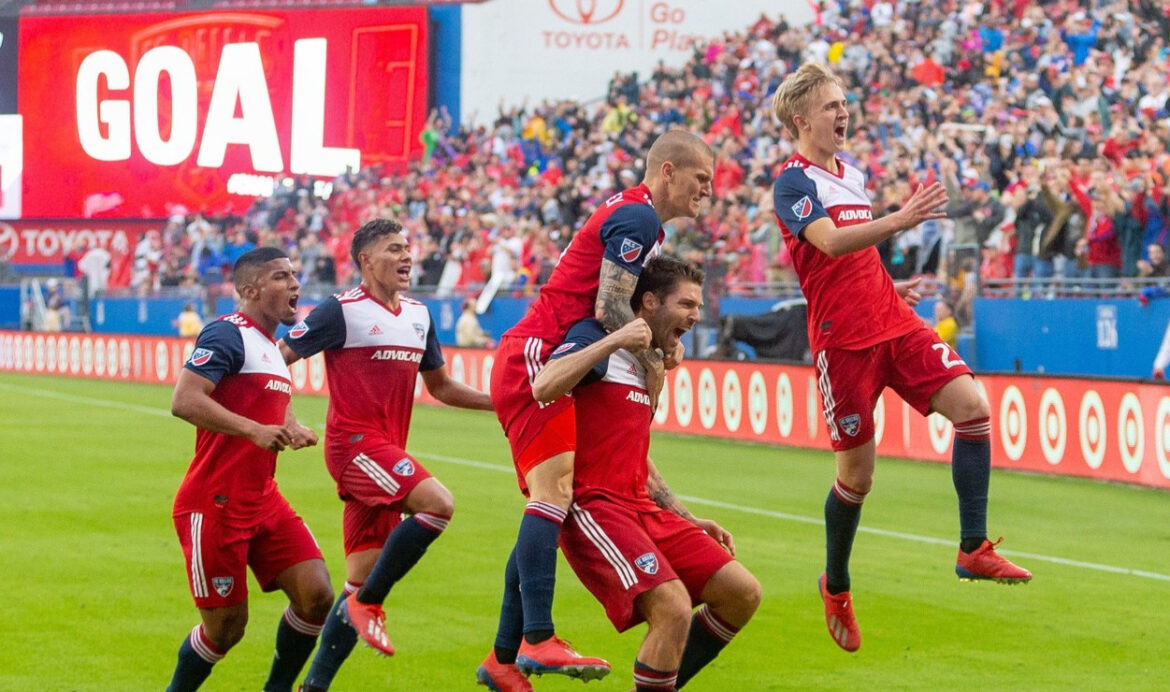 After a week of international matches, a full slate of Major League Soccer occurred on Saturday with plenty of teams returning to action.

The Philadelphia Union picked up their first road win of 2019 downing in-form FC Cincinnati at Nippert Stadium. David Accam and Marco Fabian each found the back of the net.

FC Dallas also looked impressive with a 4-2 win on the road at Real Salt Lake.

Tim Parker’s own goal off of a shot off Nemanja Nikolic shot in the 48th minute was the difference as the Chicago Fire handed the New York Red Bulls their second straight 1-0 loss on Saturday afternoon.

Marcelo sent a long ball into the Red Bulls 18-yard box for Przemyslaw Frankowski, the ball deflected back from Frankowski and Nikolic fired on the second-chance ball. Parker ran to the post try to clear the shot, but it deflected off of him and into the back of his net.

The Revolution’s aggressive approach paid off early on as they went ahead, 1-0, in in the 10th minute when Carles Gil sent in a beautiful ball in from the right sideline over 30 yards out. Center back Jalil Anibaba got low to head home at the far post past MNUFC keeper Vito Mannone.

The Loons leveled it up in the 26th minute after referee Allen Chapman went to VAR and awarded a penalty kick for a handball in the box by Revs captain Michael Mancienne. Minnesota’s Darwin Quintero buried it into the left side of goal for his third PK goal of the season to make it 1-1.
New England went back in front, 2-1, in the 62nd minute, as DeJuan Jones slotted Teal Bunbury into the box and he sent it across the face of goal to Brandon Bye to finish at the right post.

Sporting’s Johhny Russell opened the scoring for SKC in the 10th minute, firing a rocket past Evan Bush into the far post.

Krisztian Nemeth and Felipe Gutierrez added a pair of goals in the final minutes of the first half to extend Sporting KC’s lead to 3-0 at the break.

Carlos Vela opened the scoring for LAFC in the eighth minute, taking advantage of a missed clearance by Earthquakes goalkeeper Daniel Vega, literally walking the ball into the back of the net.

San Jose native Steven Beitashour doubled LAFC’s tally in the 26th minute, beating Shea Salinas on the left side of the backline and slotting his shot past Vega to the far post.

Vela added one more to end the first half, again torching San Jose’s backline to make it 3-0 for Los Angeles at the break.

Vela completed the hat trick on a perfect curler into the top corner from distance in the 66th minute, and Diego Rossi made it 5-0 just two minutes later.

The Columbus Crew bounced back in a big way on Saturday night, downing Atlanta United 2-0 at Mafpre Stadium.

Pedro Santos finish in the second minute started off things early for the Crew who aimed to rebound from last weekend’s loss in Philadelphia.

Gyasi Zardes’ return to league action payed off as well with the in-form striker doubling the lead in the 39th minute. Zardes now has three goals in four league appearances this season.

Federico Higuain missed a second-half penalty kick but it would do Columbus no harm as they held on for a 2-0 result.

The defending MLS Cup champs however are struggling to get back to their old ways, now sitting bottom of the Eastern Conference.

Jim Curtin’s side traveled to Nippert Stadium on Saturday night and made it two wins from two over the last two weeks.

David Accam was at the forefront again for the Union, who downed FC Cincinnati 2-0 in sloppy weather.

Accam would ice the road win in the 58th minute, beating Richey to the bottom-right corner for his third goal of the season.

Wilmer Cabrera’s side remained unbeaten to start the 2019 season with a 4-1 beatdown of the Colorado Rapids away from home.

Memo Rodriguez continued his strong run of form, beating Tim Howard in the fourth minute. Alberth Elis was credited with the assist.

Bad bounces would hurt the Rapids later in the half as own goals from Axel Sjoberg and Keegan Rosenberry extended Houston’s advantage to 3-0 heading into halftime.

Elis picked up his goal in the 67th minute, continuing the onslaught at Dick’s Sporting Goods Park. Kei Kamara scored a late consolation goal from the penalty spot for Colorado who would lose Tommy Smyth late due to a red card.

The Rapids remain winless while Houston sits in third place.

FC Dallas made it back-to-back wins under Luchi Gonzalez on Saturday, rolling to a 4-2 road win over Real Salt Lake.

The teams traded goals in the opening 31 minutes with Carlos Gruezo’s opener being canceled out by Jefferson Savarino. Damir Kreilach saw an early exit in between after seeing red for violent conduct.

Paxton Pomykal retained the lead for Dallas before halftime, shooting past Nick Rimando for his first MLS goal. The 19-year-old made it 3-1 after the hour mark before Marcelo Silva pulled a goal back for RSL.

That would be the closest the hosts comeback attempts came as Jesus Ferreira iced the win with his first league goal of 2019.

The first Cascadia Derby of 2019 saw the hosts the more happier of the two sides.

Both the Vancouver Whitecaps and Seattle Sounders shared the points on Saturday in a 0-0 draw at BC Place.

Maxime Crepeau and Stefan Frei each made three saves apiece to earn the clean sheets for their teams.

Despite having the better of the possession, Seattle struggled offensively and had to settle for their first dropped points of the campaign.