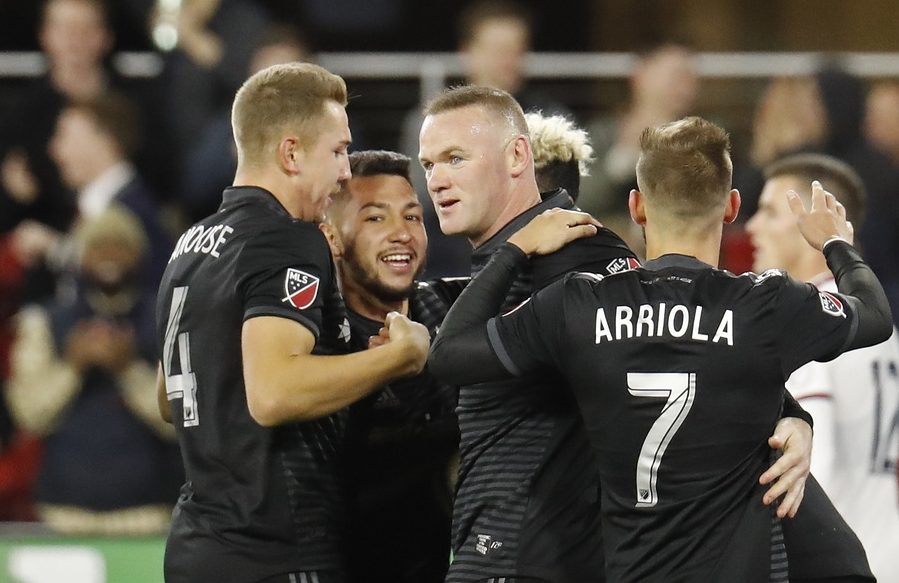 Week Three of the 2019 season kicked off on Saturday with several teams grabbing important victories. Others meanwhile were on the end of some lopsided defeats,

The Seattle Sounders continued their hot start to the season, kicking off the day’s action by defeating the Chicago Fire. The Columbus Crew continued their unbeaten run by edging FC Dallas, while the New York Red Bulls rallied from a first-half deficit to romp to a blowout win against the San Jose Earthquakes. The LA Galaxy defeated Minnesota United at Stubhub Center without Zlatan Ibrahimovic’s services.

The red-hot Sounders jumped out to a 3-0 lead on the road against the Fire before fending off a second-half surge on their way to a third-straight victory.

Jordan Morris scored a goal and set up another, while Raul Ruidiaz scored in his third straight match for the 3-0 Sounders.

Crew and USMNT goalkeeper Zack Steffen made two saves to record his second consecutive shutout, helping the Crew improve to 2-0-1. The loss dropped FC Dallas to 1-2.

Memo Rodriguez capped a stellar day, netting a winning goal in the 73rd minute to help the Dynamo post a 3-2 victory at BBVA Compass Stadium.

Rodriguez scored two goals on the day, both set up by Alberth Elis. It was Elis who forced a turnover and quickly fed the ball to Rodriguez in front of goal for a 15th-minute opener.

The teams traded penalty kick goals before Vancouver’s Lass equalized in the 54th minute. Rodriguez broke the deadlock in the 73rd minute by finishing off an excellent passing sequence with a tap-in of an Elis cross.

The victory improved Houston’s record to 2-0-1, while the defeat leaves the Whitecaps still searching for their first point of the season.

Red Bulls midfielder Alex Muyl came off the bench as a first-half injury replacement and wound up leaving the Earthquakes defense in pain, scoring two goals in a 3-1 Red Bulls comeback win at Red Bull Arena.

The Red Bulls took control in the second half, with Daniel Royer helping set up both of Muyl’s goals before Sean Davis delivered a perfect pass that Bradley Wright-Phillips converted. Royer scored his own goal just four minutes later, racing onto a Michael Murillo cross for the finish.

The win improved the Red Bulls to 1-0-1, while the loss dropped the Earthquakes to 0-3.

The Impact rattled a pair of early goals just a minute apart, taking control on the road on their way to a comfortable win at Orlando City Stadium.

Ignacio Piatti scored a pair of goals to help the Impact post their second win of the season. By the time Dom Dwyer notched his consolation goal in second-half stoppage time, the match was already decided.

Wayne Rooney sparked D.C. United to their second straight home win of the 2019 season with a hat trick in a 5-0 win over Real Salt Lake.

Rooney’s opening goal came in the 34th minute after Marcelo Silva was whistled for a penalty. The Englishman stepped up and beat Nick Rimando to the bottom-right corner.

The former Manchester United man extended his side’s lead seven minutes late with a beautiful chip past Rimando. RSL went into the break down a man as Jefferson Savarino was shown a straight red card for a dangerous tackle on Luciano Acosta.

Rooney capped off his perfect day in the 65th minute, finishing Junior Moreno’s assist into the center of the goal.

Lucas Rodriguez and Ulises Segura each added goals later in the half to ice the strong performance by the Black and Red.

D.C. jumps to top of the East while RSL is in sixth place out West.

The Los Angeles Galaxy rebounded from their first loss of the season by handing visiting Minnesota United a 3-1 loss at Stubhub Center.

The hosts took a two-goal advantage into halftime with Jonathan Dos Santos and Chris Pontius scoring five minutes apart. Dos Santos scored from the penalty spot while Pontius was able from close range following a lengthy series of passes by the Galaxy.

Jan Gregus’ first MLS goal came in the 75th minute for Minnesota, pulling the visitors within one of a point.

Sebastian Lletget re-extended the Galaxy’s lead in the 81st minute, before Angelo Rodriguez’s rebounded finish made the final minutes interesting. The hosts would hang on though to grab their second win of 2019.

The Loons are in fourth place after being handed their first loss while the Galaxy are in fifth.