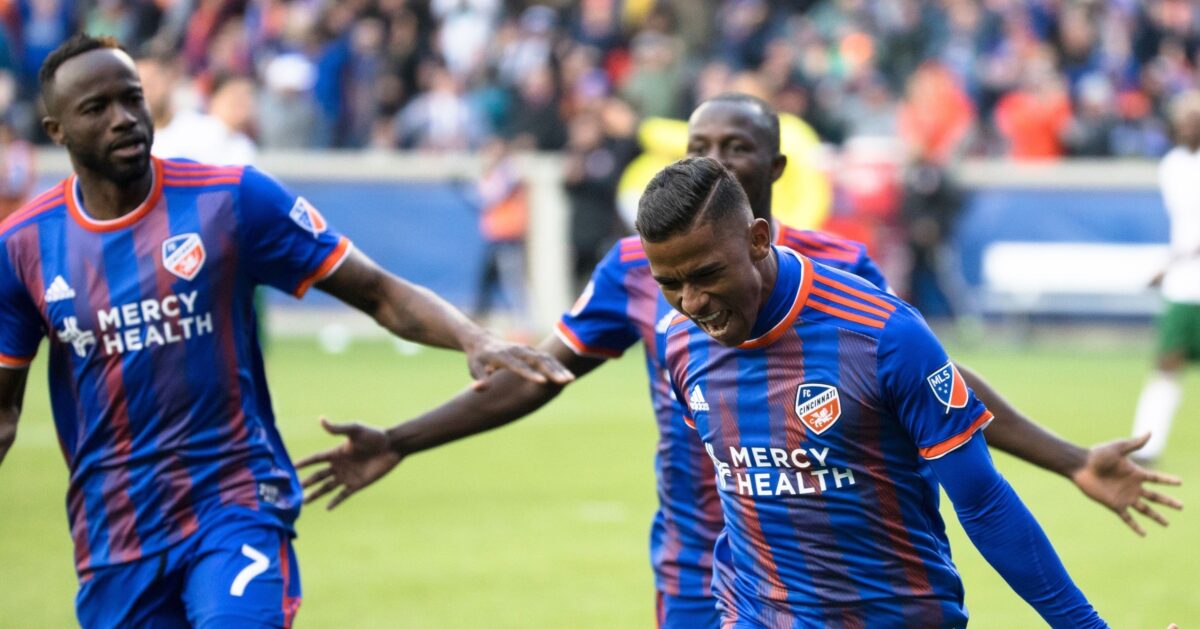 A busy Sunday of MLS action took place with 10 teams aiming to end the weekend on a high note.

FC Cincinnati earned the result of the day with a 3-0 home shutout over the Portland Timbers. Alan Koch’s side was dominant against the defending West champs and handed them their second consecutive loss.

Earlier in the day, LAFC was able to keep their winless streak alive with a 2-2 draw at NYCFC. Carlos Vela led the team with a brace.

18-year-old Brendan Aaronson netted his first MLS goal in his debut for the Philadelphia Union as Jim Curtin’s side tied Atlanta United 1-1.

Jozy Altidore returned to the pitch for Toronto FC and would score the game-winning goal in the Canadian club’s 3-2 win over New England. Colorado and Sporting KC shared the points in a 1-1 draw.

Carlos Vela was amongst the goals again as he scored a brace to give Bob Bradley’s team a point. Alexandru Mitrita opened his NYCFC account in the 39th minute, finishing off a deadly NYCFC fast break with a nicely placed effort into the top-right corner.

Vela would answer before halftime as he slid a left-footed shot past Sean Johnson into the bottom-left corner.

NYCFC regained the lead in the 62nd minute with Alexander Ring taking advantage of a corner. The Finnish midfielder got on the end of Ben Sweat’s pass following the corner and roofed a shot past Tyler Miller.

LAFC continued to press for a second equalizer and got it in the form of Vela again. The Mexican forward beat Johnson from the penalty spot after Sweat brought down Latif Blessing in the box.

NYCFC (0-3-0) is off until March 29th while LAFC returns to Banc of California Stadium on March 23rd against Real Salt Lake.

FC Cincinnati grabbed their first MLS win on Sunday and got to celebrate it with their home supporters.

Alan Koch’s men rolled to three points after a 3-0 triumph over the Portland Timbers.

Kendall Waston opened scoring in the 15th minute, doing what he does best. The  Costa Rican defender headed home from a corner kick to send Nippert Stadium into ecstasy.

Allan Cruz and Mathieu Deplagne put the match out of reach for the Timbers, scoring two minutes apart after the hour mark. Cruz scored on a rebound from point blank range while Deplagne finished Darren Mattocks’ assist.

Larrys Mabiala was sent off in the 70th minute after picking up a second yellow card.

FCC travels to New England next Sunday while Portland heads into an off week before facing the LA Galaxy.

Atlanta United had to come from behind to earn a point at Mercedes-Benz Stadium against the visiting Philadelphia Union.

Josef Martinez had the best effort of the first-half, rattling the crossbar from point blank range.

Aaronson’s deflected effort left Brad Guzan flatfooted which put Jim Curtin’s side ahead. The 18-year-old put in a lively performance in his MLS debut.

Barco came off the bench and was able to score his fifth career MLS goal to at least give the Five Stripes a point from the match.

The Union return to Talen Energy Stadium next weekend against Columbus while Atlanta head into an off week.

Toronto FC returned to play and made it two wins from two to begin the 2019 campaign.

Greg Vanney’s side used a second-half winner from Jozy Altidore to down the New England Revolution 3-2 at BMO Field.

Gil would double his tally early in the second-half forcing TFC to dig in if they wanted to keep their winning run alive.

Altidore kicked his season off with a bang,  placing Justin Morrow’s pass into the top-right corner. It would prove to be the winning goal as TFC have six points to begin the season.

TFC heads into another off week while New England returns to Gilette Stadium to host FC Cincinnati.

Diego Rubio found the back of the net against his former club, giving the Rapids a 1-0 advantage early in the second-half. A poor back pass to goalkeeper Tim Melia allowed the Chilean to pounce and slot into an empty goal.

However the would not last the remainder of the way as SKC battled back.

Johan Blomberg was sent off in the 87th minute which allowed Johnny Russell the opportunity to equalize a minute later. The Swede was shown a second yellow card after kicking the ball down the field after a foul was whistled.

Russell stepped up and curled a left-footed effort into the top-right corner to give Peter Vermes’ side a point on the road.