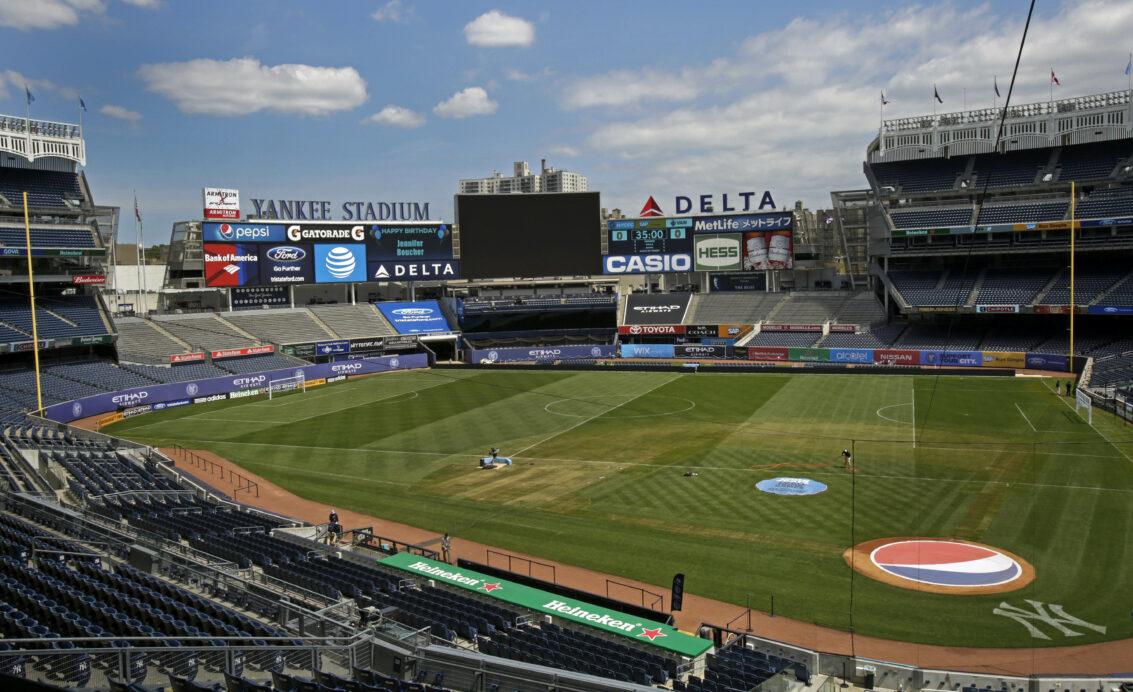 Bronx, N.Y. — Samuel Piette may have said it best: There were two fields at Yankee Stadium on Saturday.

The grass at New York City FC’s home games inside the baseball venue gets routinely criticized, but Saturday’s match vs. the Montreal Impact took things to another level in that regard. The field, particularly the parts in which the Yankees’ infield overlaps, was so dry that chunks of turf were flying up whenever players ran over it.

At halftime, the stadium’s grounds crew worked quickly on patching the holes with more grass and the problem did not seem to persist as much after the break. Still, the overall situation left both club coaches disappointed and one of them concerned over the safety of his players.

“To be honest, it’s dangerous,” said Impact manager Remi Garde after the scoreless draw. “It’s not the best place to play good football, but obviously it’s a worse place to play in terms of injuries. This is something that annoys me.”

One player did get hurt because of the poor field conditions. NYCFC captain Alexander Ring rolled his ankle during the first half when he stepped on a piece of grass that gave out. The midfielder pushed on and finished the match, but was spotted with a swollen ankle in the locker room afterwards.

“I can complain about the pitch, but it happens after 30 minutes and you play the whole game with a sore ankle,” Ring told reporters. “It’s not the best.”

NYCFC boss Domenec Torrent was much more diplomatic than Garde when asked about his degree of concern over injuries on the uneven field, saying in his post-game press conference “it is not the right time to talk about that.” Torrent, however, stated during a halftime interview on the broadcast that the field “was not in the best way to play soccer”.

The Spaniard elaborated on those comments after the final whistle, saying the field did not allow for quick soccer to be played.

“In the halftime, I said it was so, so dry and it’s not the best way to play because when I say to my players you have to play quickly, one (or) two touches, they told me sometimes it’s not possible because when you pass the ball it’s not good,” said Torrent. “It was like that, but I remember last year we play in the same pitch and we were able to win many, many games, but today especially was so, so dry.”

The field at Yankee Stadium has been notoriously difficult to play on since NYCFC’s inception because of its narrow dimensions and the baseball infield that has to be sodded over. Saturday, however, seemed to be the worst it has ever been.

How much that affected NYCFC and the Impact from finding the back of the net in their scoreless draw is unclear. After all, NYCFC is one of the worst scoring teams in all of MLS thus far this season (four goals in five games), while the Impact were missing star playmaker Ignacio Piatti (who has three of their seven goals in 2019) because of injury.

The field conditions certainly did not help, however.

“We played on two pitches today,” said Piette. “There was this part where it was really dry and when there was a tackle, the field would lift up right away. We actually need time to put it back at normal. It’s always difficult to play here. It was really dry, the pitch is really small.”

“You can’t really find your rhythm into the game,” Piette added. “Every ball you get, it’s a bit behind. You’re not really secure. You don’t know how the ball is going to react as well before it gets to you, so it’s pretty hard.”

“The physical integrity of the players should be the main concern for everyone in this league,” said Garde.