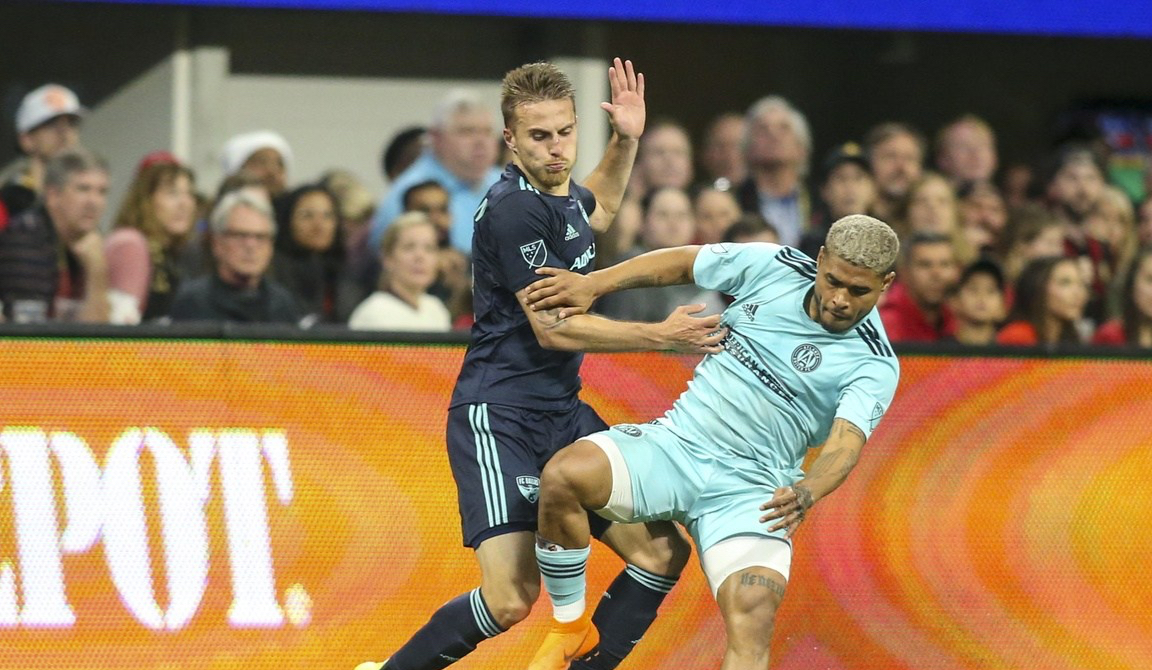 Matchday 8 in Major League Soccer resumes on Saturday with seven matches taking part throughout the day.

Atlanta United is still looking for a home win as they fell to FC Dallas at Mercedes-Benz Stadium. Their unproductive offense has only five goals through six games on their season after today’s failure.

Earlier in the day, the Philadelphia Union made easy work of the Montreal Impact, Orlando City got a late winner over the Vancouver Whitecaps, and the Chicago Fire blew through the Colorado Rapids.

In the evening set, The Timbers won the Battle of Caleb Porter over Columbus for their first win of the season and the New England Revolution grabbed a 1-0 home win over the New York red Bulls.

Still to come, the San Jose Earthquakes round out the night at home against Sporting Kansas City.

The Philadelphia Union were all over the Montreal Impact at Talen Energy Stadium. Three different goal scorers came through in the 3-0 home victory.

The first goal came in the 14th minute after the Impact lost possession and Cory Burke raced with the ball upfield and smashed a shot past Evan Bush into the bottom-left corner. It’s Burke’s second goal of the season.

Burke’s aggressiveness led to the Union’s second goal just before halftime as the forward was tugged down inside the box by Jukka Raitala. Referee Robert Sibiga blew for a penalty and Jamiro Monteiro slotted in his first MLS goal. Alejandro Bedoya’s rounded out the scoring with his second goal of the season in the 56th minute.

The Union did lose starting goalkeeper Andre Blake however to an apparent groin injury, which gave Matt Freese his MLS debut and Kai Wagner was sent off late for the Union after a dangerous tackle on Mathieu Choiniere.

The Union (4-3-1) are on the road next weekend for a date with Vancouver while Montreal (3-3-2) travels to New England on Wednesday.

An inter conference matchup at SeatGeek Stadium saw the host Chicago Fire down the Colorado Rapids 4-1.

Nemanja Nikolic’s header started things off in the 24th minute as Nico Gaitan crossed into the box to find the Hungarian forward. However, the Rapids pulled a goal back before halftime through Kei Kamara to make it 1-1.

C.J. Sapong boosted the Fire back in front in the 53rd minute, finishing from close range for his fourth goal of the season. Djordje Mihailovic extended the hosts advantage after the hour mark, scoring from close range as Gaitan picked up his second assist. Katai scored his second in the 80th minute with a beautiful right-footed strike from long range.

The Rapids were reduced to 10 men late as Jack Price saw a straight red card for a foul on Brandt Bronico.

Chicago (2-2-3) heads on the road to New York City FC in midweek while Colorado (0-6-2) will face Atlanta United on the road on Saturday.

Both sides had a couple half chances in the scoreless first half, but neither were able to make anything count. Orlando City owned the possession throughout the second half, but no goals came until they were able to capitalize in the 88th minute. Substitute Sacha Kljestan received a pass at the top of the penalty area and fired a shot that took a deflection of Techi Akindele, leaving Zac MacMath helpless in the Vancouver goal.

The Lions (3-3-2) will head to Yankee Stadium to take on New York City FC next Saturday while Vancouver (1-4-2) hosts the Philadelphia Union.

Atlanta United remains winless at home as their anemic offense continued to struggle in a 1-0 loss to FC Dallas.

Jesus Ferreira opened the scoring for FC Dallas in front of the hostile crowd only six minutes into the match. Ferreira took a feed from Michael Barrios on a counterattack with Atlanta’s defense out of sorts to set up the goal.

The Five Stripes were able to keep the FC Dallas attack at bay for the overwhelming majority of the game, but they couldn’t get anything to fall their way up front. They created chance after chance in the attacking third, but their finishing was truly lacking. Their best chances came from Ezequiel Barco, who hit the woodwork twice in the second half. Josef Martinez scored on a VAR awarded penalty at the death of the match, but it was too little, too late for Atlanta.

Dallas got their insurance goal on a well executed counterattack in the 84th minute. Barrios provided the picture perfect assist again as he was given a ton of room along the right flank. He picked out a streaking Bryan Acosta who one-timed the ball into the back of the next for his second goal of the season.

Next weekend, Atlanta United (1-3-2) will stay at home and take on the Colorado Rapids and FC Dallas (5-2-1) will return to Frisco to play the San Jose earthquakes.

After a weak first half, the New England Revolution grabbed all three points with a 1-0 win over the New York Red Bulls at home.

The Red Bulls had the better of the chances on the goalless first frame. They had three shots on goal to none for Revolution.

the Revs would bounce back in the second half to earn all three points, however. The lone goal of the game came in the 73rd minute courtesy of Cristian Penilla. Two minutes after coming on as a sub, he bagged his first goal of the season to get the Revs on the board. The speedy winger received a pass from Juan Caicedo and beat Luis Robles down the middle of the goal. That would be enough for the home side to secure the win.

Next up for New England (2-5-1) is a midweek clash with the Montreal Impact at Gillette Stadium. The Red Bulls (1-4-2), meanwhile, will lick their wounds and return home to host FC Cincinnati.

The Portland Timbers have one in the win column after going on the road and downing the Columbus crew at Mapfre Stadium.

Larrys Mabiala gave the Timbers their first lead since the opening night blizzard in Colorado by powering a header off a Diego Valeri free kick in the 31st minute. They doubled that lead just four minutes later through Jeremy Ebobisse, who was left open for an easy finish from the top of the six yard box.

The Crew took advantage of some sloppy play by Jeff Attinella to get on the board in the 69th minute. The Portland keeper was caught off his line and Pedro Santos floated a shot over his head and into the goal from long range to cut into the deficit. that goal wouldn’t be enough for the Crew. The Timbers capped off their first win of the season with a goal for Jorge Moreira in the 92nd minute.

The Timbers (1-5-1) will continue their lengthy road trip in Toronto next Saturday night while the Crew (4-3-1) host D.C. United on Wednesday night.

Miguel Almeyda earned his first win with the club two weeks ago but saw his side lose their fifth of the season in Houston last Saturday. San Jose have struggled against dynamic attacks this season and will need to hold their own if they want any points at home.

SKC fought back for a 2-2 draw against the Red Bulls with Gianluca Busio scoring in a third consecutive match. Johnny Russell also found the back of the net, but the team could only draw for the second match in a row.

SKC have won four of their last five meetings against the Quakes.