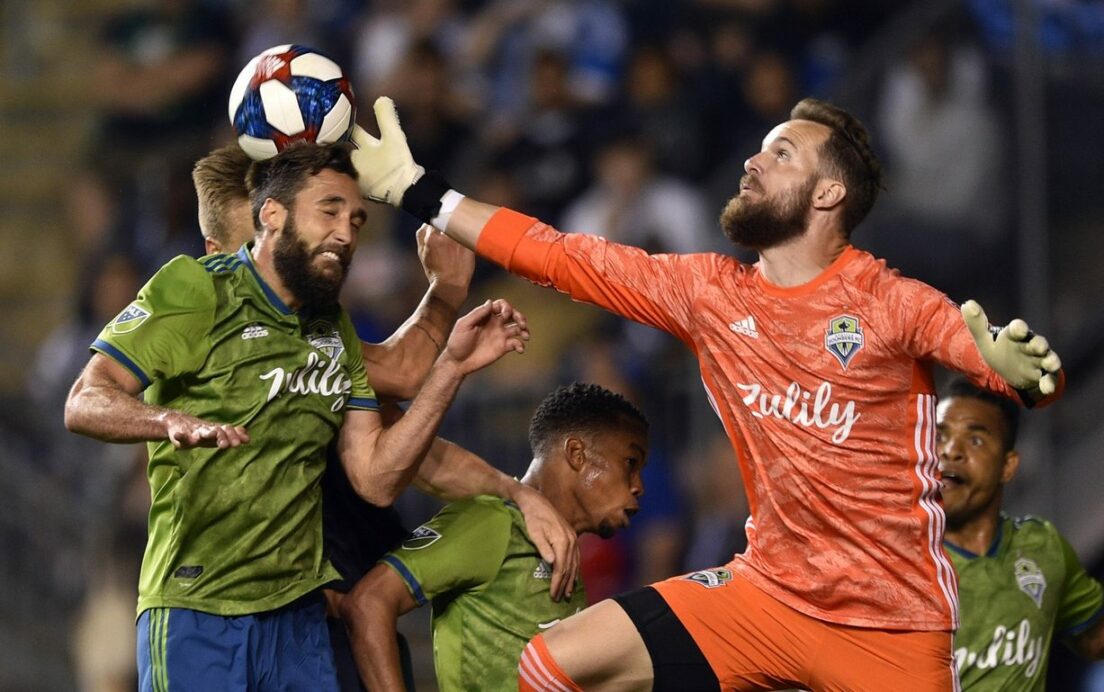 CHESTER, Pa. — The Seattle Sounders knew what they were walking into on Saturday night at Talen Energy Stadium.

Down several starters due to injuries, in their third match in eight days, the Sounders were facing a Philadelphia Union side with the best home record in the Eastern Conference.

Brian Schmetzer’s team defended hard for 90+ minutes, frustrated the Union, and walked away with a point. It was a rewarding point for the Western Conference club, who were out-possessed, outshot, and outran by their opponents.

“Statistically if you look at this piece of paper, it wasn’t a good game for us,” Schmetzer said. “Credit to Jim and the Union, they controlled a lot of the game. When I look at my players’ faces at the end of the match, after they gave their all, and even having a chance at the end of the game to win, I can’t ask anything more from my guys.

“We flew here on two days rest and for them to put on a performance like that, it was monstrous. I don’t think there is any team in the league that isn’t going to take seven points out of nine in eight days.

“I don’t care what the stat sheet says, we’re pleased with the final result.”

The Sounders were pinned back most of the match, something they aren’t really used to. They were held to one shot on goal, 223 passes (more than 300 less than the Union), and had two players earning their first starts of the season: Jonathan Campbell and Alex Roldan.

Stefan Frei, one of MLS’ top goalkeepers, made six saves to earn his fifth clean sheet of 2019. Frei denied Brenden Aaronson in the first half, while also keeping Kacper Przybylko and Haris Medunjanin out on strong efforts. He was the man of the match for the Sounders who earned their first point at Philadelphia since 2013.

“Alex [Roldan] and Jonathan [Campbell] did great, Schmetzer said. “They did exactly what I needed them to do tonight. They weren’t flashy, they had a couple missed balls, but they did extremely well and exactly what we wanted out of them.

“Stef put in a performance that we know he can do at any moment of the season. We earned seven points in a week which I’m sure a lot of teams will take, plus we did it with tired guys and some new guys coming in. Games like tonight, when you walk out with a point after a strong defensive performance, feels like a win.”

The Sounders lacked an offensive threat with Philadelphia’s dynamic attack pinning them back. Cristian Roldan and Nicolas Lodeiro dropped deep to defend while Will Bruin was a non-factor up top. Campbell’s introduction into the starting XI gave the Sounders a third centerback which put another body in front of Frei to defend.

It wasn’t a normal formation for the Sounders, but it got the job done and kept the Union off the scoreboard.

“I thought we put a lot of energy into this game and we had to battle,” Frei said. “All things considered, changing tactics we tried to play out of the back but it didn’t work at times. It was a grind for us tonight and for us to earn a point is a good result. It’s the first match of a lengthy road trip and it was a good commitment by the guys tonight and that’s what I like to see.”

For the Sounders, they’re unbeaten in six matches, which has them in second place, three points clear of the Houston Dynamo.

A week off before a trip to Sporting Kansas City should do the team good especially with Jordan Morris, Chad Marshall, and Gustav Svensson recovering from respective injuries.

With only six points though on the road in 2019, the team will aim to add to that total with trips to SKC, Dallas, and Montreal coming up between May 26th-June 5th.

“We took care of business at home, that’s good it is what we expect out of ourselves,” Frei said. “This game was a good opportunity to set what we wanted to achieve on the road during this trip. Not only what we want but what we can achieve as a group.

“We have to keep putting things in the bank, whether it’s one point or three.”