Who Should the USMNT Start vs. Panama?

The U.S. Men’s National Team may have clinched a berth in the knockout stage of the 2019 Concacaf Gold Cup, but that doesn’t mean the Americans will take the foot off the gas.

Gregg Berhalter’s side is coming off a 6-0 thumping of Trinidad & Tobago on Saturday night and now turn its sights towards Panama. A win or tie against Panama will clinch the top spot of Group D for the USMNT, and set them up with a date against the runners-up in Group C in the quarterfinals.

Christian Pulisic, Paul Arriola, and Gyasi Zardes all shined on Saturday night and will be eager to get after a Panamanian side who have been tough to break down.

Panama have claimed wins in their opening two matches as well, recently defeating Guyana 4-2. Abdiel Arroyo, Erick Davis, and Gabriel Torres all scored in the triumph in Cleveland and will also be excited to go after the top spot in Group D

Here’s a closer look at one USMNT lineup Berhalter could go with Wednesday night: 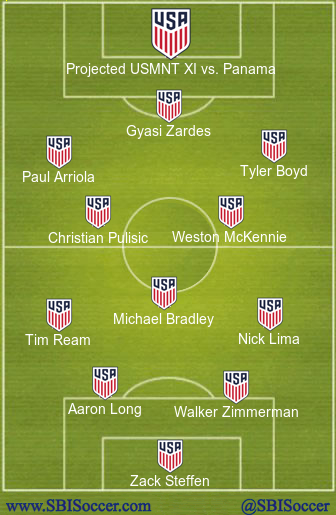 Rotation would be expected if the USMNT already had the group locked up, but expect Berhalter to keep going with these 11 guys for this match.

Zack Steffen was rarely troubled against Trinidad, but could find a tougher time against Panama on Wednesday. Physical play from Panama’s attackers will give the USMNT backline its toughest test of the tournament so far.

The backline will stay the same for the USMNT as Nick Lima and Tim Ream continue out wide. Edgar Barcenas and Alberto Quintero are the likely options to start on the wings for Panama after starting the first two group stage matches.

Ream and Lima will be asked to do a lot of running against this offensive attack, but could be given help from the centerbacks and wingers tracking back.

Walker Zimmerman and Aaron Long have improved as the tournament has gone on and will need to continue that trend for starting minutes. Panama has rotated its strikers in both matches so it will be intriguing to see who starts. Gabriel Torres and Abdiel Arroyo are the likely duo as both have goals from the last match.

Michael Bradley will continue in the No. 6 position and try to shut down the likes of Armando Cooper (one assist). Bradley did better in Matchday 2 and could see Weston McKennie drop back and help if Panama gets more possession through the match.

Christian Pulisic is coming off his best game in the Gregg Berhalter-era and will try to replicate his performance against Panama. His dribbling and playmaking opportunities will become more important throughout the tournament. McKennie will work next to Pulisic and also try to battle against the gritty and physical midfield of Panama.

Paul Arriola and Tyler Boyd will start on the wings once again and try to create chances in the final third. Boyd did not register a point in the lopsided win, but still has the ability to take defenders on inside of the box. Arriola continued his strong tournament and could’ve had even more against Trinidad that did not go in.

Gyasi Zardes scored a brace and will get to retain his spot up top. His quality in the final third was good and Berhalter should continue with the hot hand, even though Jozy Altidore did get some minutes against Trinidad.

Altidore, Jordan Morris, and Cristian Roldan are three players that Berhalter can call on off the bench if the USMNT needs a goal. Reggie Cannon came off the bench and Trinidad and could see more time to close out matches, as could Wil Trapp.

Wednesday’s contest will be a tough one for the USMNT, but should they win then Berhalter’s record will stay perfect in the Gold Cup heading into the quarterfinals where either Jamaica, Curacao, or El Salvador will be waiting.

What do you think of the idea of Berhalter sticking with the same lineup? What changes would you make?