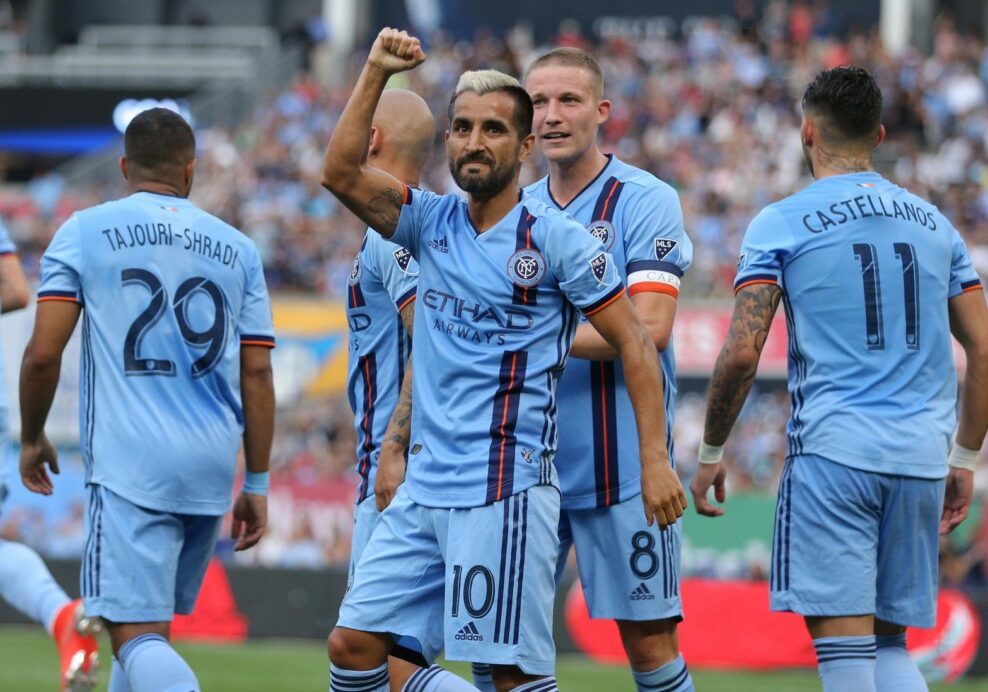 Fourth of July celebrations will start early for 14 MLS teams on Wednesday before six additional sides battle for table positioning in weekday action.

NYCFC is coming off a strong win over the Philadelphia Union and will try to next take down the Seattle Sounders. Both teams are fresh off three points and will battle in the Bronx ahead of a busy weekend of league play as well. Stefan Frei will try to keep out the likes of Maxi Moralez, Valentin Castellanos, and others.

Elsewhere, LAFC will try to rebound away from home against Sporting KC while the Philadelphia Union also hit the round to face Orlando City in the first of a home-and-home. Real Salt Lake hosts the Columbus Crew in the final match of the evening on Wednesday. The L.A. Galaxy takes on Toronto FC at Dignity Health Sports Park on Thursday.

Two sides currently in the top-six of their respective standings will kick off Wednesday’s action.

Yankee Stadium will be the venue for NYCFC’s visit of the Seattle Sounders. Domenec Torrent’s side are riding a 13-match unbeaten streak in all competitions, including a four-match winning run. A 4-2 win over the Philadelphia Union saw Maxi Moralez and Valentin Castellanos as the heroes, as they combined for all four goals.

Moralez is in great form for NYCFC, registering a point in six-consecutive appearances. The 32-year-old is showing zero signs of slowing down for the Eastern Conference club.

The Sounders snapped a lengthy five-match winless run at home last weekend but will have a tough test on Wednesday. With several starters still missing due to international competitions, the goal will be to defend confidently against NYCFC’s dynamic attack.

Stefan Frei will be busy in the Bronx and may need a heroic performance to help his side to a point.

A pair of Western Conference sides expected to be up near the top of the table meet at Children’s Mercy Park with only one meeting such expectations so far.

LAFC leads the West but are coming to Kansas City off the back of a shutout loss to the Colorado Rapids. Carlos Vela was ineffective last Friday night and will need a bounce back against a SKC needing points. Lee Nguyen was one of the lone bright spots at Dick’s Sporting Goods Park and will be asked to do a lot in midfield with Mark-Anthony Kaye and Eduard Atuesta missing.

Peter Vermes’ side have only tasted victory three times this season in league play and need to start being aggressive. A lack of starters hasn’t helped their cause, but there is talent on this team who need to step up. Krisztian Nemeth and Daniel Salloi will headline the attack, but Seth Sinovic and Nico Hasler will be tested by Diego Rossi and Vela.

The Eastern Conference-leading Philadelphia Union begin a home-and-home with Orlando City on Wednesday in Florida.

Jim Curtin’s side fell to NYCFC last weekend and never truly responded after giving up the lead at Yankee Stadium. Kacper Przybylko scored which is a positive sign, while Jamiro Monteiro continues to be a threat in midfield. Haris Medunjanin and Kai Wagner were poor and will be expected to bounce back in a winnable contest.

Orlando City has won four of five in all competitions, including league wins over Montreal and Columbus. Nani has recorded a point in three of his last five appearances, while Chris Mueller has also chipped in two of those fixtures. This duo will be expected to carry the load against the Union and the Lions will also need to be wary of Monteiro wherever he is on the pitch.

The series is 2-2-1 in the last five meetings between these sides.

Here’s a full schedule of this week’s action: