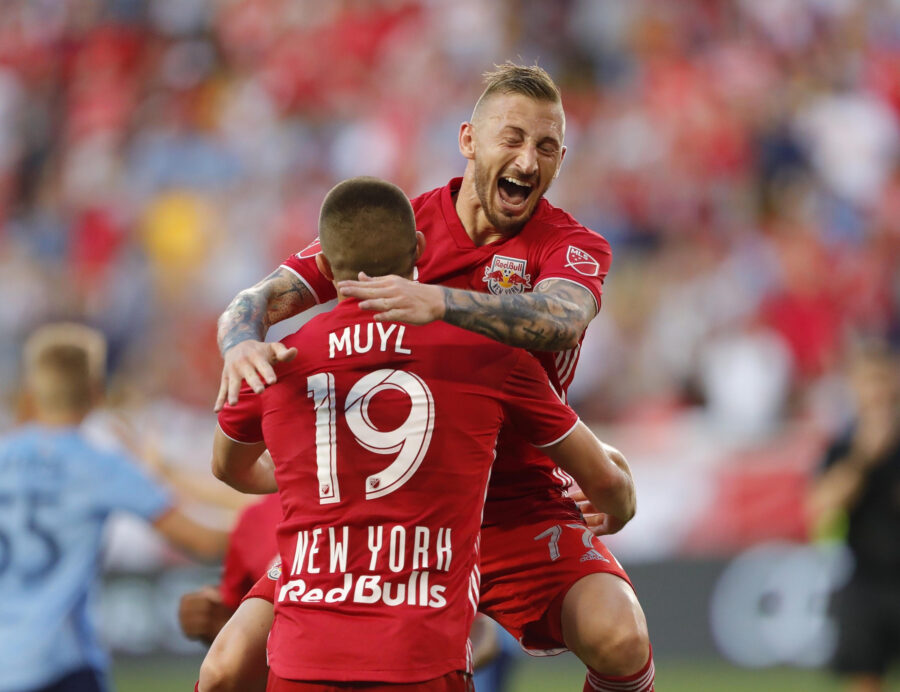 HARRISON, N.J. — For the New York Red Bulls, it was a heads-up play. For New York City FC, it was a tremendous officiating blunder.

No matter the label, it proved decisive.

The Red Bulls got the best of their crosstown rival in a 2-1 affair on Sunday evening, but the winning goal in the latest edition of the Hudson River Derby came with its share of controversy. Linesman Corey Rockwell used his flag to indicate a corner kick on the 60th-minute play, but head referee Alan Kelly overruled the decision by saying it was a throw-in.

NYCFC’s defense was caught off guard by that decision and ended up conceding a snap header to Daniel Royer, but the goal would not have happened had it not been for Alex Muyl’s alert decision to take the throw quickly.

“Marc (Rzatkowski) tried to play me and Callens hit it out so I’m facing the sideline and he hits it out of bounds. I see it’s a throw-in,” Muyl told SBI. “I had no idea the sideline ref called for a corner. I guess that’s what happened. I had no idea.

Muyl may have instantly recognized that the play was a throw-in, but he did not understand during the game what happened in the immediate aftermath of Royer’s finish. The 23-year-old midfielder saw NYCFC’s players arguing with Kelly for an extended period, and it was not until after the match that he understood what they were discussing.

“At that point, this whole time I didn’t know they called for a corner so I didn’t know what they were arguing about,” said Muyl. “When they had a conversation for 10 minutes, I’m like, ‘Yo, what is this? This is a joke. You can’t be doing this.’

“I see now, okay, I understand the reaction from them, but at the time I started to get upset that you’re letting them talk to you like this for so long after the play.”

While Muyl was not credited with an assist on the game’s decisive play, the goal was born from his decision to throw the ball in bounds quickly. That was not his only major contribution, though, as he hit a long ball in the first half that resulted in a penalty kick that Royer converted for the game’s equalizer.

“I look up and saw there’s space and I see that Brian (White) is between the two defenders,” said Muyl. “I don’t know if you saw Philly, I played the same kind of ball. It just curled around the back.

“It was a really good ball, no lie,” Muyl added with a chuckle.