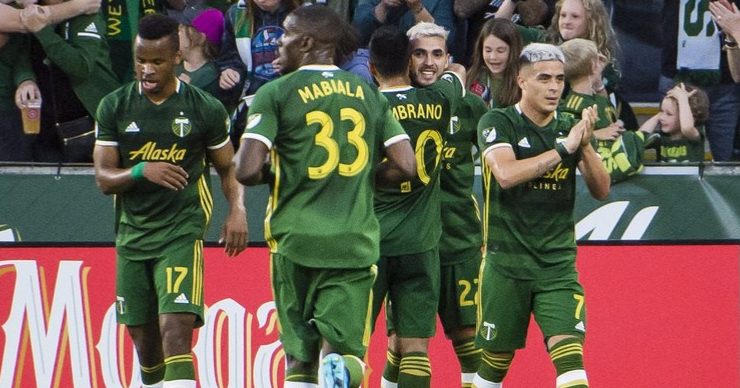 The late match saw the Portland Timbers down the L.A. Galaxy 4-0 at Providence Park. Cristhian Paredes led the way with a brace while also saw three players sent off.

Bruce Arena’s New England Revolution extended their unbeaten streak to 11 matches with a 4-1 beatdown of Orlando City at home.

It was smooth sailing for the hosts who never really faced much of a challenge. Gustavo Bou opened things after three minutes for the Revs which was the lone goal in the first 45 minutes.

Cristian Penilla finished Brandon Bye’s assist two minutes into the second-half to make it 2-0 before Carles Gil added a penalty kick goal in the 60th minute.

Gil set up Diego Fagundez for the Revs’ fourth goal on the night. Tesho Akindele pulled a consolation goal back for the Lions, but it was the lone bright spot for the visitors.

Caleb Porter’s Crew made it back-to-back league wins with an important 3-2 road success over the New York Red Bulls.

The sides were level at halftime after Luis Argudo cancelled out Brian White’s 15th minute opener. White’s header beat Eloy Room but Argudo finished from a tight angle to level it up.

Pedro Santos roofed a shot in the 46th minute to swing the match in the Crew’s favor, but Daniel Royer’s penalty kick leveled it back up after the hour mark.

Santos played the hero late for the Crew, scoring his second goal of the night to stun the Red Bulls faithful.

The points were shared in Dallas in what was a scoreless draw between FC Dallas and Real Salt Lake.

RSL had the better of the offensive chances despite head coach Mike Petke being suspended for the match.

Sebastian Saucedo and Jefferson Savarino had the better of the first-half chances for RSL while Bryan Acosta was forced out by Nick Rimando before halftime.

Corey Baird forced Jesse Gonzalez into his fifth and final save of the night in which the USMNT keeper was man of the match.

The Seattle Sounders bounced back from a derby loss to Portland last weekend with a 1-0 road success over slumping Houston.

The USMNT striker scored with a low drive past Joe Willis to give Seattle a second-half lead they wouldn’t relinquish.

Stefan Frei made three saves to preserve the clean sheet, with none being bigger than him denying Mauro Manotas in the final minutes.

Outshooting the Loons five-to-one in shots on goal, the Whitecaps won’t be complaining too much with leaving Allianz Field with a point.

Vito Mannone made three of his five saves after halftime, denying Yordy Reyna and Fredy Montero.

Ike Opara hit the crossbar late for the Loons before Darwin Quintero was kept out in what was Minnesota’s only shot on goal.

It was a massive bounce back for Remi Garde’s Impact who thrashed the Philadelphia Union 4-0 at Stade Saputo.

Recent acquisition Lassi Lappalainen scored a brace while Orji Okwonkwo also found the back of the net twice on the night.

Lappalainen’s opening MLS goal came four minutes in as the Union did not defend well from the get go. Ignacio Piatti set up Okwonkwo for his first of the night in the 36th minute to double the Impact’s lead before halftime.

Lappalainen capped off a fast break in the 46th minute to make it 3-0 before the Nigerian Okwonkwo capped the final score at 4-0.

It was a pitiful 90 minutes for Jim Curtin’s side who now travel to D.C. United next weekend.

It was a sluggish affair at SeatGeek Stadium as the Chicago Fire and D.C. United played out a scoreless draw.

Wayne Rooney had the Black and Red’s best chance in the second-half being denied by Kenneth Kronholm.

Przemyslaw Frankowski forced Hamid into a late save which kept the score at zeros on the night.

Greg Vanney’s Toronto FC ran out to a two-goal lead against FC Cincinnati and never looked back in what ended up being a home win.

Nick DeLeon’s opener came 16 minutes in for TFC before the midfielder set up Jozy Altidore for a nice finish five minutes into the second-half.

Emmanuel Ledesma pulled a goal back for the visitors six minutes later but it wouldn’t be enough for FC Cincy.

TFC are in eighth while Cincinnati remains bottom.

It was another three points for Matias Almeyda’s San Jose Earthquakes as they rolled past the Colorado Rapids 3-1 at home.

Lalas Abubakar’s own goal kicked things off after two minutes for the home team. Valeri Qazaishvili continued his fine form in the 34th minute with another goal to his name in recent weeks.

Holding a two-goal lead, the Quakes put the match out of reach as Shea Salinas iced the result in the 83rd minute with a fine finish.

Diego Rubio’s consolation goal was all Conor Casey could be happy about for Colorado.

It was a two-point night apiece for Cristhian Paredes and Jorge Villafana as the Portland Timbers routed the L.A. Galaxy 4-0 at Providence Park.

Paredes’ opener and Diego Valeri’s finish came four minutes apart before halftime to give the hosts a comfortable halftime lead.

Efrain Alvarez was showed a red card for violent conduct not long after Paredes scored his second of the night which showed the Galaxy’s frustration.

Ebobisse added a goal late before both Diego Polenta and Dairon Asprilla were sent off after a confrontation.

It was a huge week for Portland after they downed rivals Seattle last weekend as well.