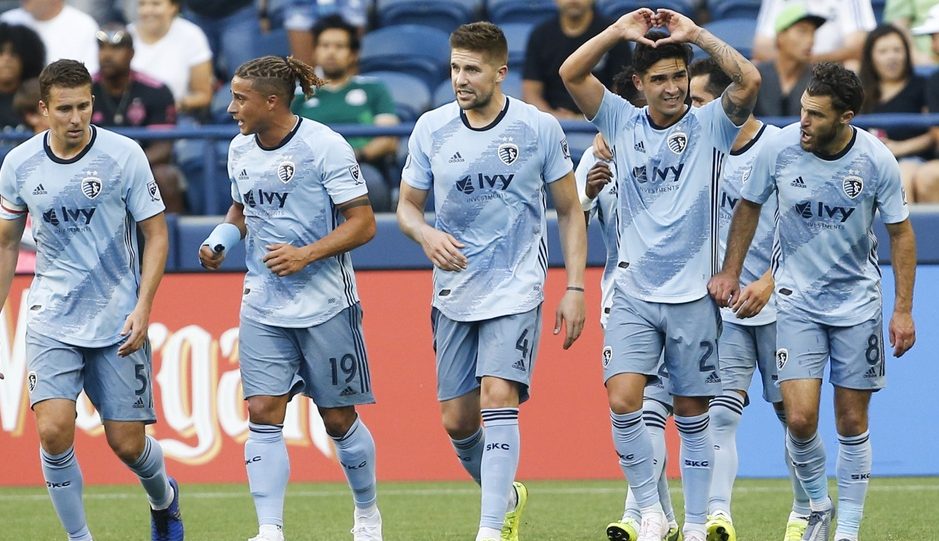 A trio of MLS matches were on tap on Sunday as the weekend’s action came to a close.

Not much has gone right for Sporting KC this season, but Peter Vermes’ side may have started a turnaround at just the right time of the season. Sporting KC downed the Seattle Sounders 3-2 on Sunday night at CenturyLink Field to close the weekend’s action.

Opening the day’s action was Minnesota United’s home date with the Portland Timbers. The Loons used a 92nd minute penalty kick from Ethan Finlay to down the visiting Timbers. The win propelled the Loons to second in the Western Conference.

Elsewhere, the Philadelphia Union steamrolled D.C. United at Audi Field in the first of two meetings with the Black and Red this month.

Minnesota United extended its current unbeaten run to 11 matches in all competitions after a 1-0 success at Allianz Field against the Portland Timbers.

Ethan Finlay’s 92nd minute penalty kick proved to be enough for Adrian Heath’s side to jump up to second place in the West.

Vito Mannone was the busier of the two goalkeepers in the opening half, making four saves. The Italian kept out Sebastian Blanco’s good effort in the opening 20 minutes, before repelling Brian Fernandez’s chance as well.

Jan Gregus was denied a goal in the top left corner for the Loons, before Fernandez rattled the post for Portland.

Larrys Mabiala was whistled for hand ball in the 87th minute and despite video review being used, the play ruled in favor of the Loons.

Finlay stepped up and scored to hand the Loons another huge three points in their quest for postseason action.

Portland sit in eighth place after the loss paired with other results in the West this weekend.

WASHINGTON — The Philadelphia Union put in their best performance of the 2019 MLS season to return to the top of the Eastern Conference table.

Marco Fabian scored a brace, while Alejandro Bedoya and Kacper Przybylko each netted goals to propel Jim Curtin’s side past 10-men D.C. United 4-1 at Audi Field. It was the Union’s third consecutive league road win over the Black and Red.

Bedoya broke the deadlock in the third minute after a clever low drive off the left post. Andrew Wooten found an open Marco Fabian on the right side of the box, allowing Fabian to lay a pass to Bedoya at the top of the box.

The veteran midfielder made no mistake scoring his third goal of the league season.

Kacper Przybylko created room for a good look, but was denied by Hamid who was the busier of the two goalkeepers in the opening half. Philly’s opening pressure continued as Przybylko won a penalty on the verge of halftime.

Junior Moreno was shown a red card after video review, but Przybylko soared the ensuing penalty into the stands. However, the Union would double their lead before the break as Kai Wagner connected with Fabian who roofed a shot past Hamid.

Przybylko slotted in his ninth league goal of the campaign in the 52nd minute, making up for his missed penalty earlier in the match.

Frederic Brillant tapped home a rebound to pull a consolation goal back for D.C. two minutes later, but it wouldn’t start any comeback for Ben Olsen’s side.

After holding off D.C. pressure, the Union added a fourth in the 69th minute as Fabian’s deflected shot beat Hamid for the Mexican’s second of the night.

The Union return to the top of the East and face the Houston Dynamo next, while D.C. United welcomes the L.A. Galaxy to town next weekend.

SEATTLE — Little has gone right for Sporting KC (7-9-7, 28 points) this season. After making the playoffs for eight straight years, it entered Sunday’s match against the Seattle Sounders sitting in 10th place in the Western Conference. But on Sunday night it picked up an unlikely three points in front of 37,722 at CenturyLink Field, perhaps igniting a late push into playoff contention.

Felipe Gutierrez opened the scoring in just the 12th minute, beating Sounders goalkeeper Stefan Frei at the back post from 15 yards out.

Gutierrez doubled the lead from the penalty spot in the 33rd minute, beating Frei down the middle to give the visitors a 2-0 lead. Referee Ismail Elfath awarded the penalty after Sounders left back Nouhou brought down Gerso Fernandes in the penalty area. Nouhou started the match in place of Brad Smith, who sat with thigh pain.

Jordan Morris pulled one back for the hosts in the opening minute of the second half, tracking down a long through ball from Nicolas Lodeiro and besting both Matt Besler and goalkeeper Tim Melia for his sixth goal of the season.

Sporting KC restored its two-goal lead in the 58th minute after Erik Hurtado broke loose on the counter attack to beat Frei for the 3-1 lead.

Morris struck again in the 82nd minute, stepping into a pass from second-half sub Handwalla Bwana. However, the Sounders could not find an equalizer as they fell in front of their home supporters.