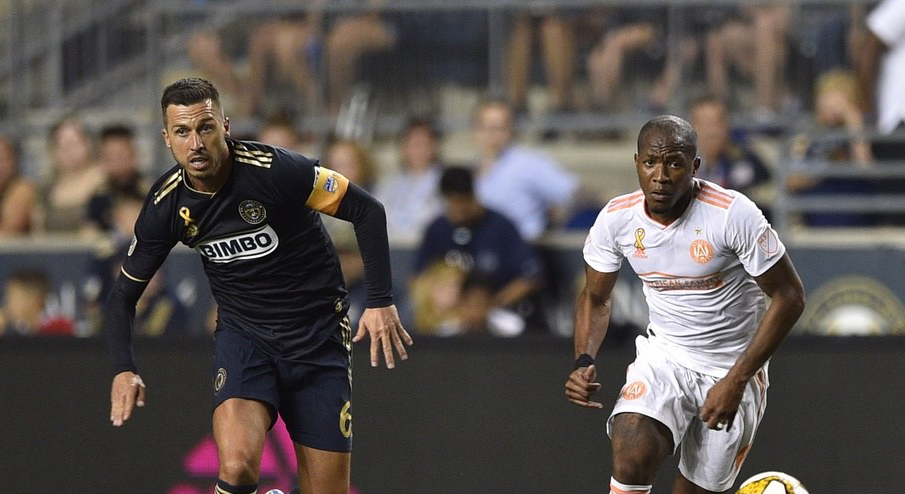 The Philadelphia Union made a major statement on Saturday night, downing the visiting defending MLS Cup champs and clinching a playoff berth in the process.

A 3-1 win over Atlanta United saw Jim Curtin’s side score a trio of goals in the second-half to earn their first-ever win over the Five Stripes. Sergio Santos scored a goal and added an assist off the bench late in the triumph.

Elsewhere, the Colorado Rapids downed the New York Red Bulls 2-0 in Harrison while D.C. United shut out the Montreal Impact on the road.

The Colorado Rapids pulled off one of the more unlikely results in MLS this season on their trip to Red Bull Arena.

The Red Bulls were probably expecting a fairly straightforward affair against a Rapids team without Kei Kamara and Kellyn Acosta. However, they faced an uphill battle thanks to a 14th minute counter attack the resulted in Jonathan Lewis finding the back of the net to give Colorado an unlikely lead.

The hosts continued to struggle up front throughout the match and were vulnerable on the counter. The Rapids had more and better chances at finding an equalizer than the Red Bulls, who had superior possession numbers and more shots. The Rapids did get their second, as well. An 87th minute counter attack cut through the Red Bull defense and allowed Lewis to curl one home for his second of the night,

The Red Bulls will head back to the drawing board after this unfortunate result before flying across the country to take on the Seattle Sounders on national TV on September 15. The Rapids will face the Sounders first, however. They head to CenturyLink Field next Saturday.

A late, late winner gave the Chicago Fire a share of the points against the Columbus Crew at MAPFRE Stadium.

Pedro Santos gave the Crew the lead in the 27th minute with a fantastic goal. He executed a long distance run through the Fire defense and managed to sneak a low shot inside the post past a diving Kenneth Kronholm.

It looked like the Crew were going to hold out for the home win, but Nemanja Nikolic and Przemyslaw Frankowski had other ideas. The two Eastern Europeans paired up for a 94th equalizer to spoil the party in Central Ohio.

The Crew will look to recover from their late failure over the international break before going on the road for a difficult clash with Atlanta United on September 14. Chicago will return home to take on FC Dallas on the same night.

D.C. United didn’t need their star power to down a tired Montreal Impact side.

Despite not having Luciano Acosta or Wayne Rooney, D.C. laid the smackdown on their Canadian opposition throughout the first half. Ola Kamara scored twice for the visitors and Paul Arrola banged one in as well.

That’s all they really needed to get out of Canada with all three points. D.C. were able to sit back and defend their way to victory while allowing Montreal to launch 25 total shots. Bill Hamid came up big with nine saves to preserve the clean sheet, too.

D.C. United will get the international break off before heading to Portland to face the Timbers on September 15. Montreal will also sit for two weeks before hosting FC Cincinnati on September 14.

Toronto FC improved their playoff chances with a solid, if unspectacular, road win at the New England Revolution.

Attacking play was hard to come by in this match until the 74th minute when Toronto finally caught New England out on defense. Nicolas Benezet provided the headed finish from point blank range after Marky Delgado took a shot off goalkeeper Matt Turner’s face.

The Revs were able to pull level in impressive fashion in the 86th minute. Gustavo Bou continued his hot MLS start with a well placed curling effort from outside the penalty area to make sure the points were shared in this one.

Both sides will play next Saturday. Toronto are at FC Cincinnati and the Revs are at New York City FC.

CHESTER, Pa. — The Philadelphia Union made a statement to the rest of Major League Soccer.

Jim Curtin’s side took a firm grasp of the top spot in the Eastern Conference table after a comeback 3-1 home win over Atlanta United. Brenden Aaronson scored his second goal of the season against the Five Stripes, while Kacper Przybylko and Sergio Santos added tallies late in the second-half.

Josef Martinez’s opener came in the first minute of first-half stoppage time as he rounded Andre Blake and tapped home. It was the Venezuelan’s 13th consecutive league match with a goal.

The Union hit the crossbar and post in the opening half in which saw them dominated 64% to 36% in the possession category.

Haris Medunjanin registered his 10th league assist of the season in the 61st minute, sending a ball over the top of the Five Stripes backline. Aaronson called of Przybylko before hitting a low drive past Brad Guzan.

The introduction of Santos played major dividends as he set up Przybylko for the eventual winning goal in the 86th minute. A cross to the left side of the box allowed the German striker to one-time a shot into the top corner. It was his 13th goal of the season.

The Union would hang on for their first win in club history over Atlanta United, now sitting three points clear of the defending league champs.

Sporting KC made it three wins in a row on Saturday after a 1-0 triumph over the Houston Dynamo.

Johnny Russell headed in the only goal of the match in the 12th minute. The Scottish winger got on the end of Graham Smith’s cross and headed it into the bottom-right corner.

Tim Melia made four first-half saves for SKC, while Daniel Salloi rattled the crossbar after Russell had given the hosts a lead.

NYCFC extended their current winning streak to four matches after a 3-1 road success at BC Place over the Vancouver Whitecaps.

Heber’s opener came ten minutes in for the visitors before Gary Mackay-Steven’s left-footed effort in the 26th doubled NYCFC’s advantage in Canada.

Alexandru Mitrita smacked the post in the first-half which would’ve extended NYCFC’s advantage.

Yordy Reyna pulled a goal back for the Whitecaps just after the hour mark, but it wouldn’t start a comeback for Marc dos Santos’ side.

Mitrita’s perfect free kick iced the win for NYCFC who remain in the race for top spot in the East.

Diego Valeri played the hero once again for the Portland Timbers, scoring the lone goal in a 1-0 win at Providence Park over Real Salt Lake.

The Argentine’s long-range shot broke the deadlock in the 16th minute despite RSL’s early pressure.

Brian Fernandez and Sebastian Blanco were denied by Nick Rimando from adding to Portland’s lead in the opening half.

Steve Clark was huge after halftime for the Timbers, finishing with six saves in the home clean sheet.

Jose Zambrano was sent off late for the Timbers which was the lone blemish on what was a successful night for Portland.

San Jose, California — No Matias, no problem. In their second match without their manager on the touchlines due to suspension, the San Jose Earthquakes easily took down Orlando City 3-0 at home Saturday night.

Magnus Eriksson opened the scoring quickly for the Earthquakes, taking a pass from Jackson Yueill and beating several Orlando City defenders into the box, finishing at the far post, beating goalkeeper Brian Rowe.

Wondolowski doubled San Jose’s lead in the 20th minute, timing his run perfectly, capitalizing on a pass from Vako and chipping the ball over Rowe for the second goal. Wondolowski earned his brace just 13 minutes later, first-timing a shot into the upper 90 off of a cross from Cristian Espinoza at the edge of the six-yard box.

San Jose had a few chances to add to their commanding lead in the second half, however, Rowe shutout the Earthquakes in the final 45 minutes of the match.

With the win, and the loss by Real Salt Lake in Portland Saturday night, the Earthquakes propel themselves to second place in the Western Conference with 44 points to end Saturday night. That could change quickly as the winner of Sunday’s Seattle – LA Galaxy match could take that second spot, as could Minnesota United with an upset at LAFC as well.