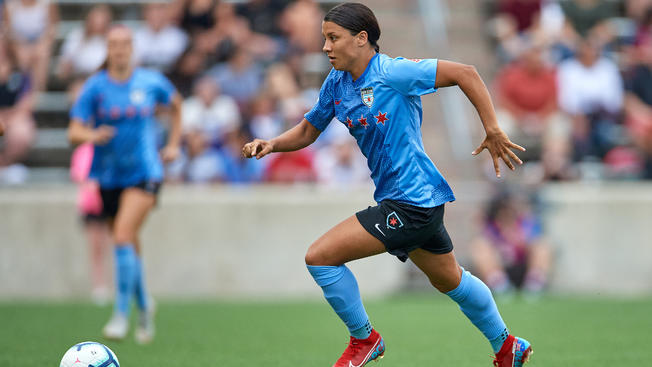 With only two weeks left in the National Women’s Soccer League, both North Carolina Courage and Chicago Red Stars can breathe easy after claiming their playoff spots.

The other two spots remain up for grabs, but barring a Portland Thorns meltdown in the final two games, eyes will be on the battle for the fourth and final spot between Utah Royals and Reign FC who are only separated by goal differential.

In Chicago, Samantha Kerr tied then broke her own goal scoring record with a brace, while North Carolina Courage won the supports shield honor on the road in Utah.

Here’s a closer look at what transpired over the NWSL weekend:

The night couldn’t have been better for Chicago Red Stars on Saturday. On home turf at SeatGeek Stadium, striker Samantha Kerr broke her own NWSL record for goals scored in a season and her brace secured a playoff spot for the team.

Opening the scoring in the ninth minute, Kerr tucked one behind an outstretched Aubrey Bledsoe on an opportunity from the break. Yuki Nagasato would pile on in the 23rd minute to get Chicago up 2-0 early.

Kerr’s record-setting second goal came just after halftime when she got the ball in stride in the box and tapped a dribbler in the near-post side with her right foot. Mallory Pugh would pull one back in the 80th minute, but the Spirit didn’t do enough to make the contest interesting.

The North Carolina Courage earned its third straight Supporters Shield thanks to a dominant performance on the road against Utah Royals at Rio Tinto Stadium.

An early penalty opportunity saw Samantha Mewis score with her right foot to open the scoring.

It may have taken until the second half, but two goals within five minutes sealed the win for the Courage. Jaelene Hinkle took an admirable shot from distance, but Courage keeper Nicole Barnhart made a costly mistake on the save attempted and the ball went through her hands to double the lead.

Moments later, Debhina had the final say on a booming grounded shot from the center of the box.

Still in the hunt for a playoff berth, Reign FC dropped a massive opportunity against struggling Sky Blue FC at home.

The deadlock was finally broken in the 77th minute when Nahomi Kawasumi found a surging Carli Lloyd. Lloyd then drew Reign keeper Casey Murphy off her line and tapped it in with ease.

Thanks to Courage’s win over the Royals, Reign still has a chance to sneak into the fourth and final playoff position but is currently on the outside looking in because of a -3 goal differential.

Not officially, but effectively clinching its playoff berth at home, the Portland Thorns only needed one to top Houston Dash at Providence Park.

The goal came in the 48th minute when Lindsay Hearn fought through traffic to connect a ball to Tobin Heath for a one-timer that Dash keeper Jane Campell couldn’t do anything about.

With an eight-point lead over Utah, Portland is looking likely to clinch with a point next week.