D.C. United has forgotten about last season’s disappointment in the MLS Cup Playoffs and is striving towards a return to postseason play in 2020.

Ben Olsen’s side comes into the new regular season with two key pieces gone from last season’s roster, but a few key arrivals to hopefully take their places. Wayne Rooney and Luciano Acosta have since departed, taking 17 goals and eight assists with them.

Julian Gressel and Edison Flores have joined the fold in D.C., hoping to make an impact straight off the bat for the Eastern Conference club.

“Being able to get a guy like Julian was an exciting move for the club,” D.C. United centerback Steve Birnbaum told SBI. “He’s a versatile player who you could see play a few different positions for us and he’s been good to work with so far. Edison is another guy who is talented and for him it’s all about adapting to a new league.”

“Losing guys like Wayne and Lucho was tough, but that’s what can happen in sports. We still have a lot of key veterans returning from last season and it’s been good in camp so have that familiarity with the guys. The playoff loss sat in our minds for a little, but as a player you have to move on and start focusing on being better for the next season.”

Birnbaum and Frederic Brillant anchor the Black and Red’s backline which also features the likes of Joseph Mora and Russell Canouse. Canouse, a midfielder by trade, saw frequent time at right back in 2019 and is likely to continue in that role going forward. Birnbaum and Brilliant both have over 100 career MLS appearances, with Birnbaum heading into his seventh season with the club.

Bill Hamid remains the No. 1 goalkeeper after being acquired on a permanent deal from Danish Superliagen side Midtjylland. The 29-year-old finished third in MLS with 126 saves a year ago and was a huge part for the club’s league fewest 38 goals allowed in 2019. His return continues a trend of  familiarity within the squad.

“It’s definitely important working with guys who you’ve worked with for a few years now,” Birnbaum said. “You know each other’s strengths and can use that to help get the team better. We know last season we conceded the fewest goals and that is a goal we are aiming for again in 2020. Anytime you can keep the scores low and frustrate your opponents you have a chance to win.”

Junior Moreno and Felipe Martins will bunker down in front of the D.C. United backline after each earning over 25 appearances last season (Martins 10 with D.C., 18 with Vancouver). With those two covering plenty of ground in midfield, it will allow the likes of Gressel, Flores, and Yamid Asad to create chances in the final third.

With Paul Arriola out with a torn ACL suffered during preseason preseason, Ulises Segura, Erik Sorga, and Ema Boateng could also find themselves in the mix for minutes. Arriola totaled 14 goals and 10 assists for the club over his first three seasons, and will be a major loss in production for the Black and Red.

“It’s tough because you never want to see any of your teammates have to go through that and losing Paul this early in the season is a tough blow,” Birnbaum said. “He’s a player who not only is dangerous in the attacking end, but he makes sure to defend and win possession back for the team. It will be a collective effort from the guys to help make up for his production this season.”

Ola Kamara will be the main striker for D.C. United following Rooney’s return to England this offseason. The 30-year-old Norwegian remains a quality striker in MLS, scoring three goals in six appearances last season since his transfer from Chinese side Shenzen FC.

Griffin Yow is a young talent for the future, but the starting striker’s job is Kamara’s to lose.

“He’s a quality player in this league and he is good in front of goal,” Birnbaum said. “I never knew how good he was at holding the ball up as well which I quickly learned last season when he joined. He’s going to be a huge part of our offense and even more now with Paul’s injury.” 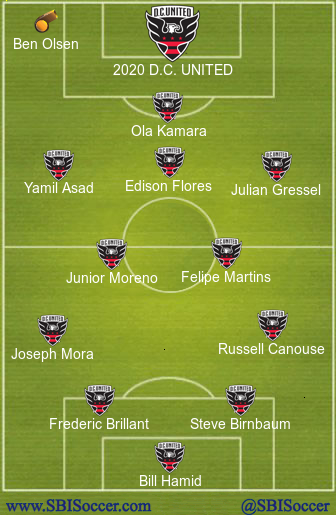 Although Julian Gressel may get the majority of the attention, Edison Flores is a talented player whose role will be key in 2020. The 25-year-old Peruvian joined from Liga MX side Morelia after a seven goal, four assist haul in 2019. With Arriola out for the season, Flores gives Ben Olsen another creative option in midfield alongside the likes of Gressel and Yamil Asad.

Asad totaled 16 goals and 16 assists in his first two MLS seasons and will need to show the same productivity in 2020. With Luciano Acosta gone, the 25-year-old Asad will look to form a connection with South American teammate Flores. Both players are clever in possession and could begin an intriguing partnership in the heart of D.C.’s midfield.

After a fifth place finish in 2019, the goal for D.C. United will be to get back the playoffs.

Ben Olsen may have some new players coming in, but his roster still has what it takes to be successful. Led by the experience of Birnbaum, Brilliant, and Hamid, the back end of D.C.’s squad will be key to how strong they can be.

Martins and Moreno will be hard to break down in the longevity of the season, giving the experienced backline even more help when needed. Gressel’s arrival should give D.C. a new element in attack, pairing nicely with the talented duo of Asad and Flores.

Additional forward help is an area that Olsen could always look for in the summer, but Kamara’s 52 MLS goals in 101 appearances speaks for itself. The veteran’s stay in D.C. will also help groom 17-year-old Griffin Yow for the future.

D.C. United posted the second-best road record in the Eastern Conference, going 6-5-6 in their 17 matches. However, they were seventh out of 12 teams with a 7-6-4 home record, something that will need to change at Audi Field if they want to improve their regular season standing.

“It is something we are striving to be better at, especially with our new stadium,” Birnbaum said. “We know teams don’t want to come here and deal with our fans and the atmosphere, so now it’s up to us to come up with good results. We want to be consistent on the road as well so both numbers we are aiming to improve in 2020.”

After four defeats in the month of August, D.C. United needed a five-match unbeaten streak to make the playoffs. That is a trend that the Black and Red cannot afford in 2020 with numerous other teams in the East improving their rosters, and Inter Miami looking ready for the challenge. Regardless, they should be in the mix with the top teams in the East going forward.

“Our goal is to win MLS Cup, but we have to get to the playoffs to do so,” Birnbaum said. “We just have to keep working hard at what we know we’re good at and start off the season strong with two home games. I am excited to see what we can do.”