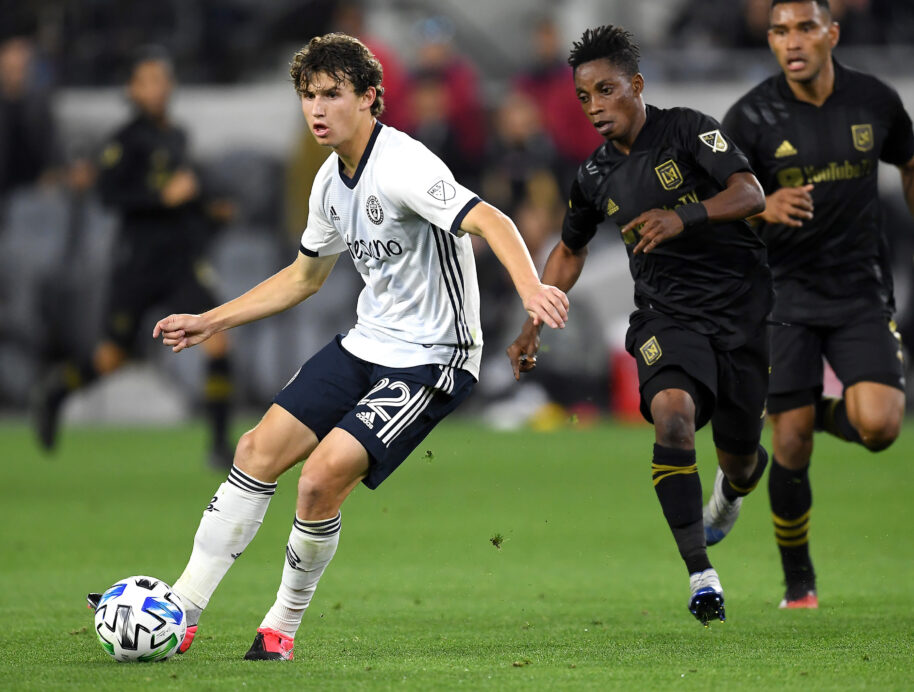 The Philadelphia Union picked up their first point of the 2020 MLS regular season on Sunday night in a thrilling 3-3 draw with defending Supporters’ Shield winners LAFC.

Jim Curtin’s side went toe-to-toe with the Western Conference favorites and thanks to strong outings from several key players, were able to cause LAFC issues in their own backyard.

It was a performance that was miles better than their opening day loss to FC Dallas, and one that will certainly go down as one of the more memorable this season.

Andre Blake put in a Man of the Match performance with eight saves for the Union while Brenden Aaronson and Sergio Santos both impressed in attack. Jakob Glesnes’ first MLS goal was a memorable one as the Norwegian center back scores on a blistering free kick from 40-yards out.

Still, the Union had numerous chances to walk away Banc of California Stadium with three points and conceded three equalizers from LAFC in the process. It was a step in the right direction against one of the top teams in the league, but Curtin will still be a little disappointed in his team’s inability to hold a lead on the road.

Up next for the Union is a two-game home stand against the San Jose Earthquakes and D.C. United respectively over the next two weekends.

Jose “El Brujo” Martinez made his MLS debut on Sunday after being an unused substituted in Week One at Dallas.

The 25-year-old Venezuelan impressed in the middle of the park, completing 85% of his passes and showing aggressiveness on every chance he could get. There were three instances in the match where Martinez could be seen with blood coming out of his nose from an early clash with Latif Blessing, something that Union fans will love about the guy’s toughness.

Martinez filled in for Warren Creavalle, who was used against Dallas, and gave Curtin a glimpse at what he can offer in midfield. He won two tackles, five duels, five interceptions, and made 10 recoveries. It was an all-around good outing for Martinez who will now look to make a starting role more consistent throughout the season.

Teenage midfielder Brenden Aaronson continued his growth as one of MLS’ top young midfielders with a strong outing against LAFC.

The Union Homegrown held his own against numerous MLS veterans while also getting on the scoresheet. It was a great way for Aaronson to celebrate being named to the U.S. Under-23 Men’s National Team Olympic Qualifying roster for the upcoming tournament in Mexico.

The midfielder showed the ability to get only get into the final third, but track back and win possession back in a frantic back-and-forth affair. Aaronson had two good offensive looks on goal, one saved by Kenneth Vermeer and the other beating the Dutch keeper.

Sunday’s outing showed why Aaronson is the future of the Union’s midfield for years to come.

The Philadelphia Union will be grateful to leave with a point from Banc of California Stadium, but ultimately could’ve had more in the end.

On all three occasions in which the Union scored, LAFC needed no longer than 10 minutes to equalize, which could be a worrying sign going forward for the club.

The ability to hold leads on the road is something the Union improved on in 2019 and will just as important to the club’s success in 2020. All three LAFC goals came from mistakes from the Union defensively, including the foul by Jose Martinez to set up Carlos Vela’s free kick goal in the first half.

To be fair, the Union had two fresh faces in the starting lineup with Glesnes only making his second MLS start and Matt Real filling in for the injured Kai Wagner. A former defender himself, Curtin will be itching to get even more confidence in his team going forward with two games coming at home.

Andre Blake (7.5) – Andre Blake put in a Man of the Match performance for the Union, making eight saves in the draw. The Jamaican veteran denied the league’s attack from running riot in Los Angeles while putting his body on the line on several occasions. Blake continued to show why he is one of the top goalkeepers in MLS.

Matt Real (5.5) – In his second start of the MLS season, Matt Real did a solid job of helping contain Carlos Vela on the outside. Sure, Vela scored at home for the 12th consecutive game dating back to 2019, but Real limited Vela’s other opportunities on goal from outside of the box.

Mark McKenzie (5.5) – Mark McKenzie was quiet on the night, but ultimately held his own against the league’s top attack. He won six of eight duels on the night while also successfully completing two tackles. Despite only making nine passes, it was another valuable 90 minutes for McKenzie’s growth as leader of the backline.

Jakob Glesnes (7) – Jakob Glesnes showed why the Philadelphia Union went out to get him following the departure of Auston Trusty this offseason. The Norwegian scored a wicked free kick goal just inside the midfield line to send Union and MLS fans bonkers. He made 12 clearances on the night, the most of any Union player.

Raymon Gaddis (6)– A longtime veteran with the Union, Gaddis held his own against Brian Rodriguez. The 30-year-old is known for his defensive ability as a one-on-one defender and held the Uruguayan to one shot in total on the night.

Jose Martinez (7) – It was a strong debut for Martinez who was aggressive in defense for the Union. Martinez held firm against Mark-Anthony Kaye in midfield and forced the Canadian into one of his more forgettable performances in the Black and Gold.

Alejandro Bedoya (6) – Bedoya wasn’t at his sharpest against the Union, but ultimately gave his all for the Union before leaving with cramps. He won 10 of 15 duels in midfield and worked tirelessly to keep the LAFC attack at bay.

Jamiro Monteiro (6) – Monteiro registered one assist on the night, but wasn’t at his most creative in attack otherwise. The 25-year-old lost 11 of 13 duels individual battles while being forced into more defensive work than offensive.

Brenden Aaronson (7.5) – Aaronson was the Union’s top outfield performer on Sunday night, scoring late in the second-half and holding his own against numerous MLS veterans. The 19-year-old wasn’t afraid to stick his nose in and win possession back while also being good in one-on-one attacks.

Sergio Santos (7.5) – Santos’ first goal of the 2020 season came off a fine right-footed finish in the opening half. The Brazilian’s curled effort left Kenneth Vermeer scrambling before ultimately failing to concede his first goal of the season. Santos also registered an assist on Aaronson’s finish while working tirelessly down the channels to hold possession for his team.

Kacper Przybylko (6.5) – For the second match in a row, Przybylko looked lost in the attack, failing to test Vermeer outside of a shot in stoppage time later called offside. The German did well in his hold-up play, but couldn’t really get it going against Dejan Jakovic, who was able to keep him in check.

Ilsinho (6) –  The Brazilian Ilsinho entered the game after the hour mark for Philly, but didn’t have a traditional impact. He won four duels, but failed to create much in the final third as the Union pushed for more goals.

Anthony Fontana (N/A) – Fontana only played six minutes as a substitute, picking up a yellow card in the process. It was good experience for the Homegrown, but ultimately not much to judge for a grade.

Jack Elliott (N/A)– Stoppage-time substitute who won one duel and made two recoveries in limited time. Did good to help close out the draw for the Union.