Akinola, Nagbe, Blake and the MLS is Back Group Stage Best XI

The MLS is Back Tournament’s group stage is in the rearview mirror, as eight teams make the trip home after seeing their bids for a place in the knockout rounds fall short. The group stage had plenty of surprises, and disappointments, but above all, there were some truly outstanding individual performances.

Selecting the best performers in the group stage is no easy task. Not with 16 teams having reached the group stage, and all of them boasting individuals who stepped up to help them navigate the opening round.

SBI’s picks for the group stage Best XI are dominated by the Columbus Crew, the only team to finish a perfect 3-0 in the group stage. A total of nine teams are represented, meaning there are certainly some teams that missed out despite having very worthy candidates.

Here are SBI’s picks for the MLS is Back Group Stage Best XI: 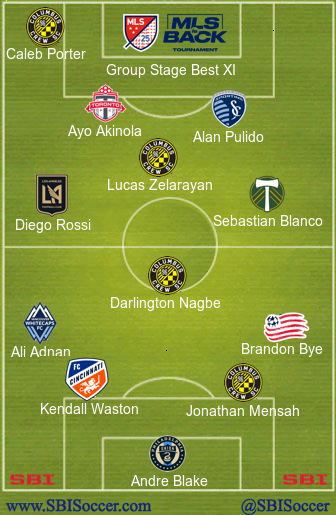 The Union finished 2-0-1 in group play, surrendering just two goals in large part due to Blake’s heroics. The Jamaican goalkeeper made a combined 16 saves, many of the acrobatic variety, to help the Union advance.

The Whitecaps took a patchwork squad to Orlando, but one of the first-team stars to make the trip was Adnan, who was pivotal to Vancouver’s surprise qualification for the knockout rounds. He helped set up the winning goal in the group finale triumph over the Chicago Fire.

The tournament didn’t start off well for Waston and FC Cincy, but the 4-0 loss to Columbus was only a stumbling block. Waston stepped it up and led the defense in big upset wins over Atlanta United and the New York Red Bulls.

New England’s defense has been one of the surprises of the tournament, and Bye’s emergence as a rock-solid right back has been another example of a young player thriving under Bruce Arena.

You can argue that Nagbe has been the most influential player in the tournament to date, and while he hasn’t racked up goals and assists, his finger prints are all over the Crew’s success, both defensively and offensively.

You can toss a coin between Zelarayan and TFC’s Alejandro Pozuelo for this spot, but the nod goes to Zelarayan for helping the Crew to a perfect group stage record. His amazing free kick in the opener set the tone for what has been a stellar tournament so far.

The Timbers was arguably second only to the Crew for best group-stage showing and Blanco was at the heart of that success. His dynamic work in the Timbers attack helped those around him flourish, like Jeremy Ebobisse, and helped the Timbers win their stacked group.

Though he may have been quiet in the group finale against Portland, Rossi was magical in the romp over the Galaxy, with his four-goal effort, and played a vital role in the all-important comeback draw against Houston.

The young striker is the breakout player of the tournament, making the most of his opportunity, scoring five goals, including his hat-trick against the Montreal Impact. Now, fans on both sides of the border are wondering which national team he will play for, while TFC fans hope he can keep it going in the knockout rounds.

There are about a half-dozen other strikers who were worthy of this spot, but Pulido gets the nod for leading the SKC attack to a first-place finish in Group D. Pulido registered a goal or assist in each game, and he helped set up both SKC goals in a vital win against Real Salt Lake.

What do you think of SBI’s Group Stage Best XI? Who was left out that you feel was most deserving? Who are you happy to see honored?