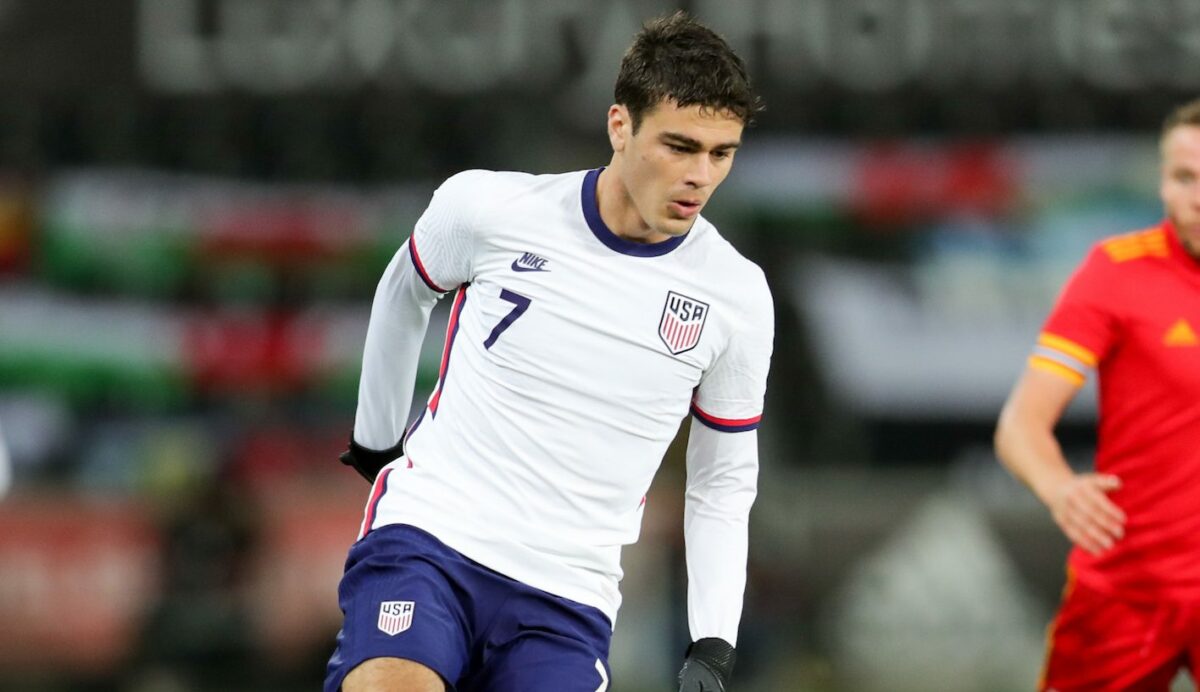 Weston McKennie, Samantha Mewis, and Giovanni Reyna are among 17 finalists that have been nominated for three different U.S. Soccer awards on Wednesday.

Joining McKennie on the list for the Male Player of the Year are Christian Pulisic, Tyler Adams, Sergino Dest, Gyasi Zardes, and Jordan Morris. All six players have put in strong domestic campaigns for their respective clubs in the calendar year, but have not featured as much as possible for the USMNT due to the COVID-19 pandemic.

McKennie made two USMNT appearances in 2020, while also making a move to Serie A side Juventus on loan this season. The midfielder recently scored his first Champions League goal for the club in Tuesday’s 3-0 win over Barcelona and also scored in a 2-1 Turin Derby win last weekend.

The 22-year-old Pulisic did not feature for the USMNT in 2020 due to a combination of individual injuries and the COVID-19 pandemic. However, Pulisic did impress in his first season with English Premier League side Chelsea, scoring 10 goals in all competitions and helping the Blues advance to the knockout stage of the current UEFA Champions League.

Morris has helped the Seattle Sounders reach the 2020 MLS Cup Final after delivering a strong season for the MLS club. The 26-year-old has scored 11 goals and registering nine assists in 25 combined appearances, but did not appear once for the USMNT due to the pandemic.

Dest made the move from Ajax to Barcelona this offseason and since has scored his first Champions League goal for the club while making a pair of appearances in Gregg Berhalter’s squad. The fullback will be expected to play a major role for the USMNT in 2021.

Zardes will square off with Morris in Saturday’s MLS Cup Final after helping the Columbus Crew win the Eastern Conference Championship. The 29-year-old led the Crew with 14 goals and also chipped in five assists in all competitions.

Adams has continued to be a consistent player for RB Leipzig, helping the Bundesliga side advance in the Champions League with Tuesday’s win over Manchester United. The midfielder has made 12 combined appearances for Julian Nagelsmann’s side this season and played in both of the USMNT’s November friendlies.

Mewis headlines finalists for Female Player of the Year

Six U.S. Women’s National Team players are up for the annual Female Player of the Year award with Samantha Mewis, Christen Press, and Abby Dahlkemper among the six finalists.

Dahlkemper led the USWNT in minutes played for the second year in a row and played almost every minute for her club during the adapted NWSL season.

Crystal Dunn was the only player to start every game in 2020 for the USWNT and continued to develop into a top outside back for Vlatko Andonovski’s side.

Lindsey Horan finished the year tied for the team lead in goals, and was consistently one of the top players in the NWSL through the Challenge Cup and Fall Series.

Mewis scored four times at the Women’s Olympic Qualifying Tournament and while also delivering several strong performances at the SheBelieves Cup. She also made the move to Manchester City this summer and helped the club win the English FA Cup after scoring in the final.

Press finished tied with Horan for the team lead in both goals (7) and assists (3). She has also embarked to England at club level, joining international teammate Tobin Heath at Manchester United.

2020 will see a player become a first-time winner for the Female Player of the Year award.

It will be a first-time winner as well for the U.S. Young Male Player of the Year award with three finalists coming from Europe and two from MLS.

Reyna has become a regular in Lucien Favre’s squad at Dortmund, featuring in both the Bundesliga and UEFA Champions League. The 18-year-old has not only scored his first UCL goal this season, but also made his first two appearances for the USMNT in November.

Musah became the first player to start two matches for the USMNT before his 18th birthday and also signed a new long-term contract with La Liga side Valencia after earning consistent minutes in the first team.

Richards has also debuted in the Champions League in 2020 for Bayern, while registering his first assist this season. The defender helped Bayern II win the 3. Liga title last season and since has debuted for the USMNT in the November European friendlies.

Both McKenzie and Aaronson played vital roles for the Philadelphia Union, helping the club win the Supporters’ Shield, its first trophy in club history. They both made their USMNT debuts in a 1-0 February friendly win over Costa Rica and are in the squad for tonight’s friendly vs. El Salvador.

Votes for U.S. Soccer Player of the Year awards are collected from respective National Team coaches, National Team players who have earned a cap in 2020, members of the U.S. Soccer Board of Directors, U.S. Soccer Athletes’ Council, National Women’s Soccer League head coaches for the USWNT and American soccer league (MLS and USL) head coaches for the USMNT, select media members and former players and administrators. In addition, select college coaches vote for the USWNT award.