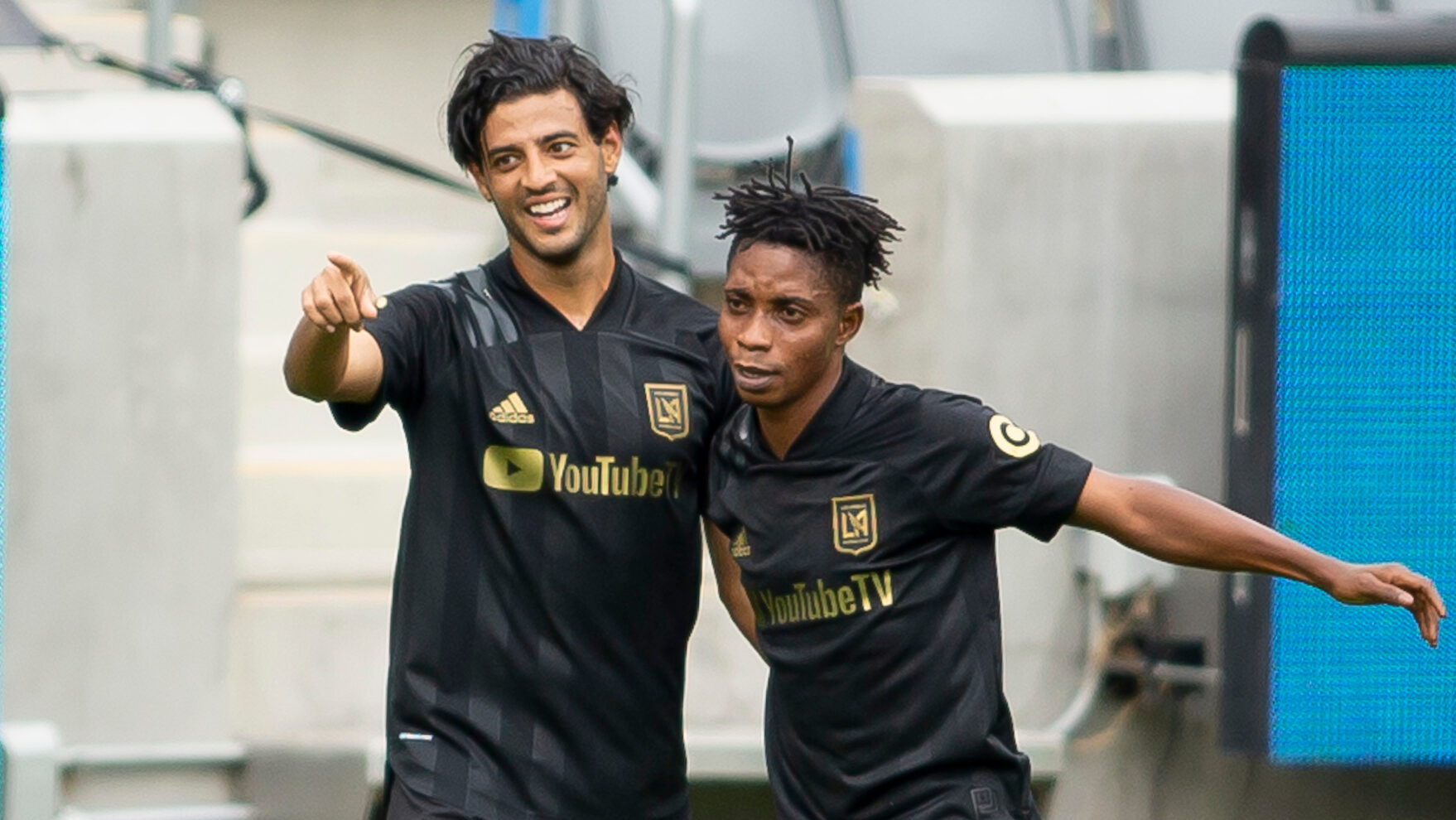 Will year three be the year LAFC finally buries their postseason demons?

For Los Angeles FC, year two in MLS was a small step back from their smashing debut season, but this offseason Bob Bradley and the front office have made subtle moves to ensure year three will be another step forward for the club.

Like many teams, LAFC struggled last year with all the different variables that made for a chaotic MLS season. The injury-bug hit the team hard and reigning MLS MVP Carlos Vela missed two months with a sprained knee and only started four games in 2020.

Striker Adama Diomande also departed mid-season and MLS veteran Bradley Wright-Phillips stepped up in a big way to fill the voids left by Diomande and Vela, but he departed to join Columbus Crew this offseason.

Designated Player Bryan Rodriguez also failed to light up MLS in his second season with the club and has since been shipped out on loan with an option to buy to C.D. Almeria in the Spanish second division.

It was not all bad last season for the Black and Gold, they came up short against Tigres in the CONCACAF Champions League final, made the playoffs and Diego Rossi showed-out with Vela sidelined, winning the MLS Golden Boot in the process. Rumors have started to swirl that Rossi may be on his way to Europe in the near future, so the pressure is mounting on this LAFC team to make this season count.

“We know from last year that we can be more consistent with the way we play but, overall, there’s still a lot of moments of very good football,” LAFC head coach Bob Bradley said. “We’re going to continue to try to be a team that goes forward and creates chances and wins the ball back and pushes games.”

To address consistency, adding depth has been a focus in the offseason with players being added in all three areas of the roster.

Acquired in a trade with Real Salt Lake, Baird joins LAFC expected to be the replacement for Bryan Rodriguez. The 2018 MLS Rookie of the year is a versatile attacker with a profile that is a perfect complement to Carlos Vela and Diego Rossi. Naturally right-footed, Baird can play anywhere among the front three and at times may be asked to play in tandem with Rossi or Vela if Bradley elects to rotate minutes.

Playing as the third fiddle, Baird will have ample opportunities in front of goal and if it all clicks, LAFC may have three MLS All-Stars up top and an MLS Cup to show for it.

Pressure is on: Kenneth Vermeer

Having Kenneth Vermeer in goal was an aggravating adventure for Bob Bradley in 2020, which is why Vermeer isn’t guaranteed to hold onto the starting job in 2021.

In two preseason matches against the New England Revolution, LAFC conceded five goals and the starting job remains unsettled ahead of the season opener against Austin FC on April 17.

Sisniega, 25, is the younger of the two and the hope is he can be the long-term answer at the position, but Bradley has been non-committal about who will start to open the season.

The pressure is very much on Vermeer, who at 35 is facing what is likely his last chance to be a regular starter. He will need to be much more consistent than he was in 2020. If he isn’t, Sisniega will take the job.

The LAFC attack is centered around Carlos Vela and Diego Rossi, but Rossi’s success playing centrally last season, coupled with the aforementioned departure of Bryan Rodriguez means there is an open spot up for grabs and a variety of ways the front three can be arranged.

The void left by Rodriguez will likely be filled by offseason acquisition  Corey Baird. Baird, 26 was acquired from Real Salt Lake in a trade for $500,000 in general allocation money spread over 2021 and 2022, an international roster spot and the potential for future allocation money.

“You see the way they play, the attacking, the pressing, the chances they create every single game and how they have a very distinct way of going about things,” Baird told SBI. “So as an attacker it is definitely exciting to go to a team like this.”

How the front three comes together positionally remains to be seen, but in LAFC’s final preseason match against the New England Revolution, it was Vela on the left, Rossi in the center and Baird on the right.

“In general we don’t want our front three to be stagnant and if I can find a way to compliment them (Vela and Rossi) and work with them that’s my goal,” said Baird. “I don’t have a preferred position and I think my ideas as an attacker is going to be the same if I’m playing the middle or out-wide”.

Behind Baird, Rossi and Vela, Cal Jennings was acquired in the from Indy Eleven in the USL and Danny Musovski is expected to play rotational minutes at striker.

There is also the lingering question of Bryan Rodriguez returning to Los Angeles after his loan with CD Almeria expires. There is an agreed option to purchase if Almeria achieves promotion and the Spanish club currently sits in third, a promotion-playoff position.

If Rodriguez departs, LAFC will have an open Designated Player spot available to add to an already stacked roster.

In the midfield, Eduard Atuesta is one of the best in the league at his position, Mark Anthony-Kaye took a step forward last year and Bob Bradley expects Latif Blessing to rebound after an inconsistent 2020 season.

“It’s been a good preseason for Latif, like a lot of players he was up and down last year,” Bradley told reporters. “I didn’t think his focus was always where it needed to be, but I think he’s had a good preseason.”

The attack receives most of the headlines and rightfully so, but having Ecuadorian Senior Men’s National team member Jose Cifuentes and Uruguayan youth international Francisco Ginella as depth options makes the midfield an area of great strength for LAFC.

Defensively, Eddie Segura anchors a backline that returns all four members from last season, but South Korea Senior Men’s National team member Kim Moon-Hwan has been signed to challenge Tristan Blackmon at the right back position.

Moon-Hwan played 30 minutes in the first preseason match against the Revolution on April 3, but missed the second match up with a minor knee injury. Bob Bradley labeled the injury, “Not so serious, but it has slowed him down”.

Marco Farfan was also acquired via trade from the Portland Timbers and will compete for minutes at left back behind Diego Palacios.

The biggest question mark in the starting lineup for LAFC is who Bob Bradley elects to go with as the starting goalie. Both Kenneth Vermeer and Pablo Sisniega have been given the opportunity to seize the starting job, but neither has made a compelling case to lock-down the position.

“These two guys are pretty even, each one has their own strengths. Those are things that we consider as we make decisions and I think the real answer will come as we get into the regular season,” Bradley told reporters.

In terms of youngsters, Bradley singled out defenders Antonio Leone and Erik Duenas as players that have stood out during the preseason.

“Eric has been very good. Coming in he looks like a small guy and you don’t think you’re gonna get this guy flying through the tackles and being physical, but he’s definitely impressed me a lot,” Baird said of Duenas.

How youth players are integrated into the first team will change this season for LAFC with the announcement of the Las Vegas Lights as their USL-affiliate beginning this season.

“I spent a little bit of time with the Monarchs and it was a good stepping stone for me to get acclimated. We have some really talented young guys and with the depth of this team it might be hard for them to get playing time, but if they can still be getting games at times with the Lights, I think that’s just gonna help their development overall” said Baird.

Across the roster, this LAFC team is one of the most talented teams in the league and even though Baird is a new addition, he knows LAFC is focused on winning trophies.

“I think for a team like this, the goal is to win silverware. We need to get back in the Champions League and make sure we’re doing all the small things right right now translating good opportunities to achieve those goals.”