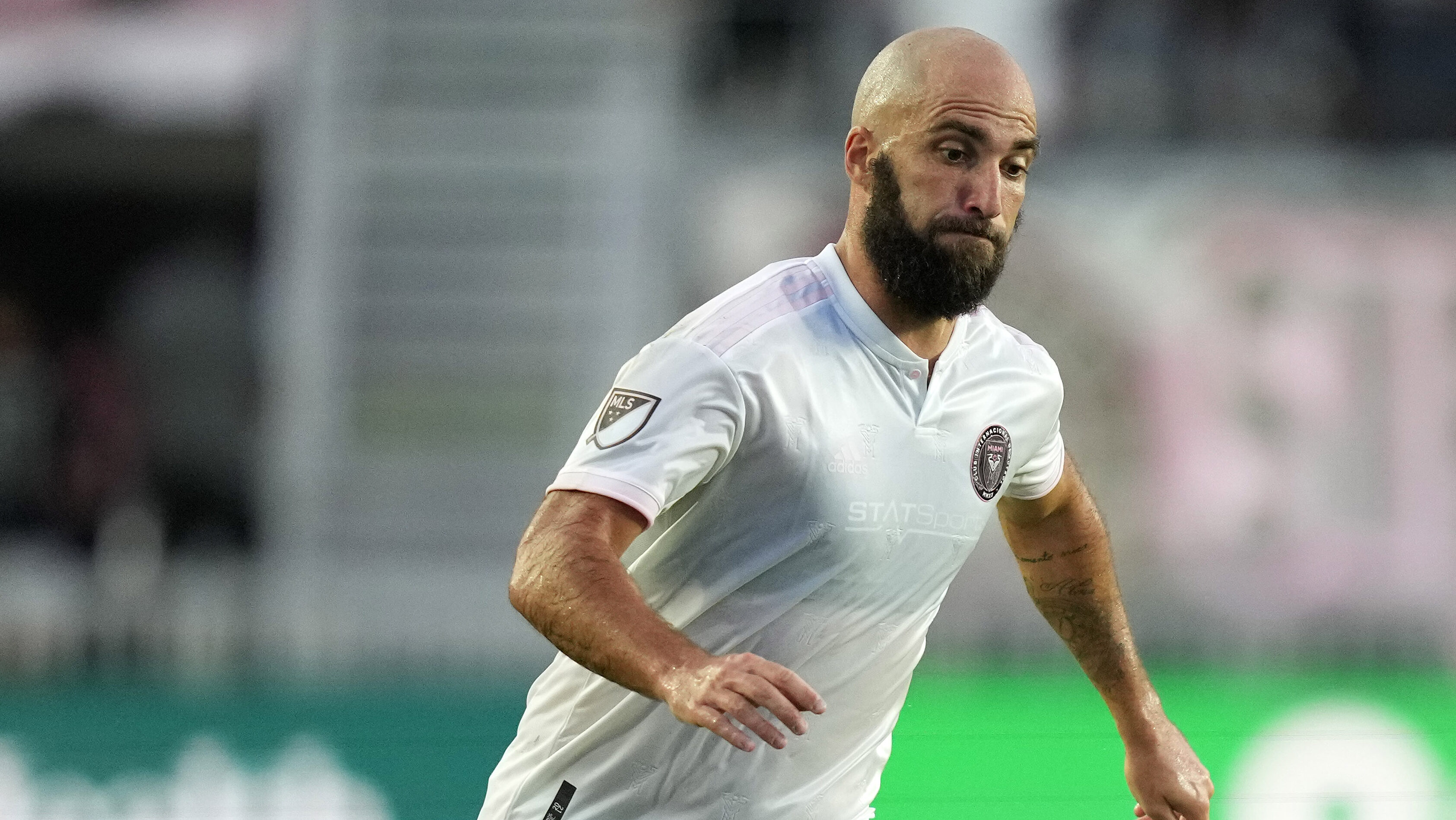 A 1-1 draw at home against the Philadelphia Union on Sunday night stopped Inter Miami’s string of consecutive defeats at six matches, but the last-placed South Florida side remains without a victory in its last seven. Inter Miami came painstakingly close to reacquainting itself with a triumph at Drv Pnk Stadium, but a late equalizer from the Union popped the Herons’ bubble and forced them to share the spoils.

“It just felt as if it was ripped away from us, but Rome was not built in a day. We know it is going to be a long road,” said Inter Miami head coach Phil Neville. “… It just hurts because this football club is hurting, the supporters are hurting, the ownership is hurting, the players and staff are hurting, and we so desperately wanted that three points because you want to come in to work tomorrow with a different feeling than we have had for the last six games.

“We want to reverse that vacuum that is in front of us.”

While the final result was not the desired one, there were some good things to take away from the game. Let’s start with the performance because this was better — much better — than the disaster that took place days earlier in the 5-0 pummeling vs. the New England Revolution.

Inter Miami not only put forth an improved effort that allowed the team to compete — even Gonzalo Higuain was tracking back into deeper spots at times to try and apply pressure, a rare sight — but the players on the whole were sharper with the ball. They even knitted together some good attacking sequences from back to front in part due to the presence of the technical and smooth Federico Higuain, avoiding the type of Route 1 play that has been seen so ofter this year.

Still, it was not enough. For all the good play Inter Miami delivered at times, the side still struggled to both generate clear-cut scoring opportunities and be efficient with the ones it had. Union third-string goalkeeper Matt Freese was not overly tested despite making five saves, and as such did not have to make many big stops.

That lack of punch in the final third has been a major issue throughout the course of 2021, which is why Inter Miami has a league-low 10 goals this year, and it once again proved costly because it allowed the Union to always remain within reach.

Resolving that ongoing dilemma in the final third is absolutely paramount to Inter Miami’s chances of not only ending this winless skid, but having any shot at making a push for a playoff spot. It would also help reignite a fan base that appears to be growing disinterested due to the lack of results.

Taking more risks by throwing more numbers forward at times might be a solution or it could be that changing the tactical approach to try and play through the middle is what is needed. Perhaps just finding a way to become more calm, composed, and clinical with opportunities may be the answer.

Whatever the case is, Inter Miami has plenty to address. This draw was a move in the right direction, but it was just a small one.

“It is baby steps,” said Neville. “It is a foundation to start building from, but it is just a start.”

One of the biggest talking points from Sunday’s showdown was that Gregore was named captain for the game. The development was notable because the midfielder was not one of the four players that Neville had curiously elected to share the armband at the start of the year.

The reason for the decision was twofold. One, Neville had realized after Wednesday’s dreadful display that his unorthodox approach of rotating the captain duties was causing confusion. Two, the humble but tenacious Gregore embodies everything Neville is looking for in a team leader.

“Gregore is an extension of me on the field (and) the way I want our football team to play” said Neville. “He is an extension of the values that I want this football club to have. Hs passion, his quality, his never-say-die attitude, the way he speaks to people, his commitment to wanting everybody to do well.”

“I take responsibility of the four-captaincy model,” added Neville. “I told the players the other day I do not think it was working. I think it created a little bit of uncertainty in terms of who was leading. I said Gregore will now be the captain. I thought he captained the side fantastic tonight.”

Gregore not only captained well, but he performed impressively. The 27-year-old Brazilian was a machine throughout the 90 minutes in his first game in 22 days, running nonstop all over the field, showing for the ball, moving it quickly and accurately, marking aggressively, and making his presence felt. It is probably fitting that he wore the new Inter Miami military camouflage top during his post-game presser, because he was a soldier out there.

If there was one thing to criticize about his outing, it was that he lost just enough concentration in the immediate lead-up to the 85th-minute equalizer by failing to track Quinn Sullivan. Even with that, though, Gregore shone  brightly in his first game as Inter Miami captain with inspired play that highlighted his commitment, effort, and quality.

“For me, it is very important,” said Gregore in Portuguese about being named captain. “It was the coach’s decision to give me more responsibility in this group. There are some big players here, so I thank him for giving me that confidence.

“I like that responsibility and hope to repay that confidence he gave me with lots of fight and effort to help Inter Miami have a great season.”

Another player who impressed against the Union was Robbie Robinson.

Not only did Robinson score the opener in the second half with a smart run in behind, but he also demonstrated other good things out on the left flank. He was the biggest scoring threat on the night, a constant outlet, dangerous due to his combination of speed and willingness to go at defenders on the dribble, and put in work defensively,

Robinson also struck at an opportune time, as his 71st-minute effort came just as Neville was preparing to substitute the 22-year-old attacker.

ROBBIIIIIIEEEEEEEE! 🔥#InterMiamiCF takes the lead here at #DRVPNKStadium off a brilliant finish from Robbie Robinson. pic.twitter.com/XU01Qzat7S

Robinson still has lots of room to grow, especially in terms of being more efficient — he missed on two other decent looks — and developing a left foot. He relies on his right far too often, which makes him a bit predictable with his movements and costs him opportunities at goal at times — as was the case in the first half when Gonzalo Higuain hit a nice floated pass inside the penalty area that Robinson pulled back instead of pushing forward.

That said, Robinson is providing a boost to Inter Miami’s attack. He is fit again after recovering from the recurring hamstring issues that plagued him at the start of the season, and finding ways to make an impact.

“It felt great (to score), honestly. It is even better that I am able to come off the field healthy,” said Robinson. “I think that is so important. My rehab and doing everything right, it has felt like a long journey to get to this. It has not been that (long). I was away maybe for a couple months, but I am happy to be back, happy to be contributing to the team, and I think we have good times ahead.”

Nick Marsman (6) — Could not get enough of the cross that led to the equalizer, but was otherwise solid in goal and great with his distribution.

Nicolas Figal (7) — A total turnaround from Wednesday. He was very strong defensively, pushed forward to apply pressure, and helped create some nice sequences with his passing.

Ryan Shawcross (6) — Quietly solid at the back while not getting overly involved in the build-up, finishing the game with just 23 touches.

Leandro Gonzalez Pirez (7.5) — Put out fires by anticipating plays well and passed to near perfection with a mix of short and long balls, ending with a 97 percent accuracy rate that was the highest of any starter on the team.

Kieran Gibbs (5.5) — Held up defensively and forayed forward without being too threatening before coming off due to apparent fatigue in the 51st minute of his first start.

Victor Ulloa (6.5) — Another professional performance in which he did his job by moving the ball well and being defensively sound and disciplined.

Gregore (7.5) — Was a nonstop machine on both sides of the ball in his first game as captain. The only slight was his late lapse in concentration, which proved costly.

Lewis Morgan (4.5) — Had a couple of good moments in the first half, but was mostly left frustrated and quiet in what was an ineffective night for him.

Federico Higuain (5.5) — Moved the ball quickly in the midfield and helped stitch together some nice attacking sequences without being too dangerous.

Robbie Robinson (6.5) — His smart run into space was key to him scoring, and he gave the Union headaches with his speed and aggressiveness. He should have done better on his two other chances, though.

Gonzalo Higuain (6) — Gave more effort on the defensive side and passed very well, delivering the assist and another pair of passes that led to looks. Questions about his fitness abound, however.

Brek Shea (6.5) — Played a part in the opener with a nice forward pass, and was more dangerous in getting forward from the left back spot after replacing Gibbs.

Indiana Vassilev (5) — Limited touches after entering in the 77th minute, but should have done better on a late shot that could have reclaimed the lead.

Jay Chapman (4.5) — Barely got on the ball after entering the game, ending up with just four touches.

Phil Neville (6) – Made lineup changes that improved the team and his decision to name Gregore the new captain was a brilliant one, but needed to make better adjustments late in order to close out the game vs. a Union side that switched tactics and personnel in its successful push for the equalizer.