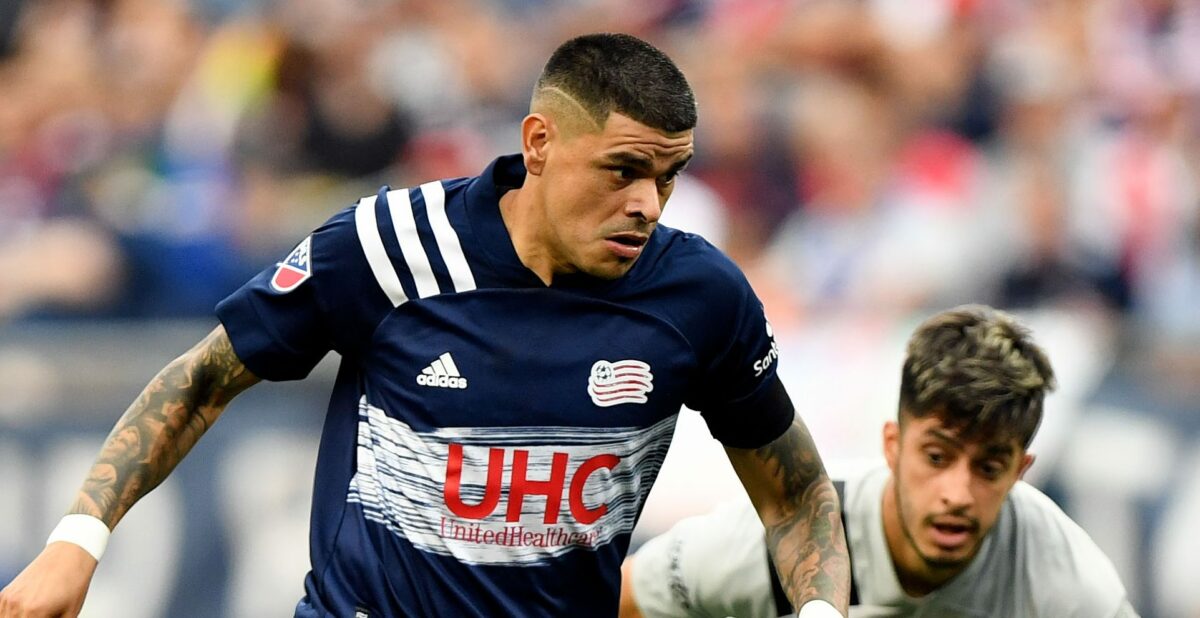 The New England Revolution continued their good run at the top of the Eastern Conference table on Sunday, downing CF Montreal at Gillette Stadium to extend their lead.

Gustavo Bou scored a brace for Bruce Arena’s side, moving them seven points clear at the top of the East. Despite a second-half goal from Djordje Mihailovic, CF Montreal suffered its second loss over the past five days.

Five different NYCFC players found the back of the net in a 5-0 romp over the Lions, moving to sixth place in the Eastern Conference table. Valentin Castellanos led the way with one goal and two assists, while Maxi Moralez, Ismael Tajouri-Shradi and Jesus Medina also scored goals.

FC Dallas went into Saturday’s home match with the LA Galaxy desperately needing a victory after three straight losses, and it was one of the team’s talented youngsters who stepped up to save the day.

Ricardo Pepi scored a hat-trick, becoming the youngest player in MLS history to score three goals in a match, in a 4-0 romp over the Galaxy.

Luchi Gonzalez’s men came out flying against a Galaxy side that has hit a slump in July, with Saturday’s loss dropping Greg Vanney’s men to 1-3-1 this month.

Minnesota United made it consecutive wins against Cascadia sides with a 2-1 victory against the Portland Timbers. An early Felipe Mora goal gave the visiting Timbers a 1-0 lead at Allianz Field, but the Loons eventually turned things around in the second half. First with a Chase Gasper header, and then with a Robin Lod winner.

Man of the Match: Bou continued his strong season for the Revs, scoring in each half and propelling the Eastern Conference leaders to a third straight win. He also delivered four key passes in the final third, but most importantly did what he does best and that’s score.

Moment of the Match: Bou’s second goal would prove to be the winner for the Revs, despite Djordje Mihailovic’s consolation finish in the 79th minute.

Match to Forget: While Mihailovic and Joaquin Torres shined for CF Montreal in attack, midfielder Emanuel Maciel did not. Maciel failed to register a shot from his attacking position, and was stretched out of position on several occasions.

Man of the Match: Daniel Salloi. Salloi delivered the eventual winning goal for Peter Vermes’ side and overall was all over the field for Sporting KC. Salloi did well to hold possession in the offensive side of the field, connecting with his teammates on several occasions.

Moment of the Match: Cameron Duke delivered the final nail in the coffin, coming off the bench and scoring three minutes later to ice the win. Duke’s goal in the 73rd minute truly killed the Sounders chances of a comeback, extending SKC’s unbeaten run to five matches.

Match to Forget: Danny Leyva. Leyva only played 64 minutes in the match, but lost possession three times and overall could not deal with the experienced midfield that SKC possessed.

Man of the Match: Valentin Castellanos ended his goalless drought for NYCFC and also registered two assists in the lopsided win. Castellanos created the most chances in the match (6) and helped the NYCFC attack find its groove in a deserved victory.

Moment of the Match: Orlando City went into the second half still alive for a chance at a result, but Ismael Tajouri-Shradi’s 53rd minute goal truly put NYCFC into cruise control going forward.

Match to Forget: Antonio Carlos came into the Orlando City lineup for Robin Jansson, but was put under pressure all day by NYCFC’s attack. Carlos wasn’t helped by his defensive teammates either.

Man of the Match: Quinn Sullivan. The Union teen did get credited with the assist on the equalizing goal and the substitute made a big impact down the left flank.

Moment of the Match: Late Heroics. Just when it looked like Inter Miami was going to end its winless run, Kacper Przybylko scored an equalizer that just crossed the goal line after good play from the left from Sullivan.

Match to Forget: Lewis Morgan. The Inter Miami winger struggled to influence proceedings, with Union left back Kai Wagner getting the better of Morgan in their 1-on-1 battles.

Man of the Match: Julian Gressel. While Ola Kamara scored the game-winning goal, Julian Gressel did well to set up the Norwegian striker. Gressel’s ability in the final third was on display as he also finished with five created chances in the match.

Moment of the Match: Bill Hamid’s biggest moment came in the 53rd minute as he got low to deny Cristian Casseres an equalizer. Hamid dove to his left and repelled the midfielder’s chance from in the box, keeping DC United in front for good.

Match to Forget: Patryk Klimala has been a positive addition for the Red Bulls this season, but Sunday night saw the Polish forward deliver his poorest performance. He had the fewest touches out of any player who featured for the entire 90 minutes and also failed to record a shot on goal.

Man of the Match: Jonathan Mensah not only delivered the game-winning goal, but was dominant defensively, registering a game-high 14 clearances and three interceptions while completing 90 percent of his passes.

Moment of the Match: The Crew broke through in the 65th minute with a header off a corner kick from Mensah. The Crew scored the goal against the run of play.

Match to Forget: Josef Martinez failed to register a single shot on goal, and only Jake Mulraney had fewer touches and he left the match in the 33rd minute.

Man of the Match: Yeferson Soteldo kept Toronto FC’s attack dangerous all match. He scored in the 2nd minute and generated a few more promising chances.

Moment of the Match: Nick DeLeon finished off excellent buildup play with a fairly easy shot in the 76th minute. The goal put the game out of reach for the Fire as TFC won its first match since July 7.

Match to Forget: Jonathan Bornstein found himself behind the play on both goals. The veteran defender couldn’t react fast enough to Soteldo’s early run and was out of position on Nick DeLeon’s goal.

Man of the Match: Minnesota United has had mixed results syet this season, but Robin Lod has been a major bright spot. Lod turned in another excellent match, scoring the winning goal and finding himself in several more dangerous spots.

Moment of the Match: Minnesota United completed the comeback through Robin Lod’s 85th-minute goal. Minnesota had peppered the goal all night prior to Lod’s breakthrough.

Match to Forget: Dario Zuparic had a hand in giving up both goals, beaten on Chase Gasper’s header goal, and guilty of keeping Robin Lod onside on the game-winning finish.

Man of the Match: Ricardo Pepi became the youngest MLS player to ever score a hat-trick with his stunning trio of goals.

Moment of the Match: Pepi’s first goal may have been his best of the bunch, as he ran onto Andres Ricaurte’s excellent through-pass and finished expertly.

Match to Forget: Derrick Williams had a horrible night, beaten on Pepi’s first goal, failed to clear a pass on his second, and wound up out of position on far too many occasions.

Man of the Match: C.J. Sapong had his best match yet this season, scoring two goals and assisting Nashville’s other goal. Sapong’s 13th-minute goal was his 75th MLS goal.

Moment of the Match: Nashville’s third goal completed the rout, as CJ Sapong scored from a perfect free-kick feed by Hany Mukhtar.

Match to Forget: Gustavo Vallecilla only played 45 minutes, pulled at halftime after a poor showing on Nashville’s first two goals.

Man of the Match: Bobby Wood’s pressure helped force William Yarbrough’s own-goal, and then Wood added a goal of his own for good measure.

Moment of the Match: Wood’s goal was an excellent run and finish and flashed the talent that once made him a U.S. men’s national team staple.

Match to Forget: Yarbrough’s own-goal was shockingly bad, and uncharacteristic of the normally-reliable netminder the Rapids have grown accustomed to having.

Man of the Match: Matias Vera scored an absolute stunner for the only goal either attack could generate on the night.

Match to Forget: Zarek Valentin is a veteran, so he’ll probably accept that his own-goal would have turned into an Earthquakes goal without his intervention, but he’ll still want to forget the feeling of putting a ball into his own team’s net.

Moment of the Match: Jose Cifuentes hit a perfectly-struck equalizer to complete LAFC’s comeback from 2-0 down to eventually earn a 2-2 draw.

Match to Forget: Kim Moon-Hwan will have nightmares about his failed attempt at clearing the cross that eventually led to Caicedo’s opener.