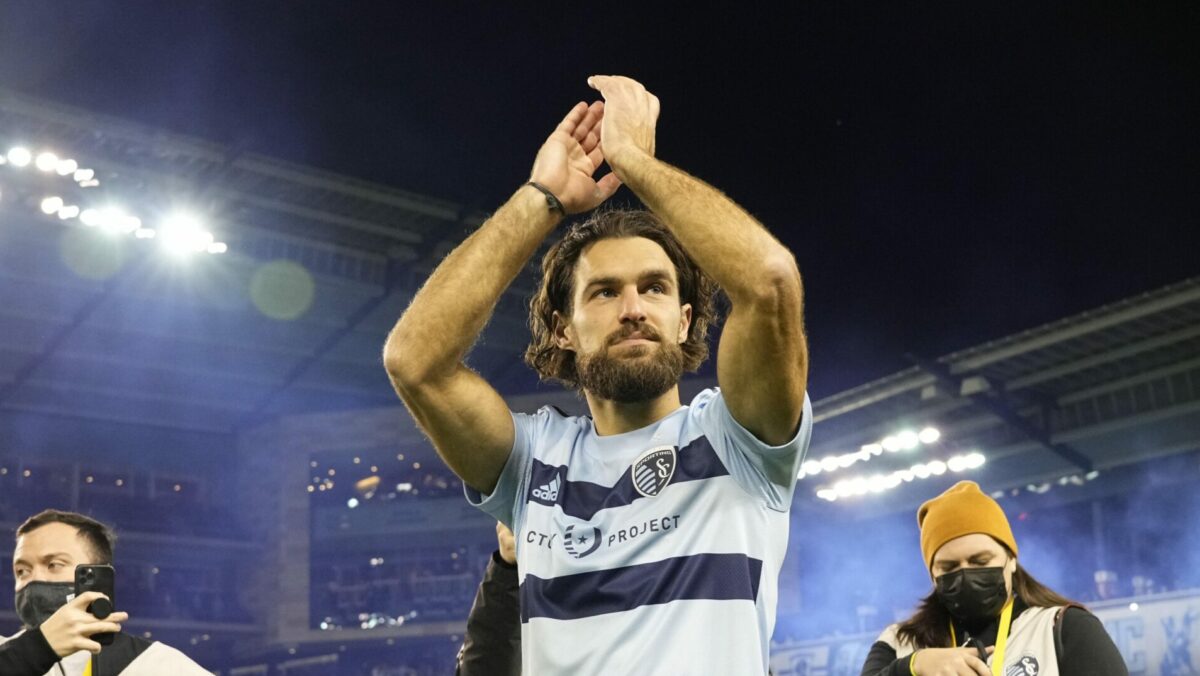 With Sporting Kansas City’s attack humming along in the 58th minute, veteran right back Graham Zusi scored a goal that reminded Sporting KC fans of a younger Zusi, the one who scored long-range goals with regularity and made his name as a U.S. men’s national team player.

Zusi uncorked a shot from 25 yards out that smacked the back of the net in the upper left corner and sent Sporting KC into the next round of the playoffs with a convincing recovery and a renewed danger level. It’s a swagger the team has lacked in the early playoff exits that spoiled the last couple of seasons.

The veteran presence any coach dreams of when the playoffs roll around, Zusi seized Sporting KC’s opportunity in the first round when the team’s form suggested anything but a rousing playoff win. His goal sealed the win, but his assist just before halftime, in which he knocked a long cross back into the area for Khiry Shelton to finish off, was just as important, too.

“Daniel (Salloi) cut in like he’s done so many times and that drew a lot of attention of the defenders, as it should,” Zusi said. “He’s had such a good year scoring goals. It opened up the space for me, he played a perfect ball and in that spot it was always going to be a touch and hit for me. I caught it clean and celebrated with the fans.”

Zusi is quietly having one of the best years of his career, even at age 35. His 86% passing clip is his best mark since 2017. His five assists are his most since 2018, and he’s stayed healthy most of the year to play 2,129 minutes.

Sporting KC coach Peter Vermes remarked that his team showed an excellent mentality in bouncing back from three straight losses to end the regular season. Vermes’ team squandered an opportunity for the Western Conference top seed and thus a bye from this weekend’s playoff round, but Zusi’s leadership and impact on the field ensured the team will get its chance in the conference semifinals.

“His goal was spectacular,” Vermes said. “… He just overpowered the goalkeeper. Him and the team were locked in. They were incredibly disciplined in today’s game.”

The goal Zusi scored Saturday was reminiscent of many he’s scored over the years, especially the ones he spent playing right winger before switching to right back, where Zusi has played since 2016. Long-range goals at home against the Chicago Fire and Portland Timbers seem almost identical to Saturday’s scorcher.

Sporting KC will feel the benefit of Zusi’s goal heading into the conference semifinal. Vermes originally wanted to bring star forward Alan Pulido in as a substitute at halftime, but with the team up 2-1, Vermes opted to wait until deeper into the second half. Pulido recently made a full recovery from an injury that has kept him out since Oct. 3. Then Zusi’s goal eliminated the need for Pulido’s introduction.

“I was going to put him (Pulido) in during the second, half but I felt like it was better to not try and push him for 60, but he definitely had 45 minutes in him, no problem,” Vermes said. “It really helps out a lot, winning the way we did and not having to bring him on is tremendous. Now we can build him up for another so many days and he’s going to feel good.”

An emotionally charged Whitecaps team entered the match with plenty of motivation, as six matches unbeaten saw them qualify for the playoffs on Decision Day under the leadership of interim coach Vanni Sartini.

Sporting KC controlled much of the attacking momentum, despite finishing the game with only 37% of the possession. Zusi played a key role in defense as well as in the final third, with two tackles and 57% of duels won.

“The first game of the playoffs is always kind of a tricky one,” Zusi said. “The energy is just so high and the games can be a bit hectic. I thought we were very smart in our play tonight. We didn’t try to force anything while playing out of the back initially and then our guys up top, when we did play long, were fantastic in their hold-up play. They allowed the rest of us to come up there and help them as well.”