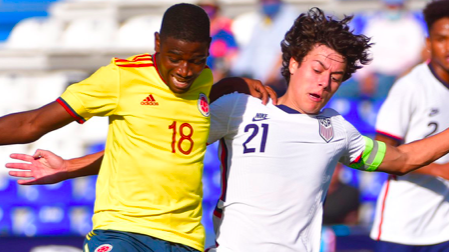 The U.S. under-20 men’s national team rebounded from its opening match loss at the 2021 Revelations Cup by earning a draw on Saturday against Colombia.

Caden Clark scored the lone goal for Mikey Varas’ side in a 1-1 draw with Colombia, but the Americans could not hang on for the victory after a 95th minute equalizer from the South American side. Clark captained the side while several other players got their first starts in the competitions, such as Malick Sanogo, Quinn Sullivan, and Bryan Gutierrez.

Clark’s panenka finish came from the penalty spot in the 35th minute, boosting the Americans in front 1-0 before halftime.

Colombia fought back in second-half stoppage time though to earn a 1-1 result as Juan Pablo Angel’s son Tomas was able to beat Alexander Porto.

The USMNT U-20’s will conclude its involvement in the Revelations Cup on Tuesday against Concacaf rivals Mexico, which defeated Brazil, 2-1, on Saturday night. Brazil routed the Americans, 4-0, on Matchday 1.