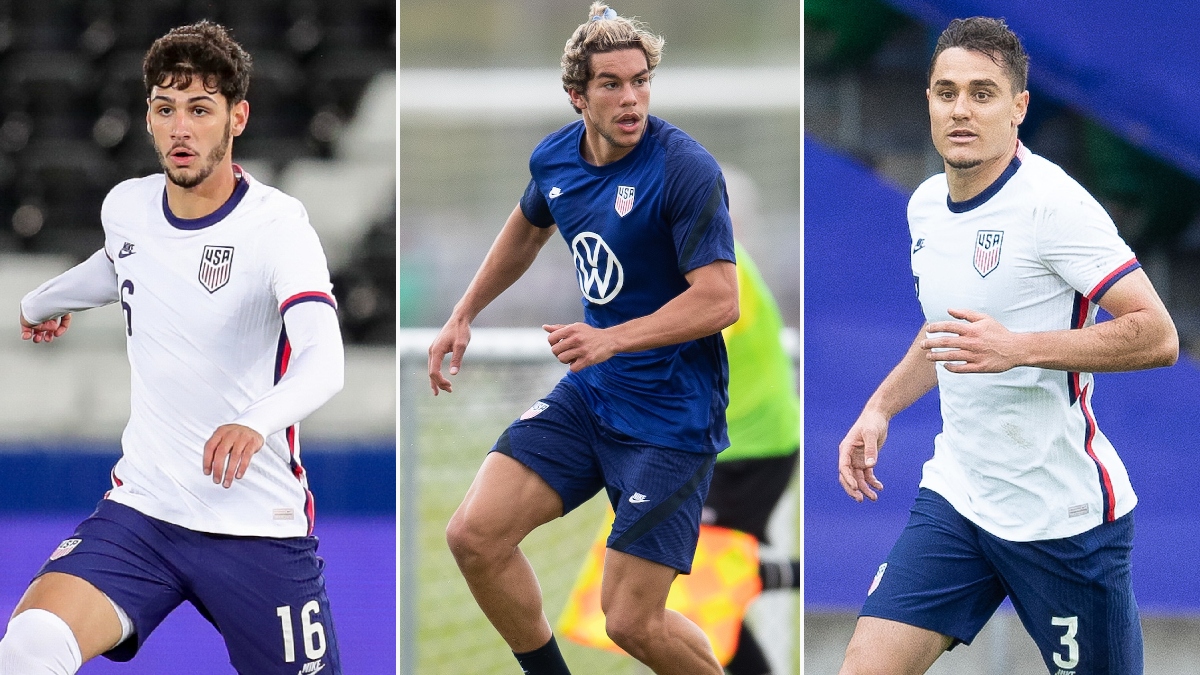 The December U.S. men’s national team camp has kicked off in California in relatively quiet fashion, tucked under the shadow of the looming MLS Cup final and the UEFA Champions League proceedings over in Europe. Concacaf World Cup qualifying doesn’t resume for almost two months, so there’s no sense of urgency surrounding this camp, but that doesn’t mean there aren’t some serious questions to be answered.

Gregg Berhalter has called in an interesting mix of talent into the December camp, with the roster ranging from establish veterans, a few regular starters, and a crop of teenagers appear more suited to help the U.S. Under-20 men’s national team than the USMNT.

As young as some of the camp’s more intriguing prospects are, none should be written off considering how many teenagers have broken through with the USMNT in the past year. A year ago, very few would have pegged Ricardo Pepi to be starting at striker for the full-strength team, and one year ago Joe Scally was waiting for his chance to earn first-team minutes and look at him now, a Bundesliga regular.

So what are some of the biggest questions to be answered by this December USMNT camp? Here are some to keep an eye on:

Will Long and Morris be ready for qualifiers?

Aaron Long and Jordan Morris were regular USMNT starters before the COVID-19 pandemic began, and both were sidelined by long-term injuries in the first half of 2021, before they would have been expected to return to their regular roles.

The January/February qualifiers are almost two months away, but a lack of regular playing time in the coming weeks will make their recoveries tougher to complete, at least to the level where they could be viable options to challenge the current players at their positions.

Morris is further along, having returned for the tail end of the MLS season. Long has yet to play a minute of soccer since tearing his Achilles in May, and he is probably a more realistic challenger to try and be part of the March qualifiers.

Berhalter has the luxury of being more patient with Long given the central defender options he has at the moment with Walker Zimmerman and Miles Robinson stepping up, and John Brooks waiting in the wings for a return. Chris Richards had propelled himself into the conversation, and is a candidate to start in January if he is back to a regular starting role for Hoffenheim.

Morris is a better candidate to break into the January qualifying roster, but he too will be facing some serious competition, especially if Christian Pulisic and Tim Weah are healthy and playing regularly, and Gio Reyna makes a complete recovery from his lengthy layoff. They, along with Brenden Aaronson, give the USMNT some good wing options, but if Morris can make a statement with his form in December, Berhalter might start considering which of the aforementioned wing threats could be better served by a move into a central role.

How good are the young left backs?

The left back position is in need of some depth, with Antonee Robinson the clear first-choice option and a steep drop below him to the likes of Sam Vines and George Bello. A difficult showing in World Cup qualifying dented Bello’s stock after his promising showing at the Gold Cup, making this camp a particularly important one for the Atlanta United fullback to show he is clearly the best of a young crop of options at the position.

Kevin Paredes is coming off a breakout season for D.C. United and while he may be much more developed as an attacker than defender at this point in his career, he has enough quality going forward to make him an intriguing option.

Then you have Jonathan Gomez, a teenage dual national with a looming move to Real Sociedad on the horizon. Gomez is an elite left back prospect, and as much as this camp is his chance to show how he stacks up next to Bello and Paredes, it is also an important camp to show Gomez that he should follow Ricardo Pepi’s lead and choose to play for the United States rather than Mexico.

Can Berhalter find a defensive midfielder?

You never have enough defensive midfield prospects, especially when your top option is Tyler Adams, who has stayed healthy lately but has been known to take knocks that cost him time. Right now Kellyn Acosta is Berhalter’s leading backup to Adams, but there is definitely some room to jump in behind that tandem.

Jackson Yueill has been in that position before, and USMNT fans will remember him being far from impressive in his last go-round with the national team. Berhalter has seen Yueill perform much better than did in the summer, which is why the San Jose Earthquakes midfielder is being given another look. If Yueill doesn’t step up and make the most of this chance, it could be the last one he gets with the USMNT.

Then we have Johnny Cardoso, the Brazilian-based midfielder who has shown some promising flashes in his limited appearances in a USA uniform, both for the USMNT and U.S. Under-23 men’s national team. The 20-year-old is an excellent distributor from the deep-lying role, but he also brings some bite to the position.

There aren’t two more enticing young prospects in the December camp than Caden Clark and Cade Cowell, who have been showing serious promise since the start of the year.

Clark’s season was a bit of a roller-coaster ride, as he was sidelined in the middle of the season and lost his starting place before earning it back late in the year. Clark is set to join RB Leipzig in January, a move sealed back at the start of the year when his stock was at its peak. Now, with Jesse Marsch out as RB Leipzig manager, Clark’s status at the Bundesliga side is in question.

The December camp should give Clark a chance to not only sharpen his game before heading to Germany, but also a chance to show Berhalter he is someone to consider in his plans down the road. Berhalter’s increased emphasis on the pressing game in his setup bodes well for Clark, and if the youngster can find his footing at Leipzig and secure a first-team place, then a USMNT return could come sooner than later.

Cowell’s 2021 got off to a red-hot start, and through the season he kept showing the potential to be a dangerous goal threat. He could theoretically play anywhere along the front three, though his hold-up play would need some work to really challenge in the lead striker role.

Cowell is also eligible to play for Mexico, and while he hasn’t been as vocal about weighing his options as some other prospects have been, you have to think his dual-national status is being factored into the equation when it comes to his current USMNT involvement.

Consistency was the big issue for both youngsters in 2021, but that’s normal for young players. The good news for both is that Berhalter won’t be rushing them along and they should have the time to settle in and impress, and even if they can’t break through into full USMNT roles soon, they should both have parts to play in the important Under-20 setup in 2022.

Can Lennon and Reynolds challenge at RB?

Right back is a position with a fair number of options for the USMNT at the moment, from Sergiño Dest to DeAndre Yedlin, Reggie Cannon to Shaq Moore, but you can never have enough options and there are some dynamic ones who should earn a longer look in this camp.

Bryan Reynolds has been in with the USMNT before, and there is no denying the potential the former FC Dallas fullback has. He isn’t earning much playing time at AS Roma, which shouldn’t really be a surprise, but a likely loan move in January will hopefully help him start earning some consistent minutes to continue his development.

Lennon is a converted winger who has settled into a fullback/wingback role in recent years. Atlanta United has gotten in the way of him joining some USMNT camps in the past, but this camp should offer him a great chance to show Berhalter he can serve as a sort of hybrid fullback/winger option. Originally a winger, Lennon has worked on improving the defensive side of his game and this camp will show he far that part of his game has come. There aren’t many pure wingers on the December camp roster either, so Lennon could also see some time there.