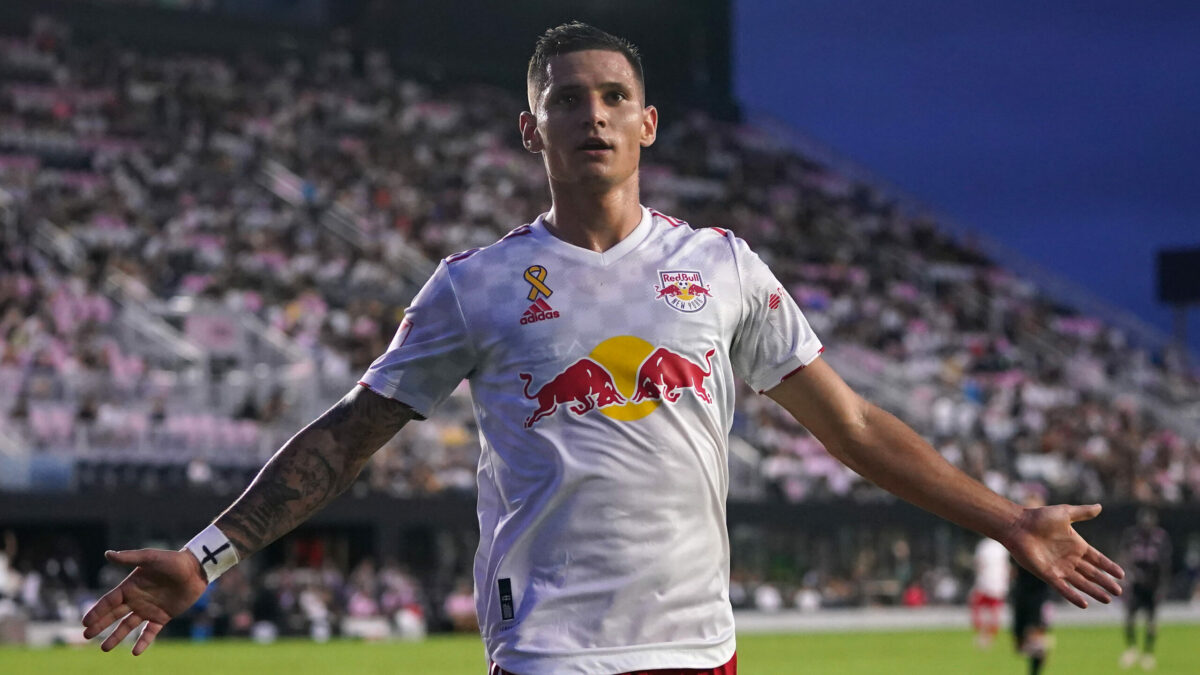 Gerhard Struber’s first full season in charge of the New York Red Bulls concluded with there being a real sense that the team was heading in a good direction, ready to springboard into the upper tier of Major League Soccer and try to keep up with their newly-crowned neighbors on the other side of the Hudson River.

That optimistic feeling has faded though, with a lackluster offseason leaving the Red Bulls looking destined to take a step back, and at the very best, remain in its position as a second-tier team in the Eastern Conference, destined to have to fight just to reach the playoffs.

If there were still some fans living in denial about the team’s prospects heading 2022, Struber splashed some cold water on unrealistic expectations on Tuesday when he did his best to make it clear the upcoming season would not be one to be thinking about the team winning its first MLS Cup.

“I hope in the end that we have a set up in the next few weeks that we are ready to speak one more time about our goals, but right now I have to be fair in every direction and honest also with our fans,” Struber said. “I see always the glass half-full, and I am a big optimistic man and coach. But I’ve always been fair with my environment and with my players and I think I’m realistic, man. I am not a dreamer. When everything go in the right direction, we make the right progress the next two weeks, then I think we are interesting team, but this needs time.

“Right now we’re very, very young, without many experienced players,” Struber said. “This is the situation. I have to manage that. I have a big trust in my players that we progress in the next two weeks. But this needs time.”

The Red Bulls lost some major pieces to the squad that rallied to earn a postseason berth with a strong final two months of the 2021 season, perhaps none more important than captain and midfield anchor Sean Davis, who passed on more money to stay with the Red Bulls in order to join Nashville SC.

Gone too is Brazilian striker Fabio, whose loan ended with no deal to keep him at Red Bull Arena in place. Kyle Duncan played out his contract and bolted to Europe while Andrew Gutman was another loanee who was recalled rather than staying in New Jersey.

The Red Bulls also parted ways with long-time forward Daniel Royer, who never fit well in Struber’s plans and endured a forgettable 2021 season on his way out the door.

There have been some promising attacking pieces brought in, led by Brazilian playmaker Luquinhas and former Inter Miami winger Lewis Morgan. The arrival of Luquinhas should allow Patryk Klimala to focus on filling the lead forward role, while Morgan steps in to give Struber a dynamic wing threat after an impressive 2021 season as one of the few bright spots for Inter Miami.

The Red Bulls’ success will also hinge in large part on the return of two players, one who had been expected to leave for good this winter, and one who missed the second half of last season. Caden Clark’s transfer to RB Leipzig quickly turned into a loan back to the Red Bulls for the 2022 season, giving the young talent a chance to rebound from a roller coaster of a 2021 season, while Aaron Long is back from a torn Achilles and has been named captain heading into the new campaign.

The Red Bulls will continue to be a tough team to play against, with their high-pressing style sure to overwhelm weaker teams and frustrate better teams, but the team’s overall inexperience could make for a season where growing pains hamper the early going, while a lack of depth could doom the team over the course of a long MLS season.

The Red Bulls have been in search of a pure playmaker ever since Kaku left the team abruptly — and some would argue even he didn’t really fill the bill during his time at the club — and the hope is that Luquinhas can be that creative force in the midfield.

The 25-year-old was a standout for Polish side Legia Warsaw, helping the club win a pair of Polish League titles during his tenure there, and while he is capable of operating as a winger, Luquinhas is more likely to operate in a central role while Caden Clark and Lewis Morgan take the lead on the flanks.

The Pressure is On: Cristian Casseres Jr.

The Venezuelan midfielder has been one of the most underrated players in MLS for some time, and his shift into more of an attacking role in 2021 showed off his versatility. As good as Casseres has been though, the Red Bulls will need more from him, particularly in the leadership department, despite him still being just 22.

“Christian makes the team better in many positions and this is my big advantage that I can use him in more positions and and he is right now very flexible and has a versatility to come in more positions at a very high level,” Struber said. “He has to take more responsibility, more leadership. He’s a national player, and also he must make the next step to be a leader in the team. He is young, but we need every every single player with more than 40 or 50 games in MLS to take the responsibility, to take the duty to help the young boys and and he is one of the most experienced player in our team and he’s a national player and I expect from him in many directions a big step in the season.”

A return to a central-midfield role seems likely for Casseres given the makeup of the roster, and that move isn’t a bad thing considering that is his natural and arguably best position.

The 2021 season at Red Bull Arena was one marked by overachievement, as the Red Bulls overcame the loss of Aaron Long and the abrupt departure of Kaku to put together a still-promising campaign complete with a playoff run and some memorable victories against rival NYCFC.

Struber appeared to validate the belief that he was a head coach capable of shaping a winner, and instilling a successful culture, but a subpar offseason of roster revamping pumped the brakes on the wave of optimism that followed last season.

Long’s return is major, not only because he is one of the best centerbacks in MLS, but also because his leadership is desperately needed in a locker room that will sorely miss Sean Davis. Unfortunately for the Red Bulls, a freak offseason injury has cost them the services of Colombian defender Andres Reyes until July, meaning defensive depth isn’t a luxury the team possesses.

It also likely means Struber will need to revert to a four-man defensive setup after finishing 2021 playing with three central defenders and wingbacks. Kyle Duncan and Andrew Gutman are gone, but there are replacements. Tom Edwards is back, and will help offset the departure of Duncan while giving Struber some versatility, and John Tolkin will be called on to continue improving after showing some glimpses in 2021.

The midfield should be an area of strength, particularly if Casseres Jr. returns to his natural central midfield role. a Casseres-Frankie Amaya tandem would be one of the best young pairings in MLS, and they should provide the work rate to support new signing Luquinhas, or Klimala when he is deployed in midfield.

Clark’s return should be a big boost as well, especially if he can find and maintain his best form after an up-and-down season that included a stint on the bench. The teenager is a game-changing threat when he’s at his best, and after having his Bundesliga dream put on hold, Clark should have plenty of motivation to post a big season.

Fabio’s departure is a painful one, because the big Brazilian showed some real signs of potentially being a quality striker. The good news for the Red Bulls is Klimala is a natural striker and should hold down the role, with the potential to be an elite goal-scorer in MLS.

Overall, the pieces are in place to field a playoff-caliber team, but a serious lack of depth makes the Red Bulls vulnerable if injuries become an issue. Given the talent level level, and inexperience, the Red Bulls have the look of a team that should aim to reach the postseason, but expecting much more would be stretching it unless the team makes more roster additions.