Chicharito’s advice to Douglas Costa after quiet debut: ‘Be patient’ 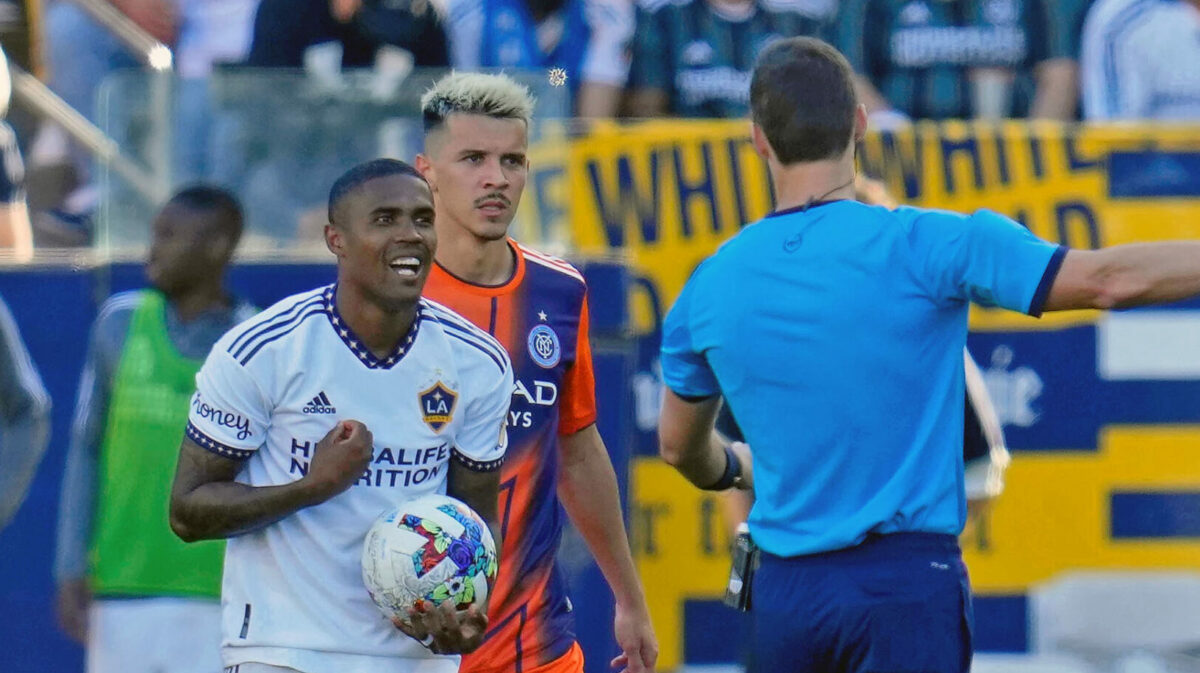 The Los Angeles Galaxy made a statement in the first match of the season, with Mexican star striker Javier “Chicharito” Hernandez nabbing three points with a 90th-minute winning goal. The Galaxy defeated defending MLS Cup champions New York City FC Sunday in one of the league’s marquee opening day matchups, setting the stage for what the Western Conference club hopes is a major bounce-back campaign.

However, new signing Douglas Costa struggled on the right wing in his Galaxy debut. Costa, a 31-year-old who made his career playing for Bayern Munich and Juventus, joined the Galaxy this offseason from Brazilian club Gremio as one of the biggest names to enter the league.

Costa became a regular starter in top European leagues because of his blistering speed and crossing ability, but he did make much of a first impression Sunday. He had two shots on target, but was subbed out of the game after 67 minutes. He picked up a yellow card in the 41st minute, committed four fouls and won one duel.

Looking back on Costa’s debut, Chicharito told reporters Costa needs time to get used to playing in MLS.

“Be patient,” Hernandez said when asked what advice he’d impart to Costa. “It takes time. Sometimes people are expecting since day one, on the first second, you’re going to prove everything and that’s very rare to happen in life, in any job. It takes time, so being patient is the most important thing, because sometimes if you listen to the (noise) and everything that is outside of yourself and you believe that, it’s going to create more frustration, more desperation.”

Hernandez would know plenty about adjusting to MLS. He arrived to the Galaxy in 2020 and struggled greatly. He scored two goals in 12 appearances in an injury-affected first season with the Galaxy. Everything changed the following year, though. Hernandez scored 17 goals in 2021 and has now started 2022 with a game-winner in his first match.

“It was his first match, first time in the stadium, the environment,” Vanney said. “It’s managing a little bit of those things. Collectively, just connecting with the guys and understanding. For us, as a group, it was maybe not our best day with the ball. This week there were some things we talked about clearing up, which will both help him. For him, it’s repeatability, it’s getting his legs under him, being able to play at the speed and the capacity that he wants to and that he’s capable of and that the game demands for 90 minutes and being able to repeat, repeat, repeat the things he’s capable of doing.

“It’s, for us, also to understand ways that we can create space for him, create advantageous situations, give him the scenarios that are going to best suit him to create opportunities for us and himself. So those are things that are evolving with this group and we continue to work from session to session, week to week.”

The Galaxy narrowly missed the playoffs last season. Vanney has started his second year as coach positively, overseeing the move of free-agent signing Raheem Edwards to left back, the continuing improvement of Mexican right back Julian Araujo and additions of new starters in Costa and Mark Delgado.

The Galaxy will move on to face Charlotte FC on Saturday at Bank of America Stadium, which will be the expansion side’s first home match in its history. The Galaxy will also have the challenge of playing three of the next four matches on turf.

“It’s fantastic for the game for a new franchise to come into our league and have so many fans show up to the first one,” Vanney said. “For us, it’s about managing that emotion and the excitement they’re going to have at the beginning for sure.”