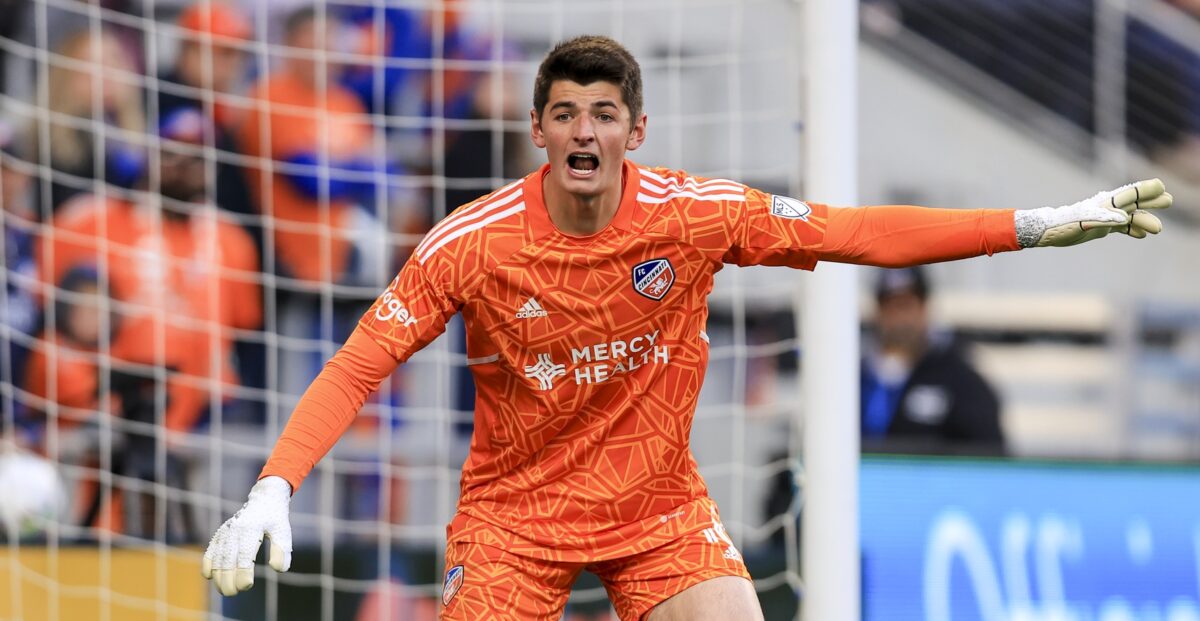 FC Cincinnati is enjoying a promising start to the 2022 MLS season, the most successful start in the team’s relatively brief MLS history, and one of the team’s youngest players is a key figure in what feels like a turnaround for the Ohio club.

Rookie goalkeeper Roman Celentano is thriving in a starting role for FC Cincinnati, thrust into the job due to injuries, and his turn in goal has coincided with the team’s encouraging start to the campaign, which has Cincinnati sitting in a playoff position after three seasons as the worst team in MLS.

The Naperville, Illinois native was a known talent in the 2022 draft, but getting his shot as a starter was far from guaranteed. At the moment, the selection of Celenatano was overshadowed by Cincinnati’s overhaul that included installing GM Chris Albright and head coach Pat Noonan and their looming judgment day when the season opened up.

“I really wasn’t expecting much from the first year,” Celentano told SBI. ” I was just hoping to get some MLS NEXT Pro games and just work my way into the team and just get used to the environment and everything…

“Anything can happen in soccer, like, you’ll see three or four-string guys playing just because of injuries or red cards. I know it’s a long season and stuff like that can happen. So I just tried my best to stay ready for that,”

Apart from some flashes from Frankie Amaya in 2019, FC Cincinnati fans had not exactly been wooed by or seen an instant impact from a draft pick, and heading into 2022 were probably satisfied with the acquisition of 31-year-old veteran Alec Kann serving as a sensible starter for the season. Kenneth Vermeer lost favor with the fanbase last year but was still a serviceable backup, and Celentano looked destined to be in the wings as a developmental piece of the goalkeeping corps or pushing Vermeer for the backup spot.

Kann was injured against Atlanta United on April 16 and is out for the foreseeable future. FC Cincinnati had to play high-flying LAFC on the road on April 24. The same LAFC side that Vermeer, who hadn’t seen a minute of action in the season, could have reasonably been given a chance and spared Celentano’s debut for another day that wouldn’t have been so chaotic.

Noonan made the call to throw his rookie in, with only one U.S. Open Cup and two MLS NEXT Pro starts to his professional resume.

“You could see that very early on in the preseason before he ever got a match, he was a confident goalkeeper that had good demeanor and good character,” Noonan told SBI. “And, if he was thrown into it he was going to be okay,”

Celentano was not the only one playing out of necessity and came away with a respectable performance despite a 2-1 loss. Especially considering LAFC is averaging exactly two goals per game, which is second-best in all of MLS.

Since then, Celentano has put together a string of six starts and his performances have been key in collecting a four-game winning streak which is a club record in its MLS era.

“I’m more confident but it’s like, alright, now I’m in this team with FC Cincinnati, but now I want to reach higher,” Celentano said. “You’re never there. You always want to keep pushing, keep striving for the next level.

“It was make it to college (then) make it to pro. Now let’s see what I can do. Whatever I can make in this game I’m going to try to,”

Like any rookie season, Celentano’s emergence into the MLS scene will offer a thrilling series of firsts, and his biggest performance to date arguably came on May 14 against the Chicago Fire where his four saves helped cement the record-winning streak.

Everyone from his friends and family to U.S. men’s national team head coach Gregg Berhalter was in attendance seeing him play as a pro in his home market for the very first time (though in fairness, Berhalter lives in Chicago and was getting a chance to see hotshot prospect Gabriel Slonina in goal for the Fire).

“I didn’t know (Berhalter) was at the game until after, but he wasn’t there for me at the moment so that’s really nothing to think about, honestly. But having my family there was a great moment and it was great to see everyone after the game …” Celentano said. “A lot of people came out, so it was a great moment for me. But before, I just wasn’t trying to think about that. I was trying to focus on me and not letting it get to me, not stress in the moment, go get the result, and we did,”

As far as Celentano’s origin story goes, he, like most midwestern kids, found his love for soccer after watching the 2010 World Cup, picking up the game shortly after being hooked on the sport while watching the U.S. men’s national team’s run to the Round of 16.

“I just thought like the whole spectacle and everything was like incredible,” Celentano said of watching the 2010 World Cup. “Seeing the USMNT, and just everything that happened in that tournament. I thought it was amazing, so right after that I started playing soccer getting into it and stuck with it and started to fight off the other sports just focus on goalkeeping in specific because I was good with my hands playing football and baseball and stuff, I just liked dodging around and stopping shots,

“And then just from there, Petr Cech was my guy,” Celentano said. “I’m a Chelsea fan, so he’s like the reason I wanted to be a goalkeeper because I thought he was sick with the helmet and everything. Until he went to Arsenal. And after that, it’s been Kasper Schmeichel I’ve been looking up to since. But there’s so many guys even in the league like (Matt) Turner and Andre Blake, those are some guys I look up to,”

Celentano still has a long way to go before he can make the transition from admiring the best goalkeepers in MLS to being one of them, but the young netminder has enjoyed an encouraging start to his career.

“There’s still things that we need to improve on with decision making,” Noonan said. “But I think you can see he’s good composure and he’s got a bright future.”