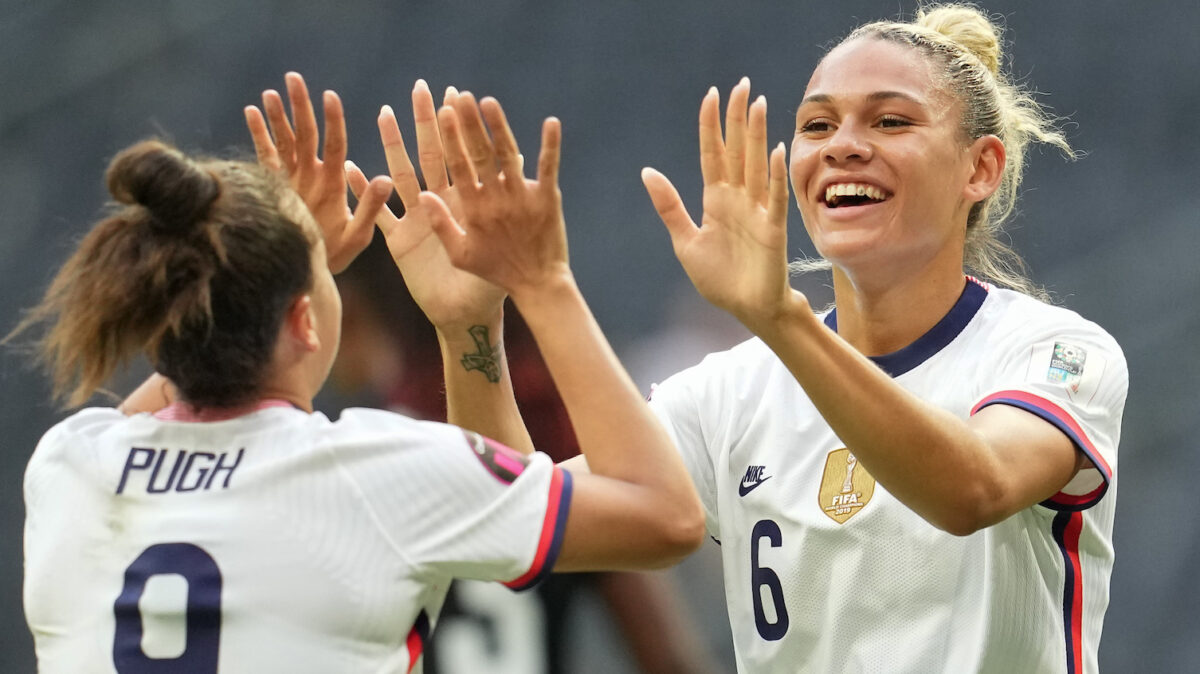 The U.S. women’s national team clinched its berth into the 2023 FIFA Women’s World Cup after earning a second-straight qualifying win on Thursday night.

Sophia Smith scored twice in the opening eight minutes for the Americans while three different players also added goals in a 5-0 group stage victory over Jamaica at the Concacaf W Championship. It was the second-consecutive shutout win for Vlatko Andonovski’s side, which has now outscored their competition 8-0 in two matches.

Smith needed only three minutes to break the deadlock for the USWNT, picking up a pass from Naomi Girma and rifling a right-footed shot into the bottom-left corner. It was Smith’s first goal of the tournament.

After opening the scoring with her right foot, Smith doubled her tally and the Americans advantage in the eight minute, this time drilling a Sofia Huerta assist down the middle of Rebecca Spencer’s goal. It was Smith’s second multi-goal performance for the USWNT in the past three weeks.

Spencer made four additional saves in the first half and had help from the crossbar to keep the deficit at only 2-0 for Jamaica.

Rose Lavelle extended the USWNT’s lead to 3-0 in the 59th minute, getting on the end of Ashley Sanchez’s cross before hitting a low drive into the bottom-right corner.

The USWNT continued to keep the pressure on late in the second half and would add an additional pair of goals in the final seven minutes. Kristie Mewis stepped up to score from the penalty spot in the 83rd minute after Margaret Purce was hacked down by Paige Bailey-Gayle.

Trinity Rodman also came off of the bench to score her first World Cup Qualifying goal, capping a dominant evening for the USWNT with a 5-0 scoreline.

Alyssa Naeher made two saves to preserve the Americans second shutout of the group stage and move them on the verge of advancing to the tournament semifinals. Following Mexico’s 3-0 loss to Haiti later on Thursday night, the USWNT clinched a berth into the knockout stage.

The USWNT will close out group stage play on Monday against Mexico, aiming to stay perfect in the competition.