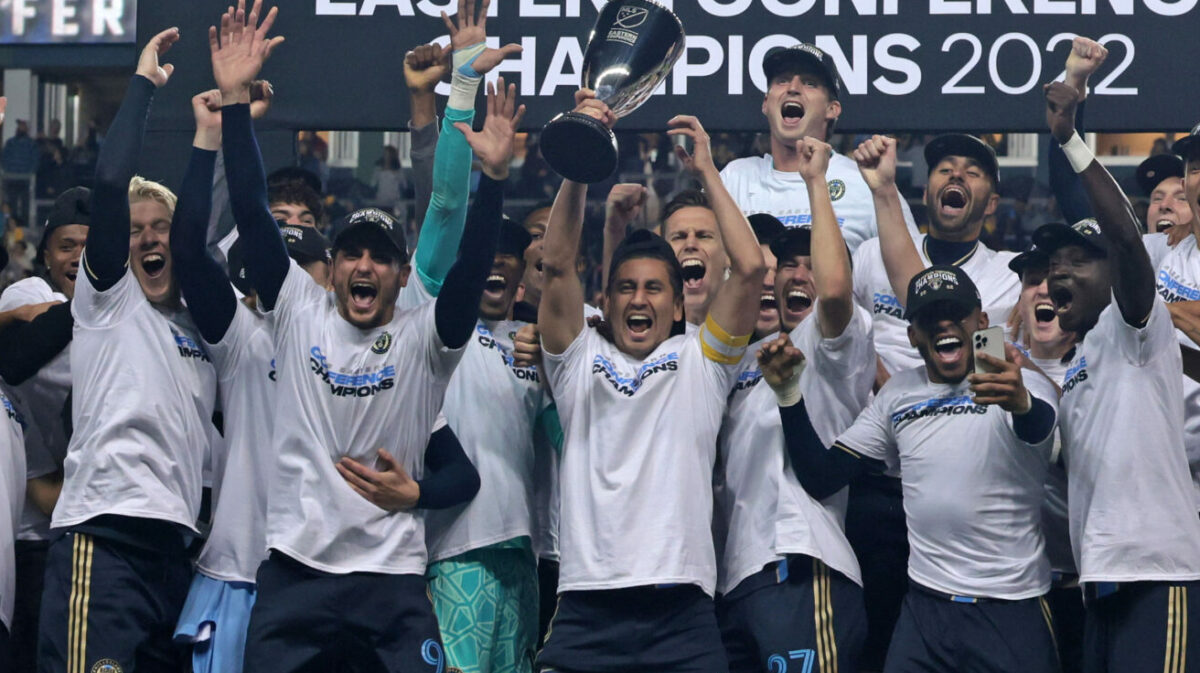 CHESTER, Pa. — The Philadelphia Union were in an unfamiliar situation during the early stages of the second half in Sunday’s Eastern Conference Final against New York City FC, but responded in a heroic fashion to book their first-ever MLS Cup berth.

Sunday’s 3-1 comeback victory over the reigning MLS Cup champions etched a new memory into the Union’s history books, as 19,770 fans witnessed one of the best moments in modern-day league history. After falling one match short of reaching MLS Cup in 2021, the Union scored three goals in an 11-minute span to take a lead they wouldn’t relinquish at Subaru Park.

“What a team,” Union head coach Jim Curtin said postmatch to media. “An incredible group of guys who have a belief and a fight that won’t be denied. It’s an amazing night, the biggest win in our club’s history. A real thank you to the fans who, even when we went down a goal, stayed loud, stayed with us, and never doubted us.”

“We have shown on multiple occasions that we are tough to beat over 90 minutes and tonight was another example of that,” midfielder Leon Flach told SBI postmatch. “We had been in tough situations before, but tonight was one of the best matches I have ever been a part of. The fans were amazing, and I have never heard this place as loud as it was tonight. We couldn’t have done this without them all season.”

Maxi Moralez’s smooth stroke in the 57th minute sucked the air out of Subaru Park as Nick Cushing’s side cut through the Union and delivered the opening goal of the match. Andre Blake’s stellar save in the 60th minute denied veteran defender Alexander Callens from doubling NYCFC’s lead and from putting the Union under serious pressure from advancing.

It was Blake’s save that helped the Union respond and eventually take control of the match and scoreline.

“I still don’t understand how people don’t think he isn’t the MVP of the league,” Kai Wagner told SBI. “Andre has saved us several times this season and that save was crucial in us advancing tonight. If he doesn’t make that save, we are looking at being down 2-0, but instead it stayed 1-0 and we responded. Sometimes you need that to wake you up.”

Julian Carranza’s low finish in the 65th minute helped the Union equalize before the Argentine’s header helped set up Daniel Gazdag for the go-ahead goal two minutes later. The Union rallied to take their advantage and used a powerful, never-say-die finish from substitute Cory Burke in the 76th minute to cap off a memorable comeback.

It was the latest example of the Union’s willingness to fight for one another and until the final whistle. Following the painful elimination at the hands of NYCFC in 2021, the Union responded with one of their best performances of the year, sealing a trip to Los Angeles for the first All-No. 1 seed MLS Cup since 2003.

“It’s human nature to have that sinking feeling. It’s natural,” Curtin said. “I can lie and say I knew we were going to come back, but that’s not the case. When you concede like that and the place goes quiet, it hurts…. The crowd immediately got back behind us.”

“We needed everyone tonight and we got that,” Flach said. “You saw when Jack [McGlynn] came in and helped set up the second goal, Cory came off the bench and scored the third. We have all worked together for the good of the team this season and I am very glad that we all get this new opportunity to bring a trophy home to our fans. It’s going to be a great day for the club.”

Despite the unknown status of captain Alejandro Bedoya following his exit at halftime, the Union will be brimming with confidence ahead of Saturday’s showdown with Western Conference champions, LAFC. The Union have tied LAFC in three of their four all-time meetings, including thrilling 3-3 and 2-2 scorelines at Banc of California Stadium in 2020 and 2022 respectively.

The Union finished top of the league in terms of goals scored (72) and fewest goals conceded (26) during the regular season while LAFC was closely behind them in the top three of each category (66 goals scored, 38 goals allowed). It will be the toughest opponent that the Union have played in 2022, but Curtin and his players aren’t backing down from the challenging of upsetting one of the best all-time squad in recent league history.

“Finals are hard to get to, no matter what competition it is,” Curtin said. “We’re going to go on the road and play an LAFC said that is probably one of the best in our league’s history, but we have proven over the years that we can play with anyone. Tonight is a great achievement for our club, but we still have work to do.”

“Of course we would love to have LAFC come to Subaru Park, but we just have to show everyone that we can beat them on the road,” Wagner said. “It’s the last game of the season so we need to lay it all on the field and show the same belief that we did today.”