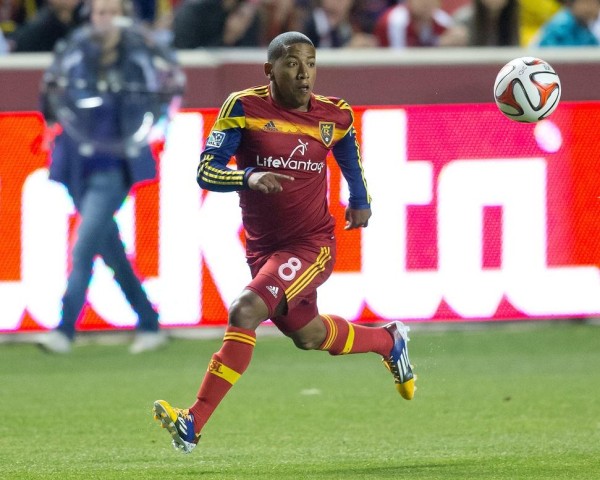 RSL strolled to a 2-0 victory over Chivas USA at Rio Tinto Stadium thanks to goals from forward Alvaro Saborio and midfielder Kyle Beckerman, with Chivas USA finishing the match with ten men due to a silly red card from Marvin Chavez. It was the third-straight shutout for RSL as they wrapped up their regular-season schedule.

“It feels great,” RSL head coach Jeff Cassar said following the match. “Obviously we’re extremely blessed to have such an incredible group of men in that locker room. As far as the staff, we came together quickly; that started in the preseason. It’s a great group to work with. We are all passionate about the team. But we still all have a lot of work to do and that is exciting. It’s a credit to the guys in the locker room; to the core group of that have been here for a while.”

RSL had already secured the opening goal in the 36th minute via a penalty kick after Saborio was taken down in the box by Bobby Burling during a free kick. Saborio took his penalty well, rifling a shot to the left, not showing any hesitation to give his squad a 1-0 lead with his eighth goal of the year.

Chivas USA were then reduced to ten men early in the second half thanks to a mind-numbing decision from Chavez.

The Honduran international dispossessed RSL defender Tony Beltran and began to streak down the touchline but was unable to control the ball. The assistant referee raised his flag to indicate the ball had gone over the line when Chavez decided to voice his dissension. Chavez, who was rather upset with the call, kicked it straight at the sideline ref before promptly being shown a red card in the 56th minute.

The hosts doubled the lead in the 74th minute thanks to a clever pass from forward Joao Plata and a cool finish from Beckerman. It was Beckerman’s third goal of the season.

“We scored. Seriously,” defender Chris Wingert said when asked about the difference between this match and the last two against Chivas USA. “I know it sounds silly and I’m not trying to be sarcastic, but that’s the name of the game. You have to bury teams when you have them on the ropes. Even though I would say this game we had a ton of chances.

“Last game, even though we had like 70 or 75 percent possession, we didn’t have a lot of clear cut chances. (This) game we did. We didn’t score right away, but we kept getting after it and then buried one, and keep pushing, keep pushing and eventually buried another. Still maybe not as good as we like, but a little better job of limiting their chances and their counter attacks.”

“I’ll definitely be in front of the TV, scouting, preparing,” Cassar said when asked what he would be doing on Saturday. “I’m going to be preparing for two teams, Vancouver and Portland and then we’ll see where it goes from there. It’s definitely not time to sit on the couch and relax. I’ll be taking notes and preparing. Not rooting for anything. I’m just going to prepare my team the best that I can.”