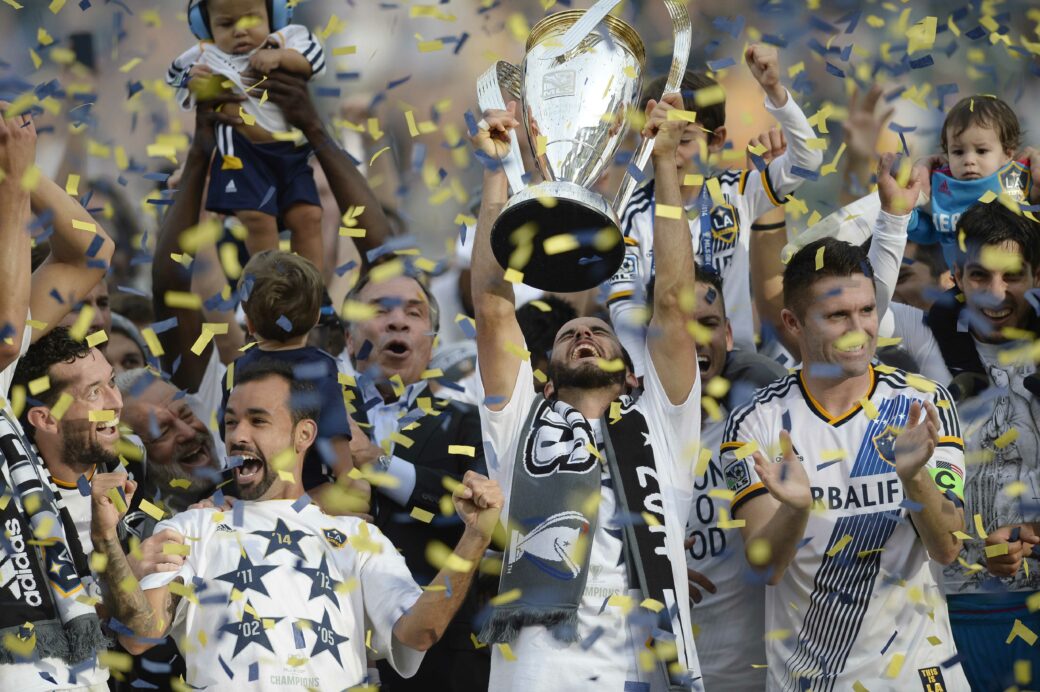 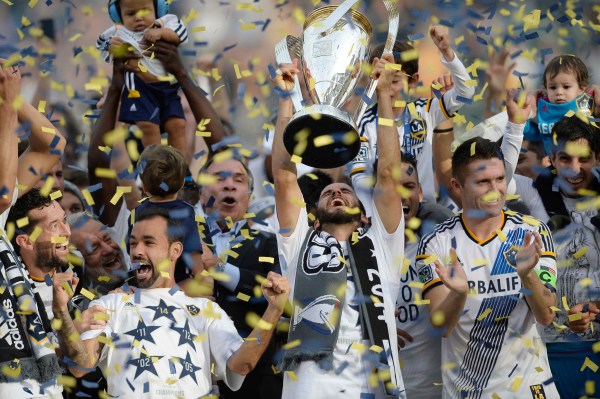 CARSON, Calif. – Landon Donovan is going out on top, and the LA Galaxy are champions once again.

In a replay of the 2002 and 2005 MLS Cups, the New England Revolution and LA Galaxy played into extra time to decide the 2014 champion on Sunday. Following the same script, the Galaxy came away triumphant, 2-1, at StubHub Center to claim their record fifth MLS Cup and third title in four years.

The winner came in the 21st minute of extra time, when Galaxy captain Robbie Keane broke loose behind the New England defense on a long ball from Marcelo Sarvas and tucked home the winner past sprawling New England goalkeeper Bobby Shuttleworth. For his efforts, Keane was awarded the MLS Cup MVP.

The Galaxy drew first blood in the 52nd minute, when Gyasi Zardes pulled down a deflected Stefan Ishizaki cross inside the New England goal area, held off two defenders while taking two touches to control the ball, then slammed a shot far post low to beat Shuttleworth.

New England answered with the equalizer in the 79th minute, when a lapse in the Galaxy central defense gave another unexpected hero, Chris Tierney, a clean look at goal. Tierney poked the ball past Galaxy goalkeeper Jaime Penedo, silencing the sold-out crowd of 27,000.

The Galaxy seemed to have taken control of the match opening the scoring, as New England could not manage any touches in the final third until Tierney’s goal. However, it was the Revolution who threatened late but could not find the winner before extra time.

Lee Nguyen was even knocked over in the penalty area late in the game, but referee Mark Geiger allowed play to continue. The Revolution also came close on a play that saw a Teal Bunbury chip denied by the woodwork.

“The penalty there, it was close” said Heaps. “Teal hitting the crossbar, it was close. It was late in the game, you know, it’s unfortunate.  Those are the ones that decide.”

Extra time featured a chorus of whistles from Geiger, which allowed little flow to the affair.

When the final whistle blew, players on both sides collapsed in exhaustion.

“At the end of the game, I just laid there and sobbed a little bit,” said Galaxy defender A.J. De La Garza in the jubilant Galaxy locker room. “A lot of emotions right now, the year we’ve all been through, it’s been crazy. But there’s no better way to go out than winning a championship at home in front of your own fans.”

For New England, the frustration continues. The club has now lost in all five of its MLS Cup appearances.

The loss of Nguyen to cramps at the end of regulation contributed Sunday’s loss, as it forced Jones to play higher in an effort to manufacture offense from the central attacking midfielder spot.

“I thought we had them,” said Heaps. “I’m proud of our guys. There’s a real competitiveness in there, a real willingness to lay it all on the line.  I thought we were the aggressor today a lot of the time.  No one really gave us a chance today, and our guys rallied around that.”

Added Arena: “You got to give New England a lot of credit. They came in here with a plan. That Jermaine Jones is a real leader. It was a good battle, maybe not the greatest game, but there was some drama involved, and that’s good as well.”

For the Galaxy, the script went almost as well as they could have dreamed. They say goodbye to Donovan, who is now heading into retirement, with another MLS Cup trophy in tow.

“There is no experience like what just happened,” said Donovan. “… I can’t imagine that anything can replace that.”