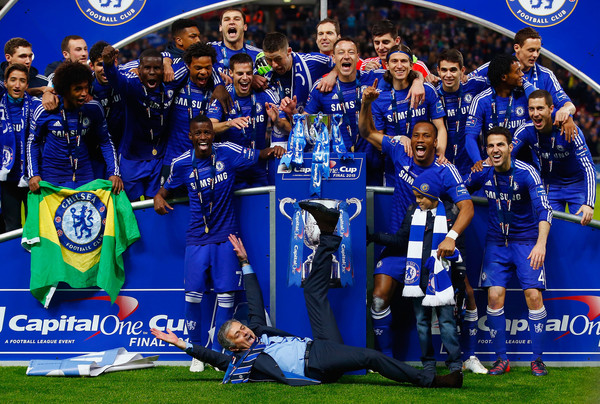 With eyes still fixed on Champions League and Premier League successes, Chelsea have claimed the club’s first trophy of the 2014-15 campaign.

For the first time since 2007, Chelsea lifted the Capital One Cup on Sunday by defeating Tottenham 2-0 in the final.

Both sides created chances, but the Blues were able to capitalize as their defense also stood firm throughout the 90 minutes.

John Terry scored on the brink of halftime when Willian’s free kick was taken down by Kurt Zouma for Terry to bury home through traffic. Diego Costa would finish the job when Cesc Fabregas located him inside the area before he dribbled into a tight angle but still sliced the ball home past Hugo Lloris.

In La Liga, Real Madrid was unable to protect a 1-0 lead earned through a Cristiano Ronaldo penalty as Gerard Moreno equalized with a dart into the bottom far corner from outside the 18. With the result, Real Madrid only sits two points ahead of Barcelona atop the table.

Here is an overall look at this weekend’s action throughout Europe’s top leagues:

Just three days after suffering a major setback in the Europa League, Liverpool rebounded with a major triumph in domestic competition.

Liverpool defeated Manchester City, 2-1, through goals from Jordan Henderson and Phillippe Coutinho – two of the players who were missing in the Round of 32 second-leg match in Istanbul on Thursday. City’s only goal arrived in the first half to equalize the score through Edin Dzeko.

Arsenal also bounced back from their midweek Champions League loss against Monaco by blanking Everton, a team that is soaring in Europe after defeating Basel 7-2 on aggregate.

Mesut Ozil stole the show with two assists with the first arriving off of a corner when Olivier Giroud volleyed home from inside the area. The second goal came in the second half when Tomas Rosicky controlled a pass from the German international before firing home from roughly 20 yards out.

Here are all of the results from this weekend’s Premier League action:

With this weekend’s results, Barcelona continues to close in on first-place Real Madrid.

Barcelona edged closer to league-leading Real Madrid with their 3-1 victory at Granada. Ivan Rakitic scored from inside the six-yard box to finish off the cross from Luis Suarez that was deflected right to his foot. He in turn found the Uruguayan who he then lobbed through on frame to only tap past the onrushing keeper for the game’s second goal.

Rakitic then lobbed Suarez through yet again only for the striker to square to Lionel Messi to score the final goal of the game. Granada’s strike arrived from the spot through Fran Rico inside the 53rd minute.

Following this win, Barca now focus on their midweek Copa del Rey semifinal clash against Villarreal in the second leg on the road.

Atletico Madrid tied Sevilla, 0-0, on the road in a game where the home side had plenty of chances to break the deadlock. The most notable opportunity the hosts had was inside the 27th minute when Vicente Iborra hit a cross off the post which was then cleared away from danger.

The referee did steal the show by giving seven yellow cards to the visitors while only handing out four to the hosts.

The best performer from the weekend was none other than Alberto Bueno who hit four goals against Levante in a 4-2 victory for Rayo Vallecano.

Here are the full results from La Liga this weekend:

Borussia Dortmund’s resurgence continued with a win this weekend.

BVB blasted Schalke 04 in the Revierderby, 3-0, with all of the goals arriving in the final 12 minutes of the game. The onrush started when Pierre-Emerick Aubameyang finished off the through ball from Henrikh Mkhitaryan by slotting it home inside the near post in the 78th minute.

Just a minute later, Ilkay Gundogan’s cross was hit home at the far post by Mkhitaryan to double the lead. The final dagger arrived in the 86th minute when Marco Reus tackled the ball away from the keeper’s foot into the back of the net.

The other game worth mention this weekend was yet another thriller played by Wolfsburg who won 5-3 on the road against Werder Bremen. The home side led 3-2 at the break, but after that fifteen-minute breather, the visitors took over as Bas Dost hit a brace before Daniel Caligiuri completed his own later on.

Here are the results from the German Bundesliga this weekend:

Lazio romped Sassuolo on the road by the score of 3-0. The scoring commenced right before halftime when Felipe Anderson curled a beauty from 20 yards out inside the top corner. Miroslav Klose doubled the scoreline in the 70th minute when he headed home a cross from Anderson who sent the ball in front the right flank. The final goal arrived from Marco Parolo who picked up the loose ball inside the area, dribbled towards frame then slammed one past the keeper.

Despite slightly outplaying their visitors, Inter Milan dropped all three points against Fiorentina courtesy of Mohamed Salah’s 56th-minute strike as he hit one inside the near post.

Here are the results of the Serie A games that were played this weekend:

The game that was on everyone’s mind ended in yet another draw as Monaco and Paris Saint-Germain held one another scoreless throughout 90 minutes.

One of the more surprising results arrived when Lille hosted and successfully defeated league-leading Lyon, 2-1. Corentin Tollisso opened the scoring only three minutes in when he tapped home the corner sent in from the left. Idrissa Gana Gueye completed a give-and-go with a teammate by sliding the ball home in the 57th minute before Manchester City loanee Marcos Lopes scored the winner when he dribbled towards the 18 then hammered in a low shot into the bottom far corner.

With this result, Lille jump up to eighth in the table while Lyon now only hold a one-point lead atop the table ahead of PSG with 54 points to their 53.

Here is a list of the results from Ligue 1 this weekend: