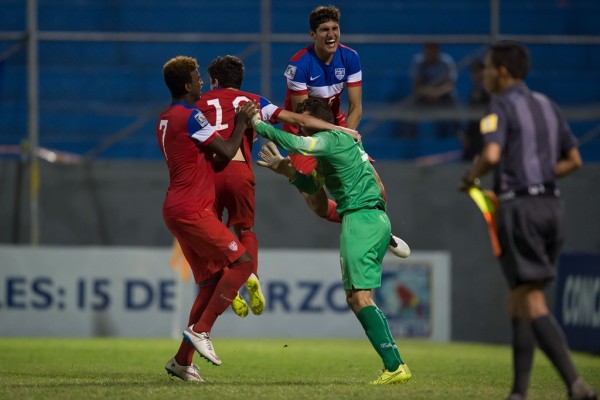 After failing to qualify for the Under-17 World Cup in 2013, the United States Under-17 National Team have sealed their passage to this year’s tournament in dramatic fashion.

The U.S. U-17s qualified for this fall’s tournament by defeating Jamaica, 5-4, in a penalty kick shootout after both teams were held scoreless in regulation.

The Americans, did themselves no favors as they ended up missing the first spot kick in the shoot-out. Luckily for them, Jamaica failed to convert their second opportunity and everything stayed tied up until the sixth round of the penalty shoot-out. U.S. defender Alexis Velela drilled his kick from the spot before Jamaica failed to equalize, sending the United States to the 2015 Under-17 World Cup in Chile.

Even though, the United States controlled most of the early first half, they failed to really create any dangerous goal scoring opportunities, as both teams ended up the first half with 4 shots.Possession was controlled by the U.S., however, and this was due to a very active Christian Pulisic that orchestrated the American midfield.

Pulisic ended up creating most of the United States’ chances by implementing himself into the attacking third, and going up the left flank in order to make dangerous crosses throughout the game. Fortunately for Jamaica, no United States forward was capable of ever getting on the end of those crosses, largely due to a back-line that was led by a very on point Javian Brown.

Jamaica was capable of keeping the game tied in regulation in large part due to the success that Brown and Fabian Grant had in keeping a solid defensive line. Even when Pulisic or Joshua Perez were capable of sending in a dangerous pass into the box that happened to get past the back-line, Jamaican goalkeeper Jahmali Waite would use his height to intercept the ball in the air.

The second half was not far from a completely dominating performance for the United States. In the this half the American ended up getting 7 off 7 shots, but yet again the story of the first half ended up repeating itself as they failed convert for a goal.

Defender John Nelson ended up getting more into the United States attack, and this eventually allowing Joe Gallardo, Pulisic, and Perez in some dangerous shots. Eventually, this led to a dangerous shot by Perez that was inches from scoring, but Waite ended up stopping the shot at goal for Jamaica.

Between the 65th and 70th minute of the game, the U.S. had three dangerous shots, with one of the goal scoring opportunities coming via a Haji Wright flicked header towards goal off of a Pulisic corner that a Jamaican defender cleared for a throw-in.

Jamaica got closest to scoring off of a counter after catching the United States too high up. The American defense was quick to recover and eventually regained possession, but as the game went on, Jamaica showed signs of exhaustion as the United States still looked sharp.

The final minutes of the game saw some the United States ending the game as the better team, but failing to convert off of a couple of Pulisic and Gallardo crosses.

However, United States still qualified for the Under-17 World Cup after both teams took 6 spot kicks, but Jamaica failed to convert in sudden death.

The FIFA Under-17 2015 World Cup in Chile kicks off on October 10 of this year, as the United States look to winning their first ever FIFA sanctioned tournament. Their best finish in the tournament has been 4th place in 1999.