Dominant second half propels Red Bulls to another victory over NYCFC 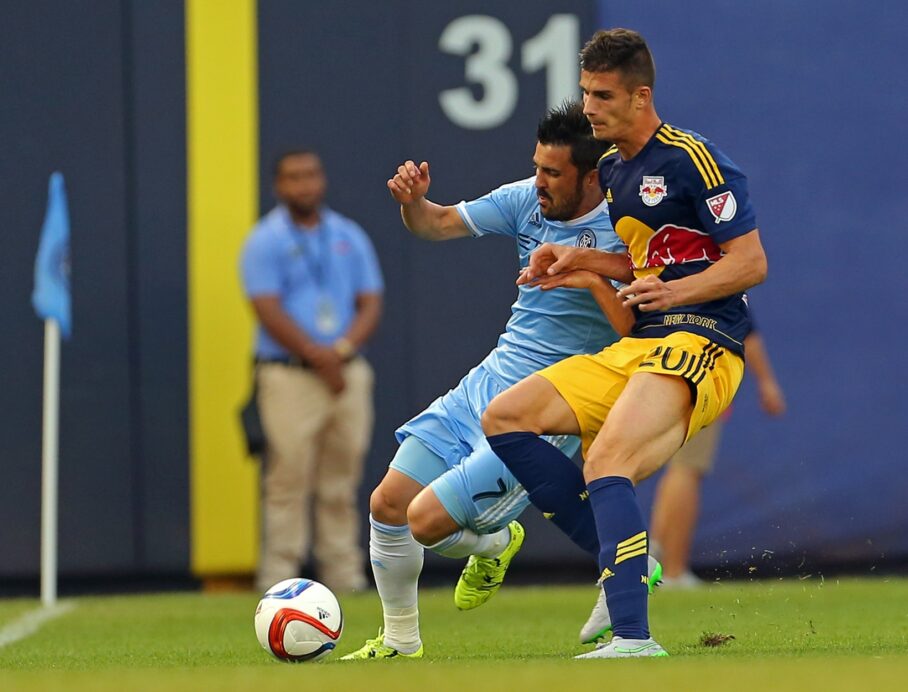 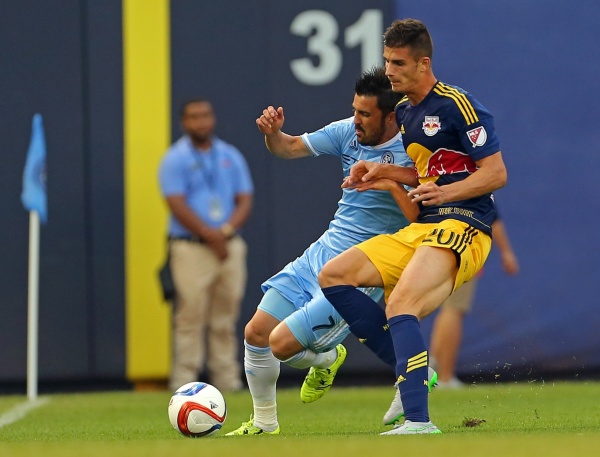 NEW YORK — Halftime adjustments are discussed and executed by a losing side all the time, but rarely do they work out the way they did for the New York Red Bulls on Sunday.

Playing in front of 48,047, including Frank Lampard and Andrea Pirlo, the Red Bulls spoiled what was looking like a pleasant afternoon for New York City FC, and defeated their crosstown rivals with a 3-1 result.

All three of the visitors’ goals came in the second half, after they headed into the break trailing 1-0. The equalizer came in 47th minute as reigning MLS Golden Boot winner Bradley Wright-Phillips volleyed home a cross from the left flank by Sacha Kljestan to beat NYCFC goalkeeper Josh Saunders.

The go-ahead goal came not so long after, as Chris Duvall put away a headed pass from Anatole Abang with a volley as well — this time closer to the net — in the 52nd minute.

With NYCFC’s defense looking fragile, the Red Bulls continued their pressure and Matt Miazga put the game away in the 73rd minute with a well-placed header from a set piece cross by Kljestan.

“We talked a lot about learning about ourselves and growing as individuals and as a team, and a lot of it has been — whatever you want to call it — a competitive edge or killer instant, the sense and belief that when the times are toughest that we were going to respond,” Red Bulls head coach Jesse Marsch said after the game.

“So when we were down 1-0, I felt like we systematically went about the game knowing that it was going to come, come out the second half right away and get the lead and just push it from there,” Marsch added. “I’m proud of my guys tonight and they showed a lot of character.”

The three goals marked the first time the Red Bulls have scored more than twice this MLS season, and the rate at which these tallies came by stunned the capacity crowd in the Bronx, apart from the traveling South Ward.

NYCFC looked to be in control of the contest in the early going when Tommy McNamara, who was making his fourth start of the season, opened the scoring in the sixth minute. The hosts controlled the tempo and possession of the game until the latter stage of the first half before the momentum tilted completely after the break.

“I think the second half was a continuation of the end of the first half to be honest,” NYCFC head coach Jason Kreis said after the game. “I thought we did a real nice job how we started the game and for the first five, 30 minutes, it was real good.

“Then after that it was real poor, and we got away from everything we’ve been trying to do for the past several weeks and months and that, to me, is very disappointing.”

One of the problems NYCFC had to deal with during that stretch was an apparent knee injury to left back Chris Wingert, who was involved in a nasty collision with a Red Bull player near the 20-minute mark.

Wingert was treated by a trainer near the sideline before coming back into the contest shortly after, but the injury appeared to be serious enough as Kreis opted to bring in Jeb Brovsky as a substitute in the 24th minute.

Wingert had started all 17 games for NYCFC this season and the combination of him, Shay Facey, Jason Hernandez and R.J. Allen had meshed well over the last two games, allowing just one goal over the 180 minutes.

“I do think that affects the game,” Kreis said on the change. “I’m a guy that never likes to take a defender out of the matches, and have make a substitution so early, that was really difficult for us. So I think the cohesion dropped off a little bit from there.”

Kreis, however, does not yet know the severity to Wingert’s injury.

The result snapped a three-game winning streak for NYCFC and gave Red Bulls consecutive wins after they went through a five-game winless stretch.

Up next for NYCFC will be a trip to Montreal on July 4 to take on the Impact, who they had beaten two weeks ago at Yankee Stadium by the score of 3-1. The Red Bulls, meanwhile, will travel to Columbus, Ohio to take on the Crew on the same day.