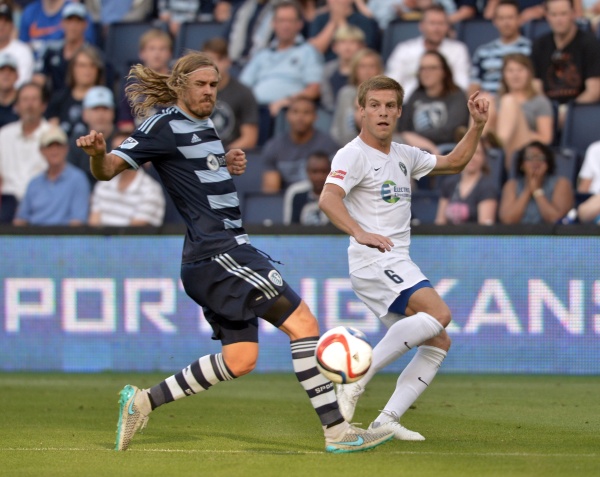 It may have taken a bit longer than expected, but Graham Zusi’s finish proved to be just enough to see Sporting KC book a spot in the fifth round of the U.S. Open Cup.

Sporting KC won the team’s first U.S. Open Cup match of 2015 with a 1-0 win over St. Louis FC, as Zusi scored the game’s only goal with a header in the 70th minute.

While St. Louis FC’s hard-working defense kept Sporting KC from scoring for 70 minutes, it wasn’t enough to advance to the next round of the Open Cup.

When Sporting KC finally broke down St. Louis FC’s bunker in the 70th minute, the team took the 1-0 lead with a Graham Zusi goal from a header. Benny Feilhaber recorded the assist with an early cross.

In the moments leading up to the goal, St. Louis players hardly left their own half of the field and were visibly exhausted while defending.

Sporting KC had a shout for a penalty in the 53rd minute as St. Louis FC midfielder Brandon Barklage tackled Graham Zusi down in the box, but the call wasn’t given by the referee Baboucarr Jallow.

St. Louis FC only recorded three shots in the match, the most promising of which Mike Ambersely shot into the side netting in the 83rd minute after a counter attack.

Sporting’s lineup in the match featured several regular first team players. Only two differences were made from Kansas City’s June 6 match against the Seattle Sounders in MLS play.

In addition to the victory, SKC defender Chance Myers came back to make his return from an injury sustained over a year ago to start at rightback. He was subsituted in the 47th minute for rookie Saad Abdul-Salaam.

With the win, Sporting KC progresses to the fifth Round of the U.S. Open Cup. The draw to decide which team SKC faces takes place Thursday.