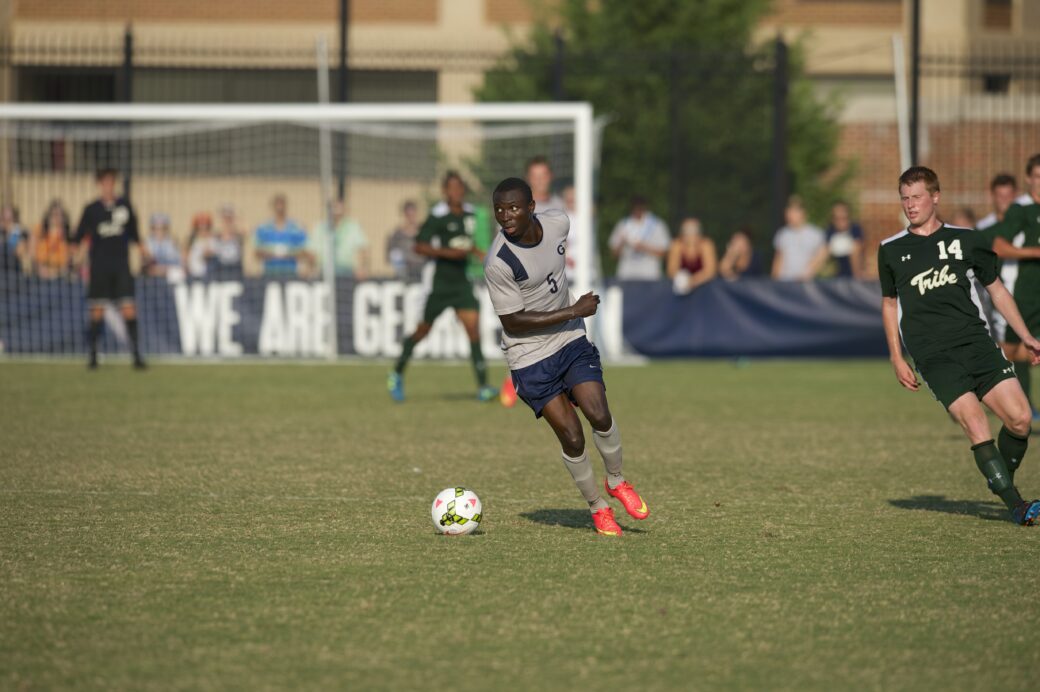 Georgetown defender Joshua Yaro isn’t feeling burdened by expectations. Widely regarded as the best defender, if not player, in the country, Yaro is almost a lock to be one of the top players drafted when and if he opts to pursue an MLS career.

Yet, the weight of recognition does little to phase the junior defender, because the expectations placed upon him by others pale in comparison to the ones he places on himself and his team.

“To, me that’s motivation to do better because every player in the country is working extra hard to try and improve themselves. It’s good to get the recognition, but it’s just a step for me to push myself harder to be a better player than I was last year.”

To be fair, it will be pretty difficult for Yaro to improve on his performances of 2014, a season that saw the defender named Big East Player of the Year, while earning recognition as a semifinalist for the Hermann Trophy. Those accolades led many to believe that Yaro was MLS-bound, including some of his own classmates and friends.

But it wasn’t the right time, Yaro said, citing his dreams of attaining a degree and someday giving back to his native Ghana with a degree from Georgetown in tow.

“It was a pretty hard decision, but then again, I had a plan coming into college and I knew that I wanted to get my degree,” Yaro said. “When that decision came, it was hard, but I knew I had a plan and I stuck to my plan to finish my degree. It wasn’t the right time for me, and a lot of people I’ve talked to think I was crazy to turn it down. We are all different, but to me my degree is just as important as playing professionally.

“Everyone thought I was going to leave, but I definitely feel comfortable and I feel happy with the decision I made.”

Now having made that decision, Yaro is looking to improve himself as a soccer player. A pacey centerback with athleticism to spare, Yaro is one of the most formidable defenders in the country due to his combination both both mental and physical speed.

Yet, Georgetown head coach Brian Wiese says his favorite part of Yaro isn’t his top-end pace or his ability to read the game; it’s his personality.

One of Wiese’s favorite aspects of Yaro is his relentless pursuit of making others happy. The Georgetown head coach says that its not infrequent to bump into Yaro in the school’s compliance office, just checking in to see how everyone’s day is.

That maturity and generosity are what Wiese thinks sets Yaro apart. The Georgetown head coach cited an anecdote that the players that leave early for the pros are the ones lacking the mental aspect needed for the next level, while the players that stay are more than mature enough to have made the jump.

For Wiese, who been around and coached pros like Matt Besler, Harry Shipp and Dillon Powers, that has never more apparent than with Yaro.

“He’s got a wonderful, humble way to him,” Wiese says. “He’s a leader and he’s always looking to help. He has time for everybody and he’s a special individual.

“He’s someone that everyone he comes into contact with walks away just a little bit starstruck with how he handles himself and how he handles people.”

The next step, Wiese says, is for Yaro to remember to do the little things. Blessed with freak athleticism, it’s easy for Yaro to get by on speed and strength alone.

Yet Wiese says that, over the years, Yaro’s positioning has improved. His passing? “Very good”. His maturity? Through the roof. Now, it’s just putting it all together, and, in the process, becoming the best player he can be.

“I think when you get someone as athletic as Joshua,” Wiese said, “a lot of times you have to remind him of habits that maybe some not as athletic players have to do to be successful in terms of little details. Joshua is doing those little things, and he becomes incredibly difficult to beat.

“He’s got all the tools, if there’s a player that has little or no weakness, Yaro will fit that bill.”

With pro decisions behind him and expectations firmly grasped, Yaro is looking forward to the start of the season and, more importantly, glad to be staying where he feels he belongs for the time being.

“That’s not changed,” Yaro said. “Nothing is different, but I have another opportunity do well on the field. I just want to do better than I did last year.