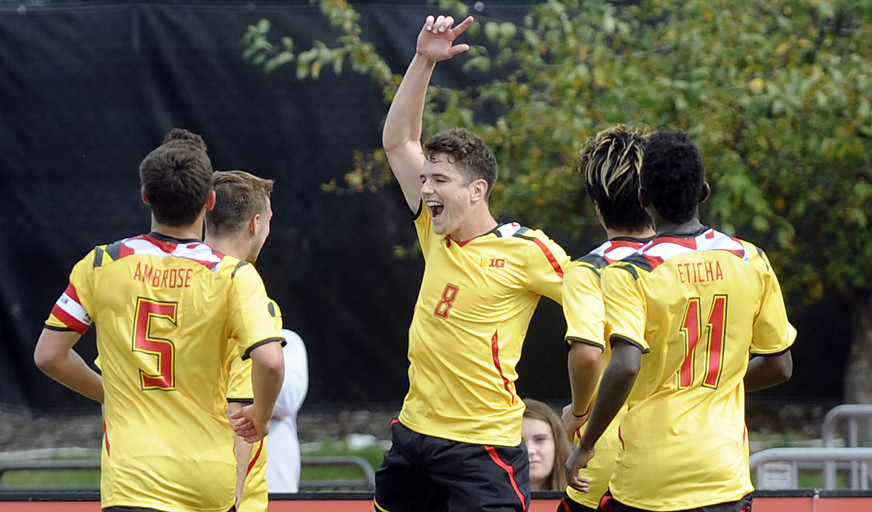 After a productive but disappointing 2014, Mael Corboz wants nothing more than to be the best by the end of the 2015 season.

The Maryland Terrapins had an atypical start to last year as the team struggled to find wins early in the campaign. But when someone needed to step up, Corboz led the way. The goals started to pour in for the midfielder and the team’s successes followed. The Terrapins went on to win their last eight regular season games and win the Big Ten Tournament.

“One of our key components was Mael Corboz,” head coach Sasho Cirovski told SBI. “His ability to serve good balls in and to score goals, he ended up being our leading scorer last year, which is quite remarkable for a deeper-lying midfielder.”

Cirovski added that Corboz still shows a lot of promise to develop into an even better player. One thing Corboz, himself, wanted to address before heading into his senior year was his size and strength.

“I like to stay technically sharp, work on my free kicks and all that, but I think I put pretty special emphasis on strength training this summer,” Corboz said. “Obviously with (Alex)Crognale and a few other guys who were around this summer, we were in there quite often, so I think that’s something I added to my summer schedule that I don’t normally emphasize.”

While Corboz still sees plenty of room for improvement, his ability to produce coming from a defensive role caught not only the eyes of Terrapins fans but also U.S. Soccer.

“It was obviously a great experience to be with a bunch of guys we normally play against, really good players who we saw them in a different scope as friends and teammates,” Corboz said of the U.S. camp.

“It was also great just to be in that setup and be kind of integrated with the (U.S.) national team staff and all that, so it was very positive.”

Maryland had three players called into the U.S. camp, tied for the most of any college across the U.S., and head coach Cirovski told SBI that the call-ups didn’t surprise him because each player has what it takes to make it at the next level, especially Corboz.

“We take a lot of pride in not only recruiting good players but also helping them develop into better players,” Cirovski said of the Maryland soccer program.

“He’s an exceptional player, extremely gifted technically,” the head coach added of Corboz. “He has a great tactical soccer mind, and he’s a mentally tough competitor, so that led to him being one of the keys to our success last year.”

Normally positioned to play as a defensive midfielder, Corboz’s 10 goals in 2014 were an added bonus to the successes of Maryland, which went on to win the conference tournament during its first season in the Big Ten.

Now entering his senior year, Corboz is expected to be a leader, especially with 11 freshman entering the fray. And Cirovski is confident that Corboz can be the good influence needed to have another strong season.

Despite winning the conference title and scoring a team-best in goals scored, Corboz said that overall, last year was a little disappointing because Maryland is expected to be the best each and every year, and despite winning what they did, they exited the NCAA Tournament early.

However, after a summer full of training, he appears ready to help lead his team to success yet again.

“Every year at Maryland, we expect to contend for a national title,” Corboz said, “so I think this season would be a disappointment if we don’t make it to the national championship, and obviously people say we have too many freshman, we lost too many key guys, but I’m very confident that we’ll be as good and more talented than last season.”