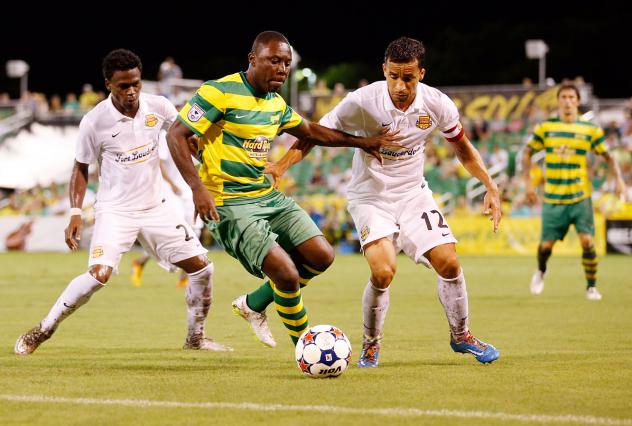 Only two weeks remain in NASL regular season action, but there is still a fair amount to be decided.

Three teams have locked up their spots in the playoffs, but their seeding is still up in the air, as is the fourth and final playoff participant.

The Ottawa Fury may have won the Fall Season title with a midweek result, but the New York Cosmos could still usurp the side as first in the combined standings in order to win the top seed this postseason.

Meanwhile, the Fort Lauderdale Strikers face the tough task of fending off the Tampa Bay Rowdies for the fourth and final spot.

Before last weekend, the Fort Lauderdale Strikers would have easily fancied Indy Eleven as one of the easiest teams to play at the end of the season. After Eleven put on a clinic at home against Minnesota United, though, the Strikers will be rethinking this weekend’s match.

The Eleven were firing on all cylinders last Saturday night, with three splendid goals helping them ease past a United side that had been the hottest in the league.

Look for more fine attacking performances from Duke Lacroix, Don Smart and Dylan Mares this weekend, as the Eleven try to spoil the postseason party for the Strikers.

After an uninspired draw midweek, the Strikers need a win this weekend to keep a firm hold on the last playoff spot. Currently, only two points separate the Strikers from the fifth-place Tampa Bay Rowdies.

Although the Brazilian connection has worked more often at home than on the road, look for PC, Marlon Freitas and Stefano Pinho to take control of this match.

With the last playoff spot still up for grabs, Stuart Campbell will have his Tampa Bay Rowdies side ready and raring to go this weekend against the Carolina RailHawks.

After three draws and a loss in their last four games, the Rowdies need to snap back to early-season form and win the last two matches to secure a postseason spot.

The men to finish off the RailHawks are still Freddy Adu and Brian Shriver, who have been hotter than anyone else for the Rowdies over the past month.

The RailHawks will not be looking to lie down on Saturday, as the team has already played spoiler by denying FC Edmonton of a crucial win a few weeks back.

In similar fashion to the Rowdies, there are two attacking talents that have stood out at the tail-end of this NASL season for the RailHawks. Nacho Novo and Nazmi Albadawi have been those standout players, with Tiyi Shipalane also contributing in a meaningful way.

Minnesota United are cemented into the playoff matchup between the second and third seeds, but Manny Lagos’ men will still be playing to find form as the regular season tails off.

After a very unexpected 3-1 away loss to Indy Eleven last weekend, United should be fired up to earn a result at home so close to the postseason.

In that game, United could not hit its full potential and display the high level of free-flowing football that it was previously displaying on a weekly basis.

This might have been a minor blip in the team’s performance, and United will hope ride the play from Ibson, Christian Ramirez, Daniel Mendes and Pablo Campos to a victory this weekend.

The Atlanta Silverbacks will be playing just for pride on the road this weekend, as they are mathematically eliminated from the playoff.

While the Silverbacks have shown numerous times this season that they can compete in the attack with some of the best teams in the league, their defensive frailties have let them down and cost them too many points.

Junior Burgos and Jaime Chavez are the attacking weapons to watch out for in black and red this match.

(UPDATE-The match start time was moved up due to extreme weather conditions in the San Antonio area.)

The New York Cosmos travel to San Antonio needing to win out in order to take the top playoff seed from the Ottawa Fury.

Under Gio Savarese, expect the Cosmos to be mentally prepared and looking to impress with just two matches to go before the postseason.

Look for the incredible skill and soccer mind of Raul to be on display in the final games of his storybook career. Alongside the Spanish legend, watch for young gun Leo Fernandes and new signing Gaston Cellerino to make waves as they head into the playoffs.

The San Antonio Scorpions might not have a chance to make the postseason, but the home team will certainly be looking to give their fans something to cheer for after an abysmal 2015.

After winning the Soccer Bowl just a year ago, the Scorpions sit near the bottom of the table in the combined standings.

While it has been Marvin Chavez and Omar Cummings carrying the attacking load for the majority of the season, rookie Kris Tyrpak has been the one coming up with goals as of late.

FC Edmonton was holding onto their playoff lives by a thread, and the Jacksonville Armada came and cut that thread by defeating the Canadian side last weekend in Florida.

The Eddies now host the Armada in what could either be a chance at revenge, or a half-hearted final game of the season.

Edmonton rode the success of Daryl Fordyce late in the Fall Season, with help from Tomi Ameobi and Dustin Corea coming early and often.

The Armada have perhaps had a wider group of contributors this season, even though those contributions didn’t put them close to a postseason birth.

Pascal Millien, Jaime Castrillon, Akeil Barrett, and Alhassane Keita have all been influential for Jacksonville this fall.