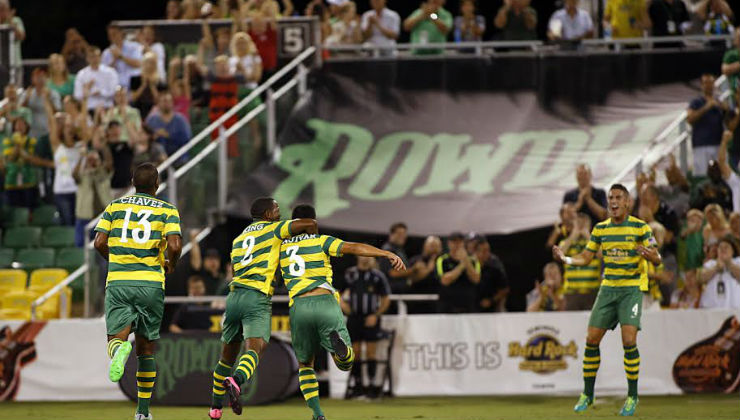 The Fort Lauderdale Strikers have lost the chance to control their own post-season destiny, giving the Tampa Bay Rowdies their own chance at the Soccer Bowl.

The Strikers went to Indianapolis with the expectation of three points and a chance to clinch the fourth and final playoff spot, but the Eleven pulled off their second upset in two weeks to deny the team from southern Florida. With the result, the Strikers fell to fifth place with just one game left to play.

Meanwhile, the Rowdies took full advantage of their opportunity and beat the Carolina RailHawks at home to jump into fourth in the combined standings. The Rowdies now sit a point above the Strikers, and are in full control of their playoff destiny.

Elsewhere, Minnesota United secured yet another home win over the Atlanta Silverbacks.

Here is a closer look at this weekend’s results:

STRIKERS FALL OUT OF PLAYOFF SPOT WITH LOSS TO INDY

With everything to play for, the Fort Lauderdale Strikers failed to earn a result on the road on Saturday, falling 2-1 to Indy Eleven.

Don Smart got things started in the 19th minute, continuing his hot streak with a goal in front of 9,213 home fans.

The Strikers allowed Smart way too much room in the middle of the field, and Smart dribbled to the top of the box and fired home with a curved shot to the lower right corner.

Eleven continued to put the pressure on before doubling the lead just before halftime.

In the 43rd minute, Dylan Mares set up for a free kick from deep on the right flank.  The aerial ball was whipped in and smashed home by a Brian Brown header to the near post.

Jose Angulo brought one back for the Strikers in the 59th minute to halve the home team’s lead. The substitute took intercepted a poor clearance from Indy’s defense and lifted the ball to the near post upper-90 to put his side back in it.

After the Strikers failed to secure a point in Indianapolis, the Tampa Bay Rowdies put up the 1-0 victory they needed over the Carolina RailHawks to slide into the final playoff spot.

A spectacular 12th minute strike from Richard Menjivar was all Stuart Campbell’s men needed to put the result away and leapfrog their southern Florida counterpart into fourth place in the combined standings.

A Freddy Adu cross into the box was poorly cleared into the center of midfield, where Menjivar was eagerly awaiting it. The Salvadoran central midfielder had time and space to calmly control the ball before striking an outside-of-the-foot curving ball just inside the near post.

The Rowdies now sit on 39 points going into their final match of the regular season.

Essentially stuck in the third playoff seed, Minnesota United still came out with a performance worthy of three points as they defeated the Atlanta Silverbacks 1-0 at home on Saturday night.

It was Christian Ramirez who put home the game winning penalty in just the ninth minute for his 12th goal of the season.

The penalty was drawn by Kalif Alhassane, who was brought down after running onto a through ball and creating danger in the box.

Two late goals in Canada led to a 1-1 draw between FC Edmonton and the Jacksonville Armada in a match that had no post-season implications.

Last week, an uncharacteristic win from the Armada over the Eddies destroyed the Canadian side’s playoff hopes. When the Armada took a late lead once again in this match, it seemed that Edmonton fans would end the season with their face in their palms.

A red card for Edmonton’s Ritchie Jones in the 67th minute looked to make for a grim finish to the season for the Canadian side. However, there was still plenty of action to come.

In the 77th minute, Edmonton defender Albert Watson redirected the ball into the back of his own net for an own goal and a 1-0 lead for the Armada. Jemal Johnson took the ball down the left wing and sent in a cross, but Watson got a foot on the ball and it fired past the Edmonton goalkeeper for the first goal of the match.

The Eddies would earn some salvation in the waning moments of the match, though. Mallan Roberts headed home in the 90th minute off of a Sainey Nyassi cross to level the score and give the home fans something to cheer about.